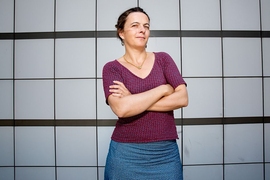 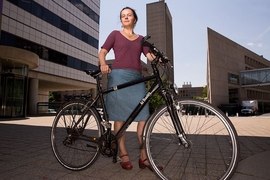 From the increasing information transmitted through telecommunications systems to that analyzed by financial institutions or gathered by search engines and social networks, so-called “big data” is becoming a huge feature of modern life.

But to analyze all of this incoming data, we need to be able to separate the important information from the surrounding noise. This requires the use of increasingly sophisticated techniques.

Alice Guionnet, a professor of mathematics at MIT, investigates methods to make sense of huge data sets, to find the hidden correlations between apparently random pieces of information, their typical behavior, and random fluctuations. “I consider things called matrices, where you have an array of data,” Guionnet says. “So you take some data at random, put it in a big array, and then try to understand how to analyze it, for example to subtract the noise.”

The field of random matrix theory, as it is known, has grown rapidly over the last 10 years, thanks to the huge rise in the amount of data we produce. The theory is now used in statistics, finance, and telecommunications, as well as in biology to model connections between neurons in the brain, and in physics to simulate the radiation frequencies absorbed and emitted by heavy atoms.

A world-leading researcher in probability, Guionnet has made important theoretical contributions to random matrix theory. In particular, she has made recent advances in understanding large deviations — the probability of finding unlikely events or unusual behavior within the array of data — and in connecting the theory with that of topological expansion, in which random matrices are used to help solve combinatorial questions.

“It’s a bit like when you make a patchwork quilt,” Guionnet says. “So you have all of your pieces of patchwork, and then you go to sew them together so that they make a nice pillow with no holes, and you have many possibilities for how to lay them out,” she says.

Random matrices can be used to calculate the number of ways in which this “patchwork” can be sewn together, Guionnet says. She also considers several of these random arrays simultaneously, to help solve problems in the field of operator algebra.

Guionnet was born in Paris. She completed her master’s degree at the Ecole Normale Superieure Paris in 1993, and then moved to the Universite Paris Sud to undertake her PhD. The focus of her PhD was the statistical mechanics of disordered systems, a branch of mathematical physics in which the world around us is modeled down to the level of microscopic particles. In this way, researchers attempt to determine how microscopic interactions affect activity at the macroscopic level.

In particular, Guionnet was interested in objects called spin glasses — disordered magnetic materials that are similar to real glass, in that they appear to be stationary, but which are actually moving, albeit at an incredibly slow rate. “If you looked at the windows of your house millions of years from now, they may be shifting downward as a result of gravity,” she says. “I was attempting to analyze the dynamics of these kinds of systems.”

Before she had completed her PhD, Guionnet was offered a position within the French National Center for Scientific Research (CNRS), and moved to Ecole Normale Superieure (ENS) Lyon, where she continued to focus on the spin glass model, before branching out into random matrices. “I initially wanted to work in applied mathematics,” Guionnet says. “But as I started to consider questions in random matrix theory, I moved into purer and purer mathematics.”

While at ENS Lyon, she was made a director of research for CNRS, and was given the opportunity to build her own team of top researchers in probability theory.

She moved to MIT in 2012, where she continues her work in random matrix theory. In the same year, Guionnet was chosen as one of 21 mathematicians, theoretical physicists, and theoretical computer scientists named as Simons Investigators. Awarded by the Simons Foundation, a private organization that aims to advance research in math and the basic sciences, Simons Investigators each receive $100,000 annually to support their work.

“What I like about my work is that it crosses over into different fields — probability theory, operator algebra, and random matrices — and I’m trying to advance these three theories at the same time,” Guionnet says. “These different fields are all merging and connecting with each other, and that is what I try to understand in my work.”

What’s more, the math itself is always evolving and progressing, she says: “Mathematics is beautiful.”