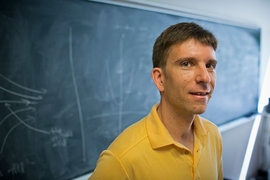 It’s something children do every day when blowing bubbles: Stick a circular wire in a pot of soapy water, pull it out, and behold the film forming across it.

But it’s not only children who are amused by this phenomenon — which has also kept mathematicians occupied since the 18th century, says William Minicozzi, a professor of mathematics at MIT.

That is because the film that forms across the wire pulls itself as tight as possible in order to minimize its surface tension. This results in a surface that has the least possible area for that fixed boundary. Even if you bend the wire, this so-called “minimal surface” will still form.

Mathematicians have studied minimal surfaces theoretically since the 1700s. Then in the 1880s, Belgian physicist Joseph Plateau began experimenting physically with these soapy films. He questioned whether for every possible curve that could be made to the wire, a minimal surface would form with that shape as its boundary. Although intuition would tell you that it should do this, there is no way to physically test the infinite number of possible variations that could be made to the shape of the wire in order to provide mathematical proof, Minicozzi says.

Answering Plateau’s question — and addressing subsequent conjectures on the properties of complex minimal surfaces — has kept mathematicians busy ever since. The most notable of these researchers in recent years have been Minicozzi and his colleague Tobias Colding, the Cecil and Ida Green Distinguished Professor of Mathematics at MIT. Together, Minicozzi and Colding are widely considered to be the world’s leading geometric analysts of their generation.

In 2004 the duo jointly published a series of papers in the Annals of Mathematics that resolved a number of longstanding conjectures in the field; this earned them the prestigious Oswald Veblen Prize in Geometry.

The pair proved that all so-called “embedded minimal surfaces” — those that are not self-intersecting — can be cut into a collection of simple pieces where each is very flat (like a plane) or part of a helicoid. Helicoids are shaped like double-spiral staircases; the structures can also be found in many parking garages, Minicozzi says.

“If you drive into a parking garage and go up a level, that spiral ramp is part of a helicoid,” he says. “And one of the things we were able to show was that every embedded minimal surface could be built out of these things. So the minimal surface either looks like a nice flat thing where the area is bounded, or it looks exactly like one of these double spiral staircases.”

‘A wave of new results’

Awarding Minicozzi and Colding the Veblen Prize in 2010, the American Mathematical Society said the “profound” work had yielded a “remarkable global picture” for bounded minimal surfaces, and had “initiated a wave of new results.”

Minicozzi graduated from Princeton University in 1990, and moved to Stanford University to complete his PhD. He first began working with Colding in 1994, when the researchers were both at the Courant Institute at New York University. Together they solved a conjecture of Shing-Tung Yau that had been open since the 1970s concerning Riemannian manifolds, or curved spaces.

They continued collaborating after Minicozzi joined Johns Hopkins University in 1994, where he became a professor of mathematics in 2000 and a Krieger-Eisenhower Professor in 2007.

In 2012 Minicozzi joined MIT, where he was reunited with Colding; the researchers have recently been investigating how surfaces change over time, a process known as mean curvature flow. In particular, they have been looking at the formation of singularities, or conelike bumps where the smoothness of a surface breaks down.

They have been able to prove, he says, that of the infinite number of singularities that could possibly affect a surface through this curvature flow, only two types are stable enough to survive in reality. “If you were to wiggle your surface ever so slightly, in fact only two are stable of the infinitely many that are possible,” Minicozzi says. “So if you are trying to understand [mean curvature flow] and you have to deal with all of these cases, it’s much better to have to deal with two cases than an infinite number.”

This year Minicozzi and Colding have answered another open question in curvature flow: whether a given singularity — known as a “shrinker” — will appear different when viewed at different levels of magnification. “If you look at it under a more powerful microscope you may see an entirely different shrinker,” Minicozzi says.

Still fascinated by the field, the two researchers have already moved on to attempting to solve another longstanding conjecture in curvature flow.