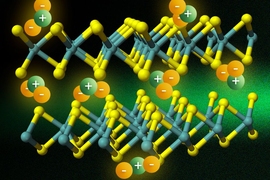 ↓ Download Image
Caption: Shown here is the crystal structure of molybdenum disulfide, MoS2, with molybdenum atoms shown in blue and sulfur atoms in yellow. When hit with a burst of laser light, freed electrons and holes combine to form combinations called trions, consisting of two electrons and one hole, and represented here by orange and green balls.
Credits: Illustration: Jose-Luis Olivares/MIT

Caption:
Shown here is the crystal structure of molybdenum disulfide, MoS2, with molybdenum atoms shown in blue and sulfur atoms in yellow. When hit with a burst of laser light, freed electrons and holes combine to form combinations called trions, consisting of two electrons and one hole, and represented here by orange and green balls.
Credits:
Illustration: Jose-Luis Olivares/MIT

It’s a well-known phenomenon in electronics: Shining light on a semiconductor, such as the silicon used in computer chips and solar cells, will make it more conductive. But now researchers have discovered that in a special semiconductor, light can have the opposite effect, making the material less conductive instead.

The phenomenon was discovered in an exotic two-dimensional semiconductor — a single layer of molybdenum disulfide (MoS2) just three atoms thick. The finding is reported in a paper in Physical Review Letters by MIT postdoc Joshua Lui; Nuh Gedik, the Lawrence C. and Sarah W. Biedenharn Career Development Associate Professor of Physics; and six others at MIT, Harvard University, and in Taiwan.

The researchers found that when illuminated by intense laser pulses, single-layer MoS2 is reduced to approximately one-third of its initial conductivity. The team used optical laser pulses to generate the effect and time-delayed terahertz pulses to detect the conductive response of the material.

“By measuring the transmission of the terahertz radiation through the material, we can extract its electrical conductivity,” Gedik says. “This approach is more convenient than conventional methods that attach electrical contacts to the samples and measure the current.”

When a semiconductor is illuminated by light, its conductivity tends to increase. This is because light absorption generates pairs of loose electrons and holes — places in a material with “missing” electrons — that facilitate the flow of electrical current through the material. This phenomenon has been the basis for designing and optimizing optoelectronic devices such as solar cells, digital cameras, and other light detectors.

The strong electrostatic interactions give rise to an interesting effect: When light generates an electron-hole pair in the material, instead of flying off freely as they would in a three-dimensional solid, they remain bound together. Such a bound state is called an exciton.

In fact, the interactions in single-layer MoS2 are so strong that excitons can capture extra free electrons in the material and form bound states with two electrons and one hole.

“These complex particles are called trions,” Lui says. “They are analogous to negatively charged hydrogen ions, which consist of two electrons and one proton.”

In single-layer MoS2, trions have the same net charge as an electron, but a mass roughly three times that of an electron. “Their much heavier mass dulls their response to the electric field, and lowers the material’s conductivity,” Lui says.

Instead of increasing the population of free charges, the illumination actually converts the original free electrons into heavier trions with the same charge density. This is the reason for the reduction of conductivity of single-layer MoS2 under illumination.

“This is a new mechanism of photoconduction in semiconductors,” Gedik says, “which has not been observed before.”

“Although negative photoconductivity has been reported in some semiconducting systems, it always arises from extrinsic factors, such as defects,” Lui adds. “In this case, it is an intrinsic property of the crystal.”

Trions are known to be unstable particles that usually appear at very low temperature and last for an extremely short period of time — so it has been very challenging to detect their influence on materials’ conductivity. “In single-layer MoS2, the trionic effect is so strong that we can see it even at room temperature,” Lui says. “Although the trions live for less than a billionth of a second, our ultrafast terahertz technique can detect them before they decay.”

Gedik says that the work “might help us to realize room-temperature excitonic devices,” which would otherwise require extremely low temperatures. In addition, because the effect can be switched on and off using light pulses, such devices could be easy to control without wired connections.

So far, the team has only studied the effect in MoS2, which belongs to a family of new two-dimensional semiconductors. “There are other types of two-dimensional materials with [similarly] strong trionic effect.” Lui says. “They are likely to exhibit the same photoconduction phenomenon”.

Xiaodong Xu, a professor of physics at the University of Washington who was not involved in this research, says it is “a piece of interesting and solid work.” He adds, “This result is another evidence of strong Coulomb interaction in MoS2, consistent with previous studies of robust trions in monolayer transition metal dichalcogenides.”

Electronics takes on a new spin