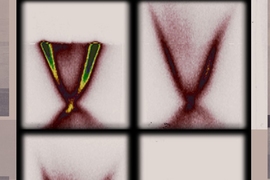 ↓ Download Image
Caption: Three-dimensional graphical representations of the way electrons respond to an input of energy, delivered by a pulse of laser light. The horizontal axis represents the electrons' momentum, and the vertical axis shows their energy. The time sequence runs from top left to bottom right, and the laser pulse arrives just before the second image, causing a sudden burst of higher energy levels.
Credits: Images courtesy of Yihua Wang and Nuh Gedik

Caption:
Three-dimensional graphical representations of the way electrons respond to an input of energy, delivered by a pulse of laser light. The horizontal axis represents the electrons' momentum, and the vertical axis shows their energy. The time sequence runs from top left to bottom right, and the laser pulse arrives just before the second image, causing a sudden burst of higher energy levels.
Credits:
Images courtesy of Yihua Wang and Nuh Gedik
Topological insulators are exotic materials, discovered just a few years ago, that hold great promise for new kinds of electronic devices. The unusual behavior of electrons within them has been very difficult to study, but new techniques developed by a team of researchers at MIT could help unlock the mysteries of exactly how electrons move and react in these materials, opening up new possibilities for harnessing them.

For the first time, the MIT team has managed to create three-dimensional “movies” of electron behavior in a topological insulator, or TI. The movies can capture vanishingly small increments of time — down to the level of a few femtoseconds, or millionths of a billionth of a second — so that they can catch the motions of electrons as they scatter in response to a very short pulse of light.

Electrons normally have mass, just like many other fundamental particles, but when moving along the surface of TIs they move as if they were massless, like light — one of the extraordinary characteristics that give these new materials such promise for new technologies.

The dramatic new results are published this week in the journal Physical Review Letters, in a paper by MIT graduate student Yihua Wang, assistant professor of physics Nuh Gedik and six other researchers.

TIs are a class of materials with seemingly contradictory characteristics: The bulk of the material acts as an insulator, almost completely blocking any flow of electrons. But the surface of the material behaves as a very good conductor, like a metal, allowing electrons to travel freely. In fact, the surface is even more conductive than normal metals — allowing electrons to travel at almost the speed of light and to be unaffected by impurities in the material, which normally hinder their motion.

Because of these characteristics, TIs are seen as a promising new material for electronic circuits and data-storage devices. But developing such new devices requires a better understanding of exactly how electrons move around on and inside the TI, and how the surface electrons interact with those inside the material.

Last year, Gedik, Wang and others published a paper describing a new technique that allowed them to create instantaneous three-dimensional still images of the energy, momentum and spin of electrons within topological insulators. Until then, the only way to create such 3-D images was through a slow and painstaking technique that could reveal one point at a time on the surface. The material would then be rotated slightly so that an image of the next point could be taken, and so on, gradually building up the full image.


This animated sequence shows the way electrons in a topological insulator — a material that resists electricity in its interior, but lets electrons travel virtually without resistance on its surface. In response to a pulse of energy from a laser beam, the electrons become highly excited, then gradually return to their rest state.
Video courtesy of Yihua Wang and Nuh Gedik
The new technique, which enables moving 3-D images, is an application of a method called the pump-probe technique. It uses a short pulse of laser light to energize the material, causing electrons to scatter, and a second, slightly delayed pulse to illuminate it and produce an image. “The first pulse does something to the electrons, and the second pulse captures what happened,” Gedik explains.

Then, the process is repeated, with the second laser pulse delayed by ever-increasing increments of just a few femtoseconds. Each resulting image shows the response of the electrons to the beam after a corresponding interval. These images can then be assembled into a movie that shows how the response changes with time.

Gedik explains that the fastest imaging systems now available can produce exposures lasting hundreds of picoseconds (trillionths of a second), but the electron motions they were trying to observe happen so fast that “in about five picoseconds, everything is done already.”

By using the new technique, the researchers have already discovered interactions between a TI’s surface and bulk electrons that had never been seen before, demonstrating the power of their method to reveal new details of how TIs work. “With this 3-D movie, in real time we can visualize how one population of electrons [those on the surface] scatters into the other population [inside the material],” Gedik says. “This is very important to understand.”

What Gedik and his colleagues found was that the interaction between the two is mediated by sound waves, and that this interaction happens much more intensely at high temperatures. “We can detect that the way they are exchanging energy is through sound waves,” he says.

Kathryn Moler, an associate professor of physics and applied physics at Stanford University who was not involved in this work, says, “Wang, Gedik, and their co-authors have done a beautiful job of separating the electrons that live at the surface from the electrons that live in the bulk, and have furthermore shown that scattering from the surface into the bulk is completely suppressed at low temperatures.” She adds, “These results thus show a dramatic effect of the topological nature of the surface state, and it is made possible because of the authors’ beautiful experimental work both on taking the very fast time-resolved data and on analyzing it.”

Hundreds of potential applications for TI materials have already been proposed, Gedik says, including new kinds of magnetic storage devices to replace today’s hard disks. The proposals are based on the behavior of the surface electrons, but those within the material are always present as well, he says, “so you really need to understand how they interact. This will guide the future work.”

The research was supported by the U.S. Department of Energy’s Office of Basic Energy Sciences, the Army Research Office and the National Science Foundation.