Caption:
A sample of bismuth selenide, a topological insulator, is seen inside the test apparatus in Nuh Gedik&#39;s lab, ready to be studied using the team&#39;s femtosecond laser system and electron spectrometer.
Credits:
Photo: Bryce Vickmark

Researchers at MIT have succeeded in producing and measuring a coupling of photons and electrons on the surface of an unusual type of material called a topological insulator. This type of coupling had been predicted by theorists, but never observed.

The researchers suggest that this finding could lead to the creation of materials whose electronic properties could be “tuned” in real time simply by shining precise laser beams at them. The work “opens up a new avenue for optical manipulation of quantum states of matter,” says Nuh Gedik, the Lawrence C. (1944) and Sarah W. Biedenharn Associate Professor of Physics and senior author of a paper published this week in Science.

Gedik, postdoc Yihua Wang (now at Stanford University), and two other MIT researchers carried out the experiments using a technique Gedik’s lab has been developing for several years. Their method involves shooting femtosecond (millionths of a billionth of a second) pulses of mid-infrared light at a sample of material and observing the results with an electron spectrometer, a specialized high-speed camera the team developed.

They demonstrated the existence of a quantum-mechanical mixture of electrons and photons, known as a Floquet-Bloch state, in a crystalline solid. As first theorized by Swiss physicist Felix Bloch, electrons move in a crystal in a regular, repeating pattern dictated by the periodic structure of the crystal lattice. Photons are electromagnetic waves that have a distinct, regular frequency; their interaction with matter leads to Floquet states, named after the French mathematician Gaston Floquet. “Entangling” electrons with photons in a coherent manner generates the Floquet-Bloch state, which is periodic both in time and space.

Victor Galitski, a professor of physics at the University of Maryland who was not involved in this research, says, “The importance of this work is difficult to overestimate.” He says it “opens new avenues not only for optical control of topological states, but also more generally for engineering of new kinds of electronic states in solid-state systems.”

The researchers mixed the photons from an intense laser pulse with the exotic surface electrons on a topological insulator. Their high-speed camera captured snapshots of the exotic state, from its generation to its rapid disappearance, a process lasting only a few hundred femtoseconds. They also found there were different kinds of mixed states when the polarization of the photons changed.

Their findings suggest that it’s possible to alter the electronic properties of a material — for example, changing it from a conductor to a semiconductor — just by changing the laser beam’s polarization. Normally, to produce such dramatic changes in a material’s properties, “you have to do something violent to it,” Gedik says. “But in this case, it may be possible to do this just by shining light on it. That actually modifies how electrons move in this system. And when we do this, the light does not even get absorbed.” 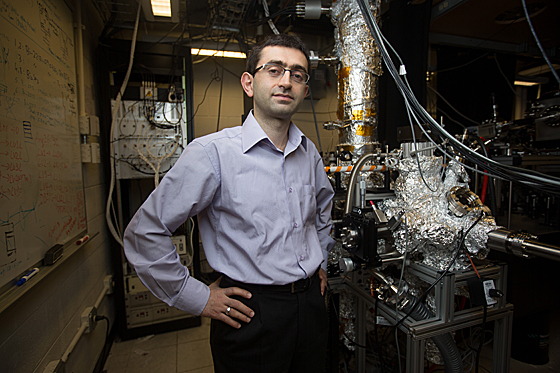 In other situations, light can modify a material’s behavior — but only when it’s absorbed, transferring its energy to the material. In this experiment, Gedik says, the light’s energy is below the absorption threshold. This is exciting, he says, because it opens up the possibility of switching a material’s behavior back and forth without inducing other effects, such as heating — which would happen if the light were absorbed.

It will take some time to assess possible applications, Gedik says. But, he suggests, this could be a way of engineering materials for specific functions. “Suppose you want a material to do something — to conduct electricity, or to be transparent, for example. We usually do this by chemical means. With this new method, it may be possible to do this by simply shining light on the materials.”

For example, a property called a bandgap — a crucial characteristic for materials used in computer chips and solar cells — can be altered by shining a polarized laser beam at the material, Wang says. “You can directly change it, open the bandgap, just with light. It means you can change it from a metal to a semiconductor, for example,” he says.

“In solid-state physics, we often have no other choice but to rely on serendipity when looking for interesting materials,” Galitski says. The new MIT findings “partially challenge this fundamental paradigm by experimentally demonstrating that one can control at will the band structure of a material by subjecting it to an intense optical pulse.”

In addition to Gedik and Wang, the team included Pablo Jarillo-Herrero, the Mitsui Career Development Associate Professor in Contemporary Technology, and visiting scientist Hadar Steinberg, both of MIT’s physics department. The work was supported by the U.S. Department of Energy and the Army Research Office, and made use of shared facilities at the MIT Center for Materials Science.