3 Questions: Jonathan Gruber on the cost of smoking 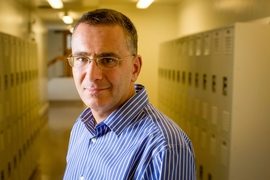 Earlier this year, the U.S. Food and Drug Administration (FDA) proposed new regulations for e-cigarettes, and in so doing developed a much-debated cost-benefit analysis of smoking — one that discounts the benefits of quitting smoking by 70 percent due to the loss of pleasure involved. MIT’s Jonathan Gruber, a high-profile health care economist, is among the skeptics of the new calculation: He has conducted research on smokers and is co-author of a new piece in the Annals of Internal Medicine, published this week, suggesting that the “lost pleasure” is smaller than the government is currently estimating. Gruber, the Ford Professor of Economics, discussed the issue with MIT News recently.

Q. Cigarette labeling and smoking have been the subject of political debate for decades. What is new and surprising in these debates that have sprung up in 2014?

A. The major issue at stake is the reach of the FDA in regulating self-damaging activities such as smoking. This is an important and controversial area. The FDA has, for the first time, included in its cost-benefit analysis of regulations the “lost pleasure” of those who stop smoking due to regulation. I think that this is inappropriate and a misreading of the evidence on how smoking decisions are made.

Q. You have studied topics such as the adoption of smoking by teenagers and the question of whether or not consumers understand the risks associated with smoking, among other things. What is some of the most relevant evidence that should inform the discussion?

A. I think there are two clear conclusions from past research in this area. First, those who initiate in their teenage years — as more than 75 percent of smokers do — do not understand the addictive nature of smoking. One study asked high school seniors smoking one pack or more per day whether they would be smoking in five years. Among those who said that they would be smoking, 72 percent were smoking; among those who said they would not, it was 74 percent.

Second, smokers generally have a “self control” problem: They would like to quit, but cannot do so. Data from a 2002 survey show that more than 9 out of 10 smokers agreed or strongly agreed with the statement, “If you had to do it over again, you would not have started smoking.” Further, 7 out of every 10 smokers reported that they wanted to quit smoking, and more than half of all smokers stopped smoking for at least one day with the intent of quitting permanently. Yet only 2.7 percent of smokers quit each year. My own research finds that the self-reported happiness of potential smokers rises when cigarette taxes are increased.

Q. How should policymakers best interpret such facts, and assess the costs and benefits of smoking?

A. Given this evidence, policymakers should not be applying the standard economics model [in which people are presumed to act rationally] to smoking policy, which would imply relatively little merit for features such as warning labels. Rather, it is important to consider alternative models that incorporate the type of evidence cited above. For example, my own research shows that if you treat all smokers as standard, rational, patient, forward-looking consumers, then we should probably tax cigarettes at below $1 per pack. But if you incorporate the self-control problems noted above — not even including the failures of teens to anticipate the future — the appropriate tax rises to $5 to $10 per pack.

The health-insurance markets of the (very near) future