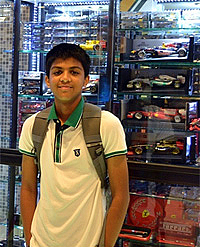 Tuhin Bagi's dream is to attend MIT and work as an automobile engineer. Photo courtesy of Tuhin Bagi
The city of Nasik has long been known as the wine capital of India for its plentiful supply of grapes. But more recently it has become a high-tech and engineering hub — one of the fastest growing cities in the country. Born and raised there, 15-year-old Tuhin Bagi shares his native city’s fascination with science and technology, and maintains an equally breathless pace. He's captain of his school’s badminton team (the reigning champs), plays classical Indian music, frequently competes in regional science fairs, and follows a full curriculum of advanced courses in physics, chemistry and biology.

His parents are strong supporters of Tuhin's academic interests, but found themselves challenged by his curiosity. "Tuhin is an eager learner," explains his father, an industrial automation engineer, "and his interests took him far beyond his school syllabus. I tried to answer his questions and have regular sessions with him, but I could not always be home." One day, while looking for online resources to help Tuhin answer a question in physics, his mother came across MIT OpenCourseWare. At first she worried that its material might be too advanced for a high school freshman, and wrote to OCW for advice. To her surprise, she received a personal response from MIT professor Walter Lewin, who suggested that Tuhin give his lectures a try.

Tuhin loved the lectures immediately, and every day after school his mother would find him watching them on the computer (both 8.01 Physics I: Classical Mechanics and 8.02SC Physics II: Electricity and Magnetism). He sometimes needed to watch a single lecture several times to really capture everything, but acknowledges that it's a big achievement for someone his age to follow a university-level science course. "It is a bit unusual," he admits with a smile. "I don't know anyone else at my school who is doing this."

Since then, it's been a steady progression of additional OCW courses for Tuhin, including Professor Donald Sadoway's Introduction to Solid State Chemistry (3.091SC) and Single Variable Calculus (18.01SC). Explaining Tuhin's attraction to OCW, his father notes that he appreciates how the lectures offer clear and practical illustrations to demonstrate how various theories actually work. But Tuhin views it in simpler terms: "I just feel at home learning," he says.

On close examination, it’s clear that OCW serves Tuhin in two ways. He sees it as a tool for improving his grasp of key concepts in his current studies. "In school there are times when I don't completely understand a topic that my teacher is lecturing. After I go to OCW, I understand it properly." At the same time, he sees OCW as a means to help him realize his future ambitions. "I want to pursue my future studies in the U.S. and OCW helps prepare me. My dream is to go to MIT and become an automobile engineer. The fossil fuels are depleting and new fuels have to be developed—I would like to design new engines to do that."

Tuhin's parents are thrilled at how much OCW has helped him in school, and the drive and confidence it’s inspired in him. "It has certainly expanded his horizons," says his father proudly, while his mother is even more enthusiastic: "My son's life has totally changed since he is using OCW, and being his mother, I am totally satisfied that I am giving him what is required. OCW is fantastic."