Students have engineering on the brain 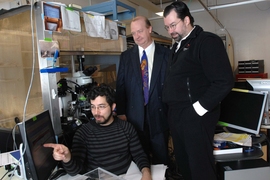 Neurotechnology may sound dauntingly complex, but in practice it can include ideas as straightforward as recognizing computer users by the exact way they press buttons.

One such prototype, developed at MIT, works by sensing subtle differences in the timing and pressure applied by a user in pressing a particular sequence on a touchscreen divided into four colored squares. In a recent demonstration of the system, graduate student Ralph Rodriguez activated a tablet device by tapping the colored squares in the right sequence. He then relocked the device, revealed the correct color sequence, and passed it around the room. Even knowing the right code, none of the 20 people could get the device to unlock.

The idea behind the system is to protect sensitive user data, such as passwords and financial information stored on a mobile device, in case the device is stolen. Rodriguez already has three patents pending on the system, and has started a company to develop it.

This new approach to user authentication was just one of several concepts for neurotech-based businesses that emerged from the latest version of an MIT course called “Neurotechnology Ventures,” which has been taught every year since 2007. The class, co-taught by MIT Media Lab associate professor Ed Boyden and lecturer Joost Bonsen, encourages students to develop businesses based on concepts derived from the study of the brain, psychology, artificial intelligence, neurobiology or related fields.

Many of the ventures exist at the cutting edge of neuroscience research. For inspiration, Boyden described a project in which robots were developed for mapping neural activity in the brain, using an automated system of probes inserted into brain tissue. When the student who developed it, a visiting PhD student from Georgia Tech, presented the invention at a conference, “people immediately started asking for one,” Boyden says.

A wide variety of business concepts emerge from the class. Recent examples include a system for measuring the emotional state of visitors to a website; an automated system for recording the precise location of a probe’s insertion into the brain, so as to map that spot for follow-up treatment or evaluation; and a simple, eyeglasses-mounted diagnostic device that can characterize vestibular disorders, epilepsy and concussions.

One recent class project has now become a startup called Daily Feats, which produces an app to help people set incremental goals for everything from losing weight to being better parents. Users receive reminders on their cellphones to help them meet those goals.

The roots of this course are in discussions Boyden and Bonsen had 15 years ago as MIT students, along with Rutledge Ellis-Behnke, now a research affiliate in the Department of Brain and Cognitive Sciences. “We were thinking how technology was going to have a lot of impact, and could play an eventual role in helping treat these brain disorders,” Boyden says. Broadly defined, brain-related disorders — everything from sleep disorders to depression to addiction — affect at least a billion people worldwide, he says.

Yet, Boyden says, most treatments for such disorders “have been found by serendipity,” and in the late 1990s there was little systematic research aimed at finding solutions to these problems. While almost every field of science has an associated field of engineering research, Bonsen says, this was not true of brain and cognitive science in its infancy. MIT was a pioneer in neurotechnology, establishing the McGovern Institute Neurotechnology (MINT) program in 2006.

“Neurotechnology Ventures” was first offered in the spring of 2007; Boyden, Bonsen and Ellis-Behnke initially co-taught the class. Then as now, speakers came to discuss their own efforts — in neurodiagnostics, neurotherapeutics, and analytical and research-based concepts — to develop new technologies and bring them to market. “It’s really a broad swath of technology,” Bonsen says.

Already, some of the projects spawned in the class have gone on to win prizes in contests such as MIT’s 100K Entrepreneurship Competition; several are now in the process of commercialization.

“There’s not a lot of precedent for neurotechnology entrepreneurship,” Boyden says. “That’s part of the fun, because there isn’t a cookbook to follow. The students have to experience the joys and perils of being pioneers. I learn a lot by helping students struggle with truly difficult problems.”

Boyden and Bonsen say they believe that neurotechnology is poised to take off, much as biotechnology was two decades ago. “We haven’t yet seen the founding of the Biogen or Genzyme of the neurotech field,” Bonsen says. “But I fully suspect that analogs to those companies are being born or blossoming now.”

And to help bring that about, Boyden adds, “If our class can help get a few neurotechnology companies going that seed the Silicon Valley of neurotech, that would be very exciting.”