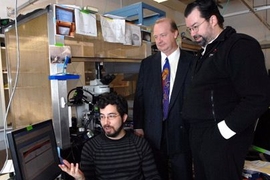 Caption:
Ed Boyden, seated, Rutledge Ellis-Behnke, middle, and Joost Bonsen, met in Boyden's lab to discuss the class they teach together on neurotechnology as a discipline.
Credits:
Photo / Donna Coveney

Neurotechnology, a rapidly growing field that draws upon biology, medical imaging, computer science and other areas of research, is providing a fertile ground for both existing businesses and startups. With the aim of grooming the sector's future leaders, MIT has created a new research program and is offering numerous classes — including one on how to launch businesses in the industry.

The multidisciplinary, interdepartmental work in neurotechnology now being done across MIT has been spurred on in part by the creation in 2006 of the McGovern Institute Neurotechnology (MINT) program. That program, says its director Charles Jennings, was created to take advantage of the fact that "MIT is almost in a uniquely good position to develop new technologies" in this field, thanks to its confluence of expertise in neurosciences, engineering and computation. "We have an extraordinary set of advantages."

Neurotechnology is an umbrella term used to describe a wide range of technologies: diagnostic imaging of the brain through methods such as functional Magnetic Resonance Imaging (fMRI); neuropharmacology (drugs, including painkillers and antidepressants, that affect brain and nervous system functioning); enhancements or replacements for sensory or motor systems (cochlear or retinal implants, "smart" prosthetics) and neurostimulation through implanted electrodes to treat diseases such as Parkinson's or to restore mobility to paralyzed patients.

Because of its inherently cross-disciplinary nature, MIT's work in neurotechnology spans many labs and departments. The Harvard-MIT Division of Health Science & Technology helped to incubate the field of neuroengineering for years (and one of its alums, Shai Gozani, was the founder of NeuroMetrix, a leading company in the field). Other important related work has come from the Department of Brain and Cognitive Sciences, the Research Lab for Electronics, the Department of Electrical Engineering and Computer Science, the Computer Science and Artificial Intelligence Laboratory, and the Media Lab, which hired neuroengineer Ed Boyden as a faculty member.

The new classes helping to put MIT at the forefront of this field include "Principles of Neuroengineering," "Applications of Neuroengineering," and "Neurotechnology Ventures," which were spawned by student-led seminars on the subject that were taught in the late 1990s. The series of three courses was supported by the largest-ever grant in the history of MIT alumni class funds.

In "Neurotechnology Ventures," which was taught in the Spring 2007 and Fall 2008 semesters, representatives of a variety of neurotech companies presented stories of how their technical innovations came about and were developed (or are now developing) into functioning businesses. Then, students formed teams to produce business plans for new neurotech ventures of their own.

The neurotech industry is already substantial and growing rapidly, accounting for more than $130 billion in revenues in 2007, according to a November report in the journal Nature that cited the MIT class. In the same year, the report said, venture capitalists invested more than $1.7 billion in new businesses in the sector. In this climate, which has been compared to the biotechnology boom of the 1980s, MIT's class seeks to give its students guidance in how to turn their new ideas and insights into profitable companies.

The plans students develop in the class are ready to be presented in competitions such as MIT's $100K business plan contest, says Ed Boyden ’99, the Benesse Career Development Assistant Professor of Biomedical Engineering at the Media Lab, who co-teaches the course with Media Lab researcher Joost Bonsen ’90, SM ’06 and Rutledge Ellis-Behnke PhD ’03, a research scientist in BCS. "Several of the students wrote up $100K pitches," Boyden says, "and some are looking now at getting funding" for the launch of their proposed businesses.

The guest speakers in each class described the details of their ventures to offer students a clear sense of the nitty-gritty of turning ideas into practice. "They shared both the core concept, and what it was like to execute the plan," says Bonsen. "The false starts, what to watch out for, how to deal with the venture capitalists — practical, useful advice."

Because neurotechnology is a hot topic around the world, the class was structured as a globe-spanning collaboration. Each class was co-taught via teleconferencing with the University of Hong Kong, where Ellis-Behnke is based, and China Medical University Hospital in Taiwan, and the hope is that it will grow to other locations. "It has now started to spread to places where we have no formal ties," Boyden says. "We want students to think globally about this field."

By taking part in this class and developing their own ideas, the students are "helping to define a nascent field," Boyden says. If a dozen or so students develop new plans each time the class is given, "after a decade, these could be the people shaping the field."

Helping students get a business started is just the short-term goal, however, and the three instructors are hoping for more. "Three or four of the ventures are going to have a real chance of impacting the world," Boyden says. And that's one of the reasons he chose to come to MIT in the first place, and to teach this class here: "I wanted to be in a place where moving technologies from the lab out into the world is not only tolerated, but celebrated," he says.

Thanks to that approach, MIT may be well positioned to nurture the future leaders of this field. "The therapeutic market for brain disorders is enormous," says the McGovern Institute's Jennings, "I hope we'll be a significant center for innovation and the development of new technologies. Where better than MIT to come up with the next generation of systems?"