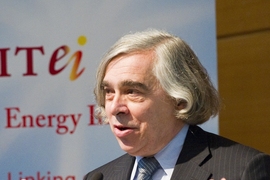 Moniz is the Cecil and Ida Green Professor of Physics and Engineering Systems, as well as the director of the MIT Energy Initiative (MITEI) and the Laboratory for Energy and the Environment. At MIT, Moniz has also served previously as head of the Department of Physics and as director of the Bates Linear Accelerator Center. His principal research contributions have been in theoretical nuclear physics and in energy technology and policy studies. He has been on the MIT faculty since 1973.

“President Obama has made an excellent choice in his selection of Professor Moniz as Energy Secretary,” said MIT President L. Rafael Reif. “His leadership of MITEI has been in the best tradition of the Institute — MIT students and faculty focusing their expertise and creativity on solving major societal challenges, a history of working with industry on high-impact solutions, and a culture of interdisciplinary research.” Reif continued, “We have been fortunate that Professor Moniz has put his enthusiasm, deep understanding of energy, and commitment to a clean energy future to work for MIT and the Energy Initiative — and we are certain he will do the same for the American people.”

Moniz is the founding director of MITEI, which was created in 2006 by then–MIT President Susan Hockfield. MITEI is designed to link science, innovation and policy to help transform global energy systems. Under Moniz’s stewardship, MITEI has supported almost 800 research projects at the Institute, has 23 industry and public partners supporting research and analysis, and has engaged 25 percent of the MIT faculty in its projects and programs.

At last count, more than two-thirds of the research projects supported through MITEI have been in renewable energy, energy efficiency, carbon management, and enabling tools such as biotechnology, nanotechnology and advanced modeling. The largest single area of funded research is in solar energy, with more than 100 research projects in this area alone.

Projects supported through MITEI have fostered the development of such innovative technologies as low-cost solar cells that can be printed directly onto paper or other flexible, inexpensive materials; utility-scale liquid batteries that could enable grid integration of intermittent energy sources; transparent solar cells that could be built into display screens or windows; and bioengineered batteries. More than 100 MITEI seed fund projects have served to attract many MIT faculty to energy-related research. Several MITEI-supported projects have led to the formation of startup companies, reflecting the Institute’s long-standing focus on commercializing technology solutions.

In addition, MITEI has a major focus on education. It has awarded 252 graduate fellowships in energy, 104 undergraduate research opportunities and, in 2009, established a new energy minor, which is already one of the largest at the Institute. MITEI also supports a range of student-led research projects to green the MIT campus.

MITEI has furthered a series of influential in-depth studies that provide technically grounded analyses to energy leaders and policymakers; major studies have included the Future of Nuclear Power and of Nuclear Fuel Cycles, Future of Coal, Future of the Electric Grid, and the Future of Natural Gas. MITEI is currently well along on a comprehensive study on the future of solar energy.

"Professor Moniz is well prepared to take on this critically important role,” said Susan Hockfield. “When I called for the establishment of MITEI, I knew that it would require superb leadership. Professor Moniz has provided it, and he has shown a remarkable ability to discern how best to bring groundbreaking research to bear on both immediate and longer-term energy problems. He has brought together industry, government and the academy to address the global challenge of sustainable energy.”

Moniz served as undersecretary of energy from 1997 to 2001. In that role, he had oversight responsibility for all of DOE’s science and energy programs and the DOE national laboratory system. He also led a comprehensive review of the nuclear weapons stockpile stewardship program, advanced the science and technology of environmental cleanup, and served as DOE’s special negotiator for Russia initiatives, with a particular focus on the disposal of Russian nuclear materials.

From 1995 to 1997, he served as the associate director for science in the White House Office of Science and Technology Policy. There, his responsibilities spanned the physical, life, and social and behavioral sciences; science education; and university-government partnerships.

He currently serves on the President’s Council of Advisors for Science and Technology and on the Department of Defense Threat Reduction Advisory Committee. He recently served on the Blue Ribbon Commission on America’s Nuclear Future.

Moniz is a fellow of the American Association for the Advancement of Science, the Humboldt Foundation, and the American Physical Society, and a member of the Council on Foreign Relations. He received the 1998 Seymour Cray HPCC Industry Recognition Award for vision and leadership in advancing scientific simulation and, in 2008, the Grand Cross of the Order of Makarios III for contributions to development of research, technology and education in Cyprus and the wider region.

DOE’s mission is to ensure America’s security and prosperity by addressing its energy, environmental and nuclear challenges through science and technology. The agency had a budget of more than $29 billion in fiscal year 2012; runs 17 national laboratories, and many other research facilities; and has more than 16,000 federal employees and 90,000 contract employees at the national laboratories and other facilities. DOE is the largest funder of research in the physical sciences.

Fred Thys reports for WBUR that the MIT connection shared by U.S. Energy Secretary Ernest Moniz and Ali Akbar Salehi, head of Iran’s Atomic Energy Organization, likely had a positive impact on the nuclear negotiations. “Salehi and Moniz likely bonded over their shared connection to MIT — and ultimately, the pair were able to help forge a historic deal,” Thys explains.

Boston Globe Magazine reporter Neil Swidey profiles Prof. Emeritus Ernest Moniz, the Secretary of Energy, chronicling his childhood in Fall River, his time at MIT, and his current role in the Iran nuclear deal. “He’s one of the best prepared energy secretaries we’ve ever had,” says Bill Richardson, a former US energy secretary.

AP reporter Josh Lederman highlights the role Prof. Emeritus Ernest Moniz, the U.S. Secretary of Energy, played in negotiating the Iran nuclear deal. Lederman writes that by all accounts Moniz played a “pivotal role in reaching the historic nuclear accord.”

Prof. Emeritus Ernest Moniz, the U.S. Energy Secretary, speaks with Marco Werman of PRI about his work on the Iran nuclear deal. Moniz explains that he and his Iranian counterpart in negotiations, an MIT alumnus, applied “the MIT problem solving approach…to march through quite a few issues.”

Professor Ernest Moniz, the U.S. Secretary of Energy, participates on NPR’s quiz show Wait Wait…Don’t Tell Me!. “A number of young scientists around the country considered the pathway I've taken one that inspires them. And it's really a pleasure to be able to hopefully encourage these young students,” says Moniz.