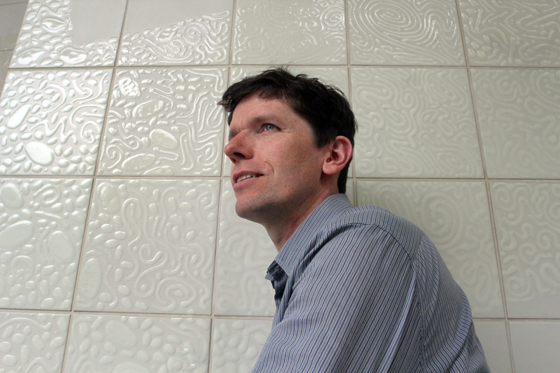 One of the most important structures in a cell is the nuclear pore complex — a tiny yet complicated channel through which information flows in and out of the cell’s nucleus, directing all other cell activity.

Little is known about this vital cell structure, but MIT biologist Thomas Schwartz is trying to change that. Using X-ray crystallography, he is steadily assembling a thorough portrait of the 500 proteins that make up nuclear pores, and how they come together to perform their crucial role.

A cell’s nucleus is where all of its genetic material is stored in the form of DNA. Those genetic instructions are copied into messenger RNA, strands of which have to exit the nucleus so they can direct the cell’s protein synthesis. Proteins and other signaling molecules also pass through the nuclear pores. However, many questions remain unanswered about how the pores are assembled, and how they control so much activity.

Painstakingly piecing together the intricate interactions of the 500 proteins in the nuclear pore complex is a task well suited to the analytical Schwartz. Born in Stuttgart, Germany, Schwartz grew up surrounded by “people who think analytically,” he recalls. Stuttgart is home to many of Germany’s automobile manufacturers, and Schwartz’s father was an automotive engineer at Bosch, a company that makes fuel injection pumps. His mother also worked at Bosch; his brother grew up to become a software engineer.

“I was the odd one because I went into biology and chemistry. I was not really that much into physics. I liked chemical explosions when I was a kid,” says Schwartz, who earned tenure at MIT last June.

He studied biochemistry at Berlin’s Freie University, arriving on the day of German reunification in October 1990. After earning his bachelor’s degree, he continued at Freie for his PhD but spent three years as a visiting student at MIT, in the lab of legendary structural biologist Alexander Rich.

Working with Rich, who is best known for discovering the structures of left-handed DNA and transfer RNA, was “inspirational,” Schwartz says. “Freie University was a big university with lots of students and there wasn’t this personal touch that is so normal at MIT. Here, somebody will really care about what you are doing.”

In Rich’s lab, Schwartz used X-ray crystallography to figure out the structure of a protein that binds to left-handed DNA. X-ray crystallography — a way to image molecules by bombarding them with X-rays — appealed to him more than other scientific techniques, because “it’s a direct visual readout of a molecule’s function,” he says. That makes it easier to get a clear answer, instead of relying on data open to multiple interpretations.

After earning his PhD, Schwartz went back to Berlin for a year as a postdoc. However, he found that he missed the atmosphere at MIT. “People here essentially live science, so if that’s attractive to you, it’s hard to go anywhere else,” he says.

Schwartz decided to leave Berlin and did four years of postdoctoral work at Rockefeller University, where he continued his research in X-ray crystallography. Working with Günter Blobel, he became interested in the nuclear pore complex.

There are 30 different types of proteins found in each pore; each pore contains a total of about 500 protein molecules. “When you look at it from a structural perspective, it’s one of the most fascinating and largest assemblies that we know of in the cell,” Schwartz says.

At MIT, Schwartz and members of his lab are piecing together the structure of the pore by crystallizing a few of the proteins at a time, then combining the structures of overlapping sections.

Learning more about how nuclear pores work could help researchers come up with new ways to block retroviruses, such as HIV, that enter the cell’s nucleus and take over its genetic machinery.

“Any retrovirus needs to go through the pore,” Schwartz says. “If you really understood all the molecular interactions that happen there, you would have a totally new avenue for generating drugs. There’s not a single drug at this point that targets this process.”