Moving past trial and error 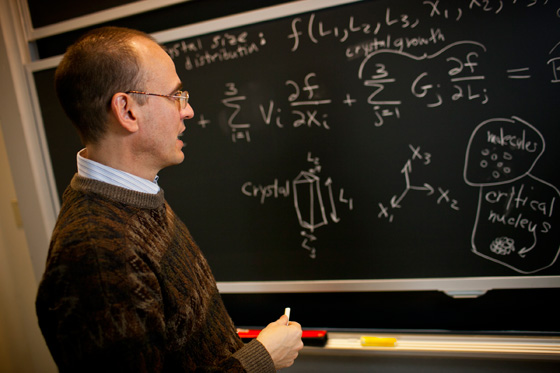 Trial-and-error experimentation underlies many biomedical innovations. This classic method — define a problem, test a proposed solution, learn from failure and try again — is the main route by which scientists discover new biomaterials and drugs today. This approach is also used to design ways of manufacturing these new materials, but the process is immensely time-consuming, producing a successful therapeutic product and its manufacturing process only after years of experiments, at considerable expense.

Richard Braatz, the Edwin R. Gilliland Professor of Chemical Engineering at MIT, applies mathematics to streamline the development of pharmaceuticals. Trained as an applied mathematician, Braatz is developing mathematical models to help scientists quickly and accurately design processes for manufacturing drug compounds with desired characteristics. Through mathematical simulations, Braatz has designed a system that significantly speeds the design of drug-manufacturing processes; he is now looking to apply the same mathematical approach to designing new biomaterials and nanoscale devices.

“Nanotechnology is very heavily experimental,” Braatz says. “There are researchers who do computations to gain insights into the physics or chemistry of nanoscale systems, but do not apply these computations for their design or manufacture. I want to push systematic design methods to the nanoscale, and to other areas where such methods aren’t really developed yet, such as biomaterials.”

From farm to formulas

Braatz’s own academic path was anything but systematic. He spent most of his childhood on an Oregon farm owned by his grandfather. Braatz says he absorbed an engineer’s way of thinking early on from his father, an electrician, by examining his father’s handiwork on the farm and reading his electrical manuals.

Braatz also developed a serious work ethic. From the age of 10, he awoke early every morning — even on school days — to work on the farm. In high school, he picked up a night job at the local newspaper, processing and delivering thousands of newspapers to stores and the post office, sometimes until just before dawn.

After graduating from high school in 1984, Braatz headed to Alaska for the summer. A neighbor had told him that work paid well up north, and Braatz took a job at a fish-processing facility, driving forklifts and hauling 100-pound bags of fishmeal 16 hours a day. He returned each summer for four years, eventually working his way up to plant operator, saving enough money each summer to pay for the next year’s tuition at Oregon State University.

As an undergraduate, Braatz first planned to major in electrical engineering. But finding the introductory coursework unstimulating — given the knowledge he’d absorbed from his father — he cast about for another major.

“There was no Internet back then, so you couldn’t Google; web searches didn’t exist,” Braatz says. “So I went to the library and opened an encyclopedia, and said, 'OK, what other engineering [is] there?'”

Chemical engineering caught his eye; he had always liked and excelled at chemistry in high school. While pursuing a degree in chemical engineering, Braatz filled the rest of his schedule with courses in mathematics. 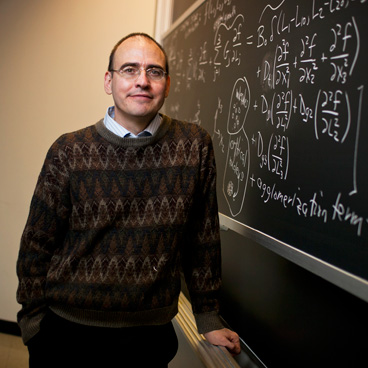 Photo: Dominick Reuter
After graduation, Braatz went on to the California Institute of Technology, where he earned both a master’s and a PhD in chemical engineering. In addition to his research, Braatz took numerous math and math-heavy courses in electrical engineering, applied mechanics, chemical engineering and chemistry. The combination of real applications and mathematical theory revealed a field of study Braatz had not previously considered: applied mathematics.

“This training was a very good background for learning how to derive mathematical solutions to research problems,” Braatz says.

Soon after receiving his PhD, Braatz accepted an assistant professorship at the University of Illinois at Urbana-Champaign (UIUC). There, as an applied mathematician, he worked with researchers to tackle problems in a variety of fields: computer science, materials science, and electrical, chemical and mechanical engineering.

He spent eight years on a project spurred by a talk he attended at UIUC. In that talk, a representative of Merck described a major challenge in the pharmaceutical industry: controlling the size of crystals in the manufacture of any given drug. (The size and consistency of crystals determine, in part, a drug’s properties and overall efficacy.)

Braatz learned that while drug-manufacturing machinery was often monitored by sensors, much of the resulting data went unanalyzed. He pored over the sensors’ data, and developed mathematical models to gain an understanding of what the sensors reveal about each aspect of the drug-crystallization process. Over the years, his team devised an integrated series of algorithms that combined efficiently designed experiments with mathematical models to yield a desired crystal size from a given drug solution. They worked the algorithms into a system that automatically adjusts settings at each phase of the manufacturing process to produce an optimal crystal size, based on a “recipe” given by the algorithms.

“Sometimes the recipes are very weird,” Braatz says. “It might be a strange path you have to follow to manufacture the right crystals.”

The automated system, which has since been adopted by Merck and other pharmaceutical companies, provides a big improvement in efficiency, Braatz says, avoiding the time-consuming trial-and-error approach many drug manufacturers had relied on to design a crystallization process for a new drug.

In 2010, Braatz moved to MIT, where he is exploring mathematical applications in nanotechnology and tissue engineering — in particular, models to help design new drug-releasing materials. Such materials have the potential to deliver controlled, continuous therapies, but designing them currently takes years of trial-and-error experiments.

Braatz’s group is designing mathematical models to give researchers instructions, for example, on how to design materials that locally release drugs into a body’s cells at a desired rate. Braatz says approaching such a problem from a systematic perspective could potentially save years of time in the development of a biomedical material of high efficacy.

“Anything is a win if you could reduce those experiments from 10 years to several years,” Braatz says. “We’re talking hundreds of millions, billions of dollars. And the effect on people’s lives, you can’t put a price tag on that.”