Caption:
Heather Paxson, an associate professor in MIT's Anthropology Program, studies the people and culture behind the renaissance of artisanal cheese making in the United States.
Credits:
Photo: Dominick Reuter

“I thought it was not real food and it was an insult,” she says of her youthful disdain for the processed stuff. As an elementary school student growing up in southern Illinois, Paxson insisted on cheddar or Swiss for her sandwiches instead.

Today, Paxson is a tenured professor in MIT’s Anthropology Program, where she does ethnographic research into artisanal cheese making in the United States. She studies several aspects of cheese production, from the cultural — who is behind the current renaissance in handmade cheeses? — to what she calls the “microbiopolitics” of raw-milk cheese on this side of the Atlantic.

Coincidence? Probably not, but Paxson’s scholarship took her through varied terrain before she circled back to her passion for dairy. “I’m interested in everyday ethics,” she says, an interest that, before her current focus on food and eating, first manifested as the study of a different bodily process: reproduction.

Paxson’s doctoral thesis, done at Stanford University, examined the morals of motherhood in modern-day Greece, taking as its central question the “apparent paradox of a child-loving Mediterranean society in which the abortion rate is twice the national birth rate,” she writes. Her resulting book, Making Modern Mothers: Ethics and Family Planning in Urban Greece (University of California Press, 2004), examined changing attitudes toward fertility control in a nation attempting to reconcile cultural traditions with a struggling economy.

The impetus to conduct her research in Greece — and indeed, to become an academic researcher in the first place — comes largely from her father, Paxson says, who was a professor of philosophy at Southern Illinois University. When Paxson was in first grade, the family moved to Athens, where her father took a sabbatical to further his research into ancient Greek philosophy. Even a relatively brief stint at a young age had an effect on Paxson, now 42, who says, “I was completely fascinated with Greek mythology — I was going to discover the palace of the 12 Olympian gods.”

As an undergraduate arriving at Haverford College, near Philadelphia, Paxson thought she wanted to study classical archaeology. Though she did do some archaeology coursework, she was also drawn to feminist studies, which, she says, “is hard to do” while focusing on the ancient world. Ultimately, she settled on cultural anthropology, focusing on gender and ideology.

Shortly after completing her PhD, while working at New York University and grocery shopping in Manhattan’s Union Square, Paxson found herself wondering about the sudden influx of domestically produced artisanal cheeses cropping up at farmers’ markets and specialty food stores. The year 2000 “coincided more or less with the rise of the farmer’s market movement,” she says, with the “Slow Food” ideology gaining ground. A longtime vegetarian, she says, “I was interested in food politics, and I eat a lot of cheese.”

The back-to-the-land movement of the 1960s and ’70s saw an initial renewal of interest in cheese making, but between 2000 and 2006, Paxson writes, the number of artisan cheese-makers in the United States doubled. “I wanted to know more about cheese as a cultural artifact,” Paxson explains. “Who’s making this cheese? How did they learn? Was it old traditions being revived, or new traditions being created?”

With funding from the Wenner-Gren Foundation for Anthropological Research and MIT’s James A. (1945) and Ruth Levitan Prize in the Humanities, Paxson eventually found that it was a bit of both, as she crisscrossed the country to do research at sites in Vermont, Wisconsin and California. Her travels introduced her to cheesemakers of all kinds: traditional dairy farmers hoping that niche markets for artisan cheese would revitalize their family businesses, former hippies and young college graduates eager to follow sustainable lifestyles, and early retirees from the corporate world looking to launch second careers. 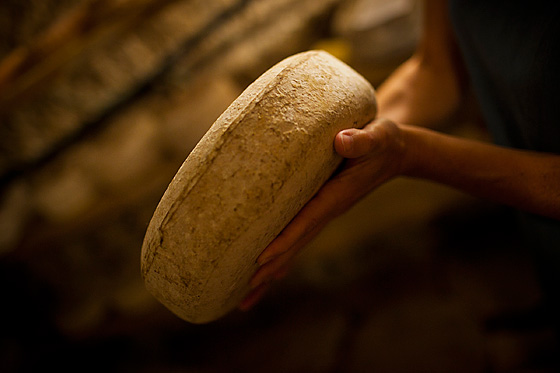 Paxson holds up an example of a washed-rind cheese in Cambridge's Formaggio Kitchen.
Photo: Dominick Reuter

“Cheese turns out to be a good way to focus on artisanship and rural entrepreneurship, what goes into the food we eat, and how people are thinking differently about the value of food,” Paxson says. “Food’s value and the goodness of food is now infused with whether its production is good for other things — for communities, for the environment, for animal welfare.” Following a fellowship at Harvard University’s Radcliffe Institute for Advanced Study, she is currently finishing a book called American Cheese and the Value of Craft.

Rearing the next generation

For all her self-proclaimed food snobbery, Paxson is known to her students as a down-to-earth, friendly professor. At MIT, where she has held the Class of 1957 Career Development Chair, she has won the Everett Moore Baker Memorial Award and the Levitan Award, both given for excellence in teaching. Of working with Institute undergraduates, she says, “We are training scientists and engineers to work in a global world — to be aware of cultural communication concerns and to understand that ‘difference’ is not just a matter of beliefs, but of politics and economics as well.”

When she’s not in class or doing research, Paxson can be found with her 6-year-old son, Rufus. Having studied family planning for her doctorate, Paxson says the issues Athenian women deal with are not all that different from the ones facing their American counterparts.

”A lesson that I really took from Greece was that one child makes a mother,” she says, pointing out that Cambridge, Mass., has the oldest average maternity age in the country. Her personal experience with motherhood has renewed her respect for the ideals of childrearing in modern Greece, where the birth rate is one of the lowest in Europe: “There’s all this talk about children and there’s all this love for children, but the ethic is to raise children well,” she says.
Paxson also enjoys cooking, which she says stems in part from watching her own mother, who was “an excellent cook and baker.” So where is the best place to buy cheese in Boston?