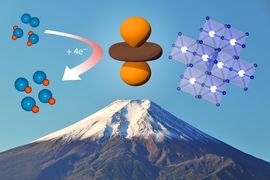 ↓ Download Image
Caption: This diagram illustrates the way the electronic configuration of metal ions can control the activity of metal oxides for oxygen reduction, varying it by a factor of at least 10,000 times. This can serve as a design principle (symbolized as a “volcano plot”) to screen metal oxide candidates and accelerate the development of efficient fuel cells, metal-air batteries and other energy storage technologies.
Credits: Image: Jin Suntivich, Eva Mutoro and Yang Shao-Horn 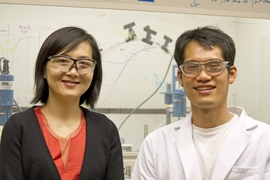 Caption:
This diagram illustrates the way the electronic configuration of metal ions can control the activity of metal oxides for oxygen reduction, varying it by a factor of at least 10,000 times. This can serve as a design principle (symbolized as a “volcano plot”) to screen metal oxide candidates and accelerate the development of efficient fuel cells, metal-air batteries and other energy storage technologies.
Credits:
Image: Jin Suntivich, Eva Mutoro and Yang Shao-Horn

Such catalysts are the crucial materials that govern the performance of fuel cells, as well as air-breathing batteries and other energy storage systems that are becoming increasingly important for everything from portable electronic devices to cars to the electric grid — where inexpensive storage is seen as key to increasing use of renewable but intermittent energy sources, such as solar or wind. But so far, selecting and testing such materials has essentially been a matter of trial and error, and most of the high-performing materials found have been rare and expensive, such as palladium and platinum.

The new principle, by contrast, should allow rapid assessment of a range of alternative catalysts made of metal-oxide materials, many of which are made of inexpensive and abundant elements.

The MIT researchers’ analysis found that the effectiveness of different materials could be determined by the arrangement of electrons in the outer shells of their atoms, and the way surface metal ions bond to oxygen. The research — led by Yang Shao-Horn, an associate professor of mechanical engineering and materials science and engineering at MIT, and Hubert A. Gasteiger, a visiting professor at MIT and a chemistry professor at the Technische Universität München in Garching, Germany — was published June 13 in the journal Nature Chemistry. Graduate student Jin Suntivich of MIT’s Department of Materials Science and Engineering is the lead author, and John B. Goodenough of the University of Texas at Austin is a co-author.

Shao-Horn explains that until now, there has not been any systematic approach to looking for new, inexpensive and high-performance oxides to use as electrodes in fuel cells or metal-air batteries. Typically, good catalysts for oxygen reduction will bind neither too strongly nor too weakly with oxygen. “For some time, we knew that platinum was good” as a catalyst, she says, but it was unclear whether the explanation could be applied to other materials such as metal oxides.

Research pioneered by Jens Nørskov and colleagues at Stanford University and Denmark Technical University established a simple parameter: average energy of the outermost electron, which correlates with the binding energy of oxygen to metal surfaces. This principle explains why certain metals perform better than others, and it turns out that platinum just has the right electronic structure to provide optimum binding of oxygen — and thus high catalytic activity.

Now, “we have a theoretical framework and experimental evidence that explains why” certain metal oxides perform better than others, Shao-Horn says. When plotted on a chart comparing the electronic configuration of oxides’ surface metal ions and their catalytic activity, the result is a “volcano” shape: a sharp peak at the center, with steeply sloping sides indicating poorer performance. By simply changing the electronic configuration, materials can vary in their activity by a factor of at least 10,000 from the base of the volcano to the peak, Shao-Horn says.

The new work now makes it possible to screen thousands of candidate metal-oxide materials without the time-consuming tests needed to prove their exact performance. A material’s behavior can now be predicted from a single parameter: how its electrons are distributed in the orbitals responsible for the bonding of metal to oxygen.

Robert Savinell, the George S. Dively Professor of Chemical Engineering at Case Western Reserve University, says this work is “of very high quality in rigor and innovation.” He adds that it “allows for optimizing chemical compositions for other important catalyst characteristics such as ease of synthesis, durability,” and other qualities. He says the research results will have an impact on searches for catalyst materials “for alkaline fuel cells, metal-air batteries, and even for electrolysis cells [that] … will be important for converting renewable energy sources such as wind and solar to hydrogen for energy storage or for use in fuel cells for transportation.”

The research was sponsored by and done in collaboration with Toyota Motor Company, because of its potential to lead to better materials for electric car batteries. It also received support from the U.S. Department of Energy’s Hydrogen Initiative, the National Science Foundation, the Chesonis Family Foundation, the Robert A. Welch Foundation and the Office of Naval Research.