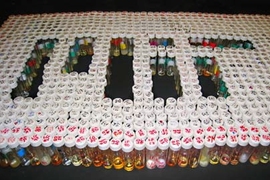 ↓ Download Image
Caption: Vials of lipid-like molecules developed by a team from MIT and Alnylam Pharmaceuticals. Some of the compounds have successfully delivered RNA interference agents in animals.
Credits: Photo / Kevin Love

Caption:
Vials of lipid-like molecules developed by a team from MIT and Alnylam Pharmaceuticals. Some of the compounds have successfully delivered RNA interference agents in animals.
Credits:
Photo / Kevin Love

A team of researchers from MIT and Alnylam Pharmaceuticals has developed safe and effective methods to perform RNA interference, a therapy that holds great promise for treating a variety of diseases including cancer and hepatitis.

"RNA interference is a tool that has a lot of people excited, and one reason for the excitement is that we hope it will provide a new method to control almost any gene in your body," said Daniel Anderson of the David H. Koch Institute for Integrative Cancer Research at MIT and the senior author of a paper on the work appearing as the cover story in Nature Biotechnology today.

Scientists see RNA interference (RNAi) as a way to turn off specific disease-causing genes. Despite this potential, researchers studying the technique have been stymied by one major problem: How to deliver RNAi agents to target tissues.

Now, the MIT/Alnylam team has developed a library of new molecules that successfully delivered RNA interference agents in several animals, including mice, rats and cynomolgus monkeys. The team hopes to test the delivery materials in human clinical trials within the next few years.

RNAi works by disrupting the flow of genetic information from a cell's nucleus to the protein-building machinery of the cell. Gene expression can be turned on or off by interfering with messenger RNA, which carries that information.

One way to deliver RNAi is to package siRNA (short interfering RNA) inside nanoparticles that can deliver it directly to the target cell.

In previous studies, lipids (fat-soluble molecules such as fats, waxes and cholesterol) have shown promise as RNAi delivery agents. However, only a limited number of different materials had been developed when those studies were conducted.

Using a new synthesis scheme that allows for high-speed production, the researchers created a huge library of lipid-like molecules called lipidoids. A major advantage of these chemical methods is that they facilitate production of a large variety of different molecules, which could be customized for different RNAi therapies and drug-delivery problems.

The MIT team found several lipidoids that successfully delivered siRNA to the liver, which may provide a therapy for diseases ranging from cancer to viral infection, Anderson said. They also demonstrated siRNA delivery to the lungs, where it blocked genes expressed by respiratory syncytial virus that had infected the lungs. The lipidoids were also able to deliver siRNA to immune cells called macrophages.

In some cases, the effects of a single RNAi injection lasted up to four weeks. The researchers also showed that they could block two genes at once, raising the possibility of treating diseases that involve multiple genes.

"For the first time, we've got a lot of formulations to choose from," Anderson said. "In the next five years, we expect to push this technology forward in a number of different clinical and drug-delivery applications."

The first author of the paper is Akin Akinc, who received a PhD in chemical engineering from MIT in 2003 and is now at Alnylam. Andreas Zumbuehl, now at the University of Geneva; MIT students Michael Goldberg, Elizaveta Leshchiner, Valentina Busini, Sergio Bacallado, David Nguyen and Jason Fuller; and Institute Professor Robert Langer are also authors of the paper.