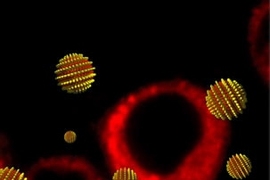 Caption:
MIT researchers have created 'striped' nanoparticles capable of entering a cell without rupturing it. In the background of thisÂ cartoon are cells that have taken up nanoparticles carrying fluorescent imaging agents
Credits:
Image courtesy / Francesco Stellacci, Darrell Irvine and colleagues, MIT

In work that could at the same time impact the delivery of drugs and explain a biological mystery, MIT engineers have created the first synthetic nanoparticles that can penetrate a cell without poking a hole in its protective membrane and killing it.

The key to their approach? Stripes.

The team found that gold nanoparticles coated with alternating bands of two different kinds of molecules can quickly pass into cells without harming them, while those randomly coated with the same materials cannot. The research was reported in a recent advance online publication of Nature Materials.

"We've created the first fully synthetic material that can pass through a cell membrane without rupturing it, and we've found that order on the nanometer scale is necessary to provide this property," said Francesco Stellacci, an associate professor in the Department of Materials Science and Engineering and co-leader of the work with Darrell Irvine, the Eugene Bell Career Development Associate Professor of Tissue Engineering.

In addition to the practical applications of such nanoparticles for drug delivery and more--the MIT team used them to deliver fluorescent imaging agents to cells--the tiny spheres could help explain how some biological materials such as peptides are able to enter cells.

"No one understands how these biologically derived cell-penetrating materials work," said Irvine. "So we could use the new particles to learn more about their biological counterparts. Could they be analogues of the biological system?"

When a cell membrane recognizes a foreign object such as a nanoparticle, it normally wraps around or "eats" it, encasing the object in a smaller bubble inside the cell that can eventually be excreted. Any drugs or other agents attached to the nanoparticle therefore never reach the main fluid section of the cell, or cytosol, where they could have an effect.

Such nanoparticles can also be "chaperoned" by biological molecules into the cytosol, but this too has drawbacks. Chaperones can work in some cells but not others, and carry one cargo but not another.

Hence the importance of the MIT work in developing nanoparticles that can directly penetrate the cell membrane, deliver their cargo to the cytosol, and do so without killing the cell.

Irvine compares the feat to a phenomenon kids can discover. "If you have a soap film and you poke it with a bubble wand, you'll pop it," he said. "But if you coat the bubble wand with soap before poking the film, it will pass through the film without popping it because it's coated with the same material." Stellacci notes that the coated nanoparticles have properties similar to the cell membrane--not identical--but the analogy is still apt.

Stellacci first reported the creation of the striped nanoparticles in a 2004 Nature Materials paper. At the time, "we noticed that they interacted with proteins in an interesting way," he said. "Could they also have interesting interactions with cells?" Four years later, he and his colleagues report a resounding "yes."

Irvine has appointments in the Department of Biological Engineering and MSE, and is a member of the David H. Koch Institute for Integrative Cancer Research at MIT. He was recently named a Howard Hughes Medical Institute investigator.

The research was funded in part by the NSF, the NIH and the Packard Foundation.