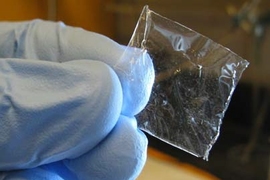 MIT engineers have improved the power output of one type of fuel cell by more than 50 percent through technology that could help these environmentally friendly energy storage devices find a much broader market, particularly in portable electronics.

The new material key to the work is also considerably less expensive than its conventional industrial counterpart, among other advantages.

"Our goal is to replace traditional fuel-cell membranes with these cost-effective, highly tunable and better-performing materials," said Paula T. Hammond, Bayer Professor of Chemical Engineering and leader of the research team. She noted that the new material also has potential for use in other electrochemical systems such as batteries.

The work was reported in a recent issue of Advanced Materials by Hammond, Avni A. Argun and J. Nathan Ashcraft. Argun is a postdoctoral associate in chemical engineering; Ashcraft is a graduate student in the same department.

Like a battery, a fuel cell has three principal parts: two electrodes (a cathode and anode) separated by an electrolyte. Chemical reactions at the electrodes produce an electronic current that can be made to flow through an appliance connected to the battery or fuel cell. The principal difference between the two? Fuel cells get their energy from an external source of hydrogen fuel, while conventional batteries draw from a finite source in a contained system.

The MIT team focused on direct methanol fuel cells (DMFCs), in which theÂ methanol is directly used as the fuel andÂ reforming of alcohol down to hydrogen is not required. Such a fuel cell is attractive because the only waste products are water and carbon dioxide (the latter produced in small quantities). Also, because methanol is a liquid, it is easier to store and transport than hydrogen gas, and is safer (it won't explode). Methanol also has a high energy density--a little goes a long way, making it especially interesting for portable devices.

The DMFCs currently on the market, however, have limitations. For example, the material currently used for the electrolyte sandwiched between the electrodes is expensive. Even more important: that material, known as Nafion, is permeable to methanol, allowing some of the fuel to seep across the center of the fuel cell. Among other disadvantages, this wastes fuel--and lowers the efficiency of the cell--because the fuel isn't available for the reactions that generate electricity.

Using a relatively new technique known as layer-by-layer assembly, the MIT researchers created an alternative to Nafion. "We were able to tune the structure of [our] film a few nanometers at a time," Hammond said, getting around some of the problems associated with other approaches. The result is a thin film that is two orders of magnitude less permeable to methanol but compares favorably to Nafion in proton conductivity.

To test their creation, the engineers coated a Nafion membrane with the new film and incorporated the whole into a direct methanol fuel cell. The result was an increase in power output of more than 50 percent.

The team is now exploring whether the new film could be used by itself, completely replacing Nafion. To that end, they have been generating thin films that stand alone, with a consistency much like plastic wrap.

In addition, Hammond and colleagues have begun exploring the new material's potential use in photovoltaics. That work is funded by the MIT Energy Initiative. This Institute-wide initiative includes research, education, campus energy management and outreach activities, an interdisciplinary approach that covers all areas of energy supply and demand, security and environmental impact. For more information, please visit http://web.mit.edu/mitei.