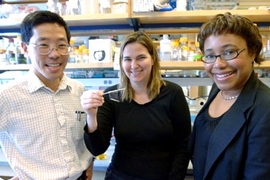 ↓ Download Image
Caption: From left, Professors Yet-Ming Chiang, Angela Belcher and Paula Hammond display a virus-loaded film that can serve as the anode of a battery.
Credits: Photo / Donna Coveney

Caption:
From left, Professors Yet-Ming Chiang, Angela Belcher and Paula Hammond display a virus-loaded film that can serve as the anode of a battery.
Credits:
Photo / Donna Coveney

MIT scientists have harnessed the construction talents of tiny viruses to build ultra-small "nanowire" structures for use in very thin lithium-ion batteries.

By manipulating a few genes inside these viruses, the team was able to coax the organisms to grow and self-assemble into a functional electronic device.

The goal of the work, led by MIT Professors Angela Belcher, Paula Hammond and Yet-Ming Chiang, is to create batteries that cram as much electrical energy into as small or lightweight a package as possible. The batteries they hope to build could range from the size of a grain of rice up to the size of existing hearing aid batteries.

Batteries consist of two opposite electrodes -- an anode and cathode -- separated by an electrolyte. In the current work, the MIT team used an intricate assembly process to create the anode.

Specifically, they manipulated the genes in a laboratory strain of a common virus, making the microbes collect exotic materials -- cobalt oxide and gold. And because these viruses are negatively charged, they can be layered between oppositely charged polymers to form thin, flexible sheets.

The result? A dense, virus-loaded film that serves as an anode.

A report on the work will appear in the April 7 issue of Science.

In their research, the MIT team altered the virus's genes so they make protein coats that collect molecules of cobalt oxide, plus gold. The viruses then align themselves on the polymer surface to form ultrathin wires. Each virus, and thus the wire, is only 6 nanometers (6 billionths of a meter) in diameter, and 880 nanometers in length.

"We can make them in larger diameters," Belcher said, "but they are all 880 nanometers in length," which matches the length of the individual virus particles. And, "once we've altered the genes of the virus to grow the electrode material, we can easily clone millions of identical copies of the virus to use in assembling our batteries.

"For the metal oxide we chose cobalt oxide because it has very good specific capacity, which will produce batteries with high energy density," meaning it can store two or three times more energy for its size and weight compared to previously used battery electrode materials. And adding the gold further increased the wires' energy density, she added.

Equally important, the reactions needed to create nanowires occur at normal room temperatures and pressures, so there is no need for expensive pressure-cooking technology to get the job done.

The work is important, too, because energy density is a vital quality in batteries. A lack of energy density -- meaning the amount of charge a battery of a given size can usefully carry -- is what has hampered development of electric cars, since existing batteries are generally too heavy and too weak to compete with gasoline as an energy source. Still, battery technology is gradually being improved and may someday even become competitive as the price of oil escalates.

"The nanoscale materials we've made supply two to three times the electrical energy for their mass or volume, compared to previous materials," the team reported.

The researchers' work was spurred by "growing evidence that 'nanostructured' materials can improve the electrochemical properties of lithium-ion batteries," compared to more conventional batteries based on older technologies, the team wrote in Science.

But to create new battery materials, Belcher noted, special control is needed so just the right amounts of the exotic materials end up exactly where they belong. Cobalt oxide "has shown excellent electrochemical cycling properties, and is thus under consideration as an electrode for advanced lithium-ion batteries."

In earlier research, Belcher and colleagues learned they could exploit the abilities of microbes to recognize the correct molecules and assemble them where they belong.

A new means of inducing this order comes from self-assembly, a tool that is commonly used now in Hammond's lab. "By harnessing the electrostatic nature of the assembly process with the functional properties of the virus, we can create highly ordered composite thin films combining the function of the virus and polymer systems," Hammond said.

A version of this article appeared in MIT Tech Talk on April 12, 2006 (download PDF).