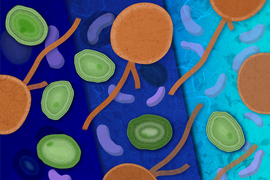 ↓ Download Image
Caption: Where the microbe Prochlorococcus, pictured in green, lives is not determined primarily by temperature, as previously thought. An MIT study finds that a relationship with bacteria, purple, and a shared predator, orange, actually sets the microbe’s range.
Credits: Image: Jose-Luis Olivares, MIT

Caption:
Where the microbe Prochlorococcus, pictured in green, lives is not determined primarily by temperature, as previously thought. An MIT study finds that a relationship with bacteria, purple, and a shared predator, orange, actually sets the microbe’s range.
Credits:
Image: Jose-Luis Olivares, MIT

Prochlorococcus are the smallest and most abundant photosynthesizing organisms on the planet. A single Prochlorococcus cell is dwarfed by a human red blood cell, yet globally the microbes number in the octillions and are responsible for a large fraction of the world’s oxygen production as they turn sunlight into energy.

Prochlorococcus can be found in the ocean’s warm surface waters, and their population drops off dramatically in regions closer to the poles. Scientists have assumed that, as with many marine species, Prochlorococcus’ range is set by temperature: The colder the waters, the less likely the microbes are to live there.

But MIT scientists have found that where the microbe lives is not determined primarily by temperature. While Prochlorococcus populations do drop off in colder waters, it’s a relationship with a shared predator, and not temperature, that sets the microbe’s range. These findings, published today in the Proceedings of the National Academy of Sciences, could help scientists predict how the microbes’ populations will shift with climate change.

“People assume that if the ocean warms up, Prochlorococcus will move poleward. And that may be true, but not for the reason they’re predicting,” says study co-author Stephanie Dutkiewicz, senior research scientist in MIT’s Department of Earth, Atmospheric and Planetary Sciences (EAPS). “So, temperature is a bit of a red herring.”

Dutkiewicz’s co-authors on the study are lead author and EAPS Research Scientist Christopher Follett, EAPS Professor Mick Follows, François Ribalet and Virginia Armbrust of the University of Washington, and Emily Zakem and David Caron of the University of Southern California at Los Angeles.

While temperature is thought to set the range of Prochloroccus and other phytoplankton in the ocean, Follett, Dutkiewicz, and their colleagues noticed a curious dissonance in data.

The team examined observations from several research cruises that sailed through the northeast Pacific Ocean in 2003, 2016, and 2017. Each vessel traversed different latitudes, sampling waters continuously and measuring concentrations of various species of bacteria and phytoplankton, including Prochlorococcus.

The MIT team used the publicly archived cruise data to map out the locations where Prochlorococcus noticeably decreased or collapsed, along with each location’s ocean temperature. Surprisingly, they found that Prochlorococcus’ collapse occurred in regions of widely varying temperatures, ranging from around 13 to 18 degrees Celsius. Curiously, the upper end of this range has been shown in lab experiments to be suitable conditions for Prochlorococcus to grow and thrive.

“Temperature itself was not able to explain where we saw these drop-offs,” Follett says.

Follett was also working out an alternate idea related to Prochlorococcus and nutrient supply. As a byproduct of its photosynthesis, the microbe produces carbohydrate — an essential nutrient for heterotrophic bacteria, which are single-celled organisms that do not photosynthesize but live off the organic matter produced by phytoplankton.

“Somewhere along the way, I wondered, what would happen if this food source Prochlorococcus was producing increased? What if we took that knob and spun it?” Follett says.

In other words, how would the balance of Prochlorococcus and bacteria shift if the bacteria’s food increased as a result of, say, an increase in other carbohydrate-producing phytoplankton? The team also wondered: If the bacteria in question were about the same size as Prochlorococcus, the two would likely share a common grazer, or predator. How would the grazer’s population also shift with a change in carbohydrate supply?

“Then we went to the whiteboard and started writing down equations and solving them for various cases, and realized that as soon as you reach an environment where other species add carbohydrates to the mix, bacteria and grazers grow up and annihilate Prochlorococcus,” Dutkiewicz says.

When they ran the simulations without incorporating a representation of bacteria, they found that Prochlorococcus persisted all the way to the poles, contrary to theory and observations. When they added in the equations outlining the relationship between the microbe, bacteria, and a shared predator, Prochlorococcus’ range shifted away from the poles, matching the observations of the original research cruises.

In particular, the team observed that Prochlorococcus thrived in waters with very low nutrient levels, and where it is the dominant source of food for bacteria. These waters also happen to be warm, and Prochlorococcus and bacteria live in balance, along with their shared predator. But in more nutrient-rich enviroments, such as polar regions, where cold water and nutrients are upwelled from the deep ocean, many more species of phytoplankton can thrive. Bacteria can then feast and grow on more food sources, and in turn feed and grow more of its shared predator. Prochlorococcus, unable to keep up, is quickly decimated.

The results show that a relationship with a shared predator, and not temperature, sets Prochlorococcus’ range. Incorporating this mechanism into models will be crucial in predicting how the microbe — and possibly other marine species — will shift with climate change.

“Prochlorococcus is a big harbinger of changes in the global ocean,” Dutkiewicz says. “If its range expands, that’s a canary — a sign that things have changed in the ocean by a great deal.”

“There are reasons to believe its range will expand with a warming world,” Follett adds.” But we have to understand the physical mechanisms that set these ranges. And predictions just based on temperature will not be correct.”

This research was supported in part by the Simons Collaboration on Computational Biogeochemical Modeling of Marine Ecosystems (CBIOMES), and by NASA.

Seeding oceans with iron may not impact climate change