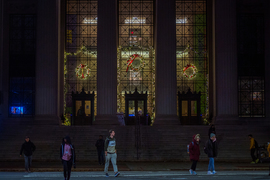 ↓ Download Image
Caption: “It brings everyone together,” says administrative assistant Madelyn Musick, who bought festive decorations for this year’s event. “It gives everyone a break from their research to do something fun that’s relaxing but that also encourages creativity.”
Credits: Image: Gretchen Ertl 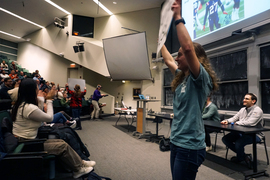 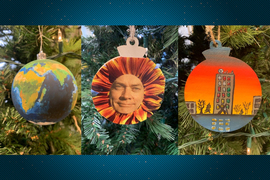 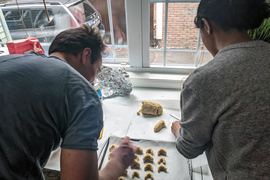 ↓ Download Image
Caption: Graduate students in the lab of associate professor of chemistry Yogesh Surendranath work on the holiday cookies they gave to staff members and others that make their work possible all year.
Credits: Image: Courtesy of the Surendranath Group 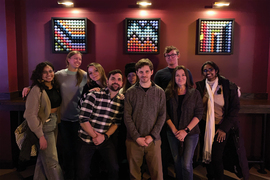 ↓ Download Image
Caption: Members of the lab of Laurie Boyer, a professor of biology and biological engineering, posed for a picture during their holiday gathering at a new minigolf venue in the Seaport District.
Credits: Image: Courtesy of the Boyer Lab

Caption:
A holiday tradition such as the ornament-making party in EAPS “gives everyone a break from their research to do something fun that’s relaxing but that also encourages creativity," says Administrative Assistant Madelyn Musick.
Credits:
Image: Gretchen Ertl

Amid final exams and year-end research crunches, this is also the time of year when many in the MIT community take time to have some fun and express gratitude for the people that make their work possible. Each year across the Institute, community members gather for holiday parties and socializing in a more relaxed environment than the lab or classroom.

Across MIT’s five schools and the Schwarzman College of Computing, most departments, labs, and centers have festivities of some sort, from gatherings of Sloanies to holiday parties in the School of Humanities, Arts, and Social Science. Below we’ve highlighted just a few of the more unique traditions that some groups have to mark the end of a busy semester. 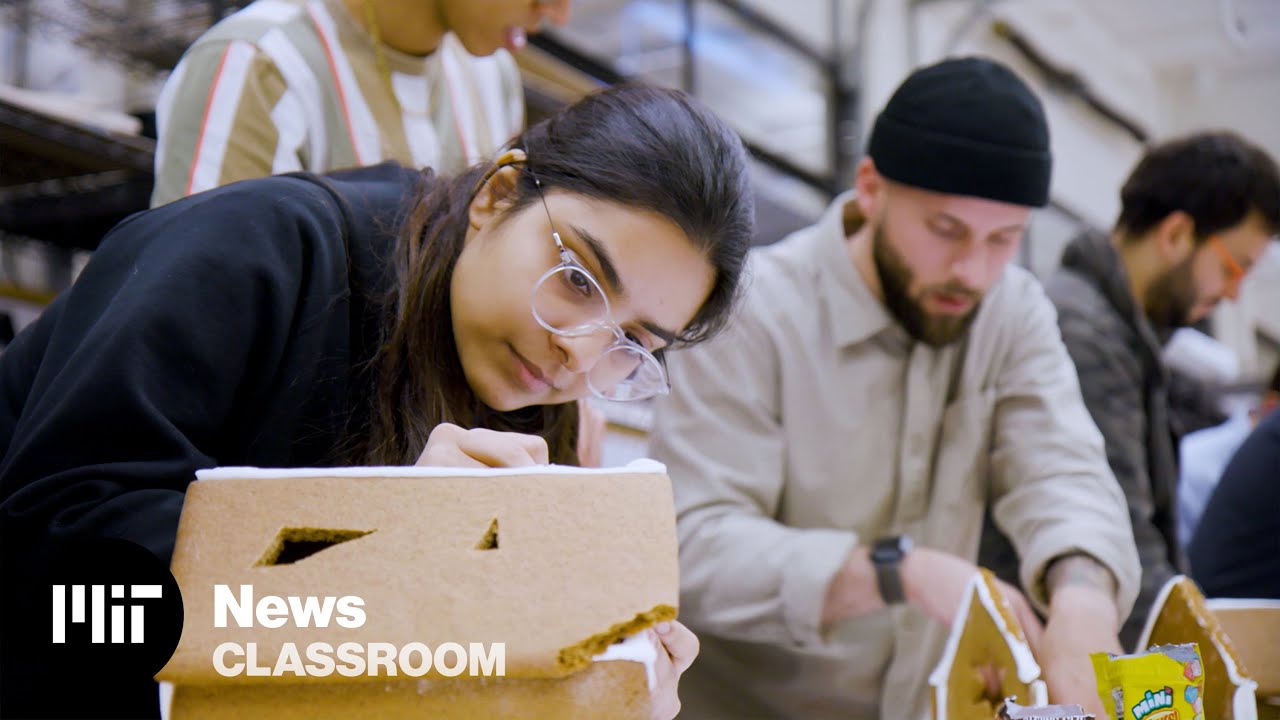 Ahead of the semester’s final review, the Department of Architecture surprised its first-year graduate students with a hands-on challenge to reconsider the design of a gingerbread house, providing everyone with sweet-smelling houses and the tools to deconstruct them.

“We’re giving them some opportunities to destress,” Associate Professor William O'Brien Jr. said, noting the department did something similar with a pumpkin carving contest in October. “Being somewhere new during the semester, things can get stressful.”

The challenge made for a chaotic scene in room 7-432 as teaching assistants, fellows, instructors, and students got their hands dirty — and sticky — in the quest to create a more inclusive gingerbread structure.

“It’s awesome to have a non-hierarchical social setting, whereas ordinarily students are presenting and we’re giving feedback,” O'Brien Jr. said.

“It’s spectacularly fun,” said graduate student Mateo Fernandez, who is new to the United States and had never seen a gingerbread house before. “It’s a nice relief from everything we’re usually doing. It also helps us get to know each other outside of the serious academic environment, and helps us learn to work together.”

Students rally the audience during this year’s chemical engineering student skits, which are part of the department’s annual holiday celebration.
Image: Courtesy of MIT’s Dept. of Chemical Engineering

For as long as anyone can remember, the chemical engineering department’s holiday party has begun with elaborate skits by students, faculty, and sometimes staff, that humorously depict faculty members, courses, and current events.

Institute Professor and department head Paula Hammond describes them as “drama ensembles of sorts, sometimes with multiple acts — and many inside jokes.”

“We use the skits as a chance to lampoon ourselves,” says Hammond, who participated as a student in the department in the 1980s. “Faculty gets lampooned more than anyone, but that’s the spirit of the whole thing.”

Over the years the skits have moved more to video format, but the one constant is a depiction of faculty, often by students with fitting outfits and spot-on impressions. Hammond says the student skits are always better than the faculty skits.

“Students who spend an entire semester watching a faculty member know exactly how they write erratically on the chalkboard, or ramble off into stories from the old days, or get overexcited about an integral,” Hammond says.

Hammond says faculty members consider it an honor to be roasted by students, and remembers one faculty member upset after not getting riffed on enough in the annual tradition. She also says it’s a great way for students to tell their stories and build empathy.

“It’s fun to laugh and wink at faculty members and share the student perspective,” Hammond says. “What makes you laugh is the everyday, unusual little things about all of us that make us human. It acknowledges that the faculty aren’t superpowers. They’re regular people with their own little flaws. That’s comforting.”

In another longstanding tradition, each year the Department of Earth, Atmospheric, and Planetary Science has a party in early December where faculty, staff, and students get together and create their own ornaments to hang on a department tree. This year’s event doubled as an ice cream social.

Members of the department admire the tree for a week, and everybody votes on their favorite ornament at the ensuing holiday party. The three top winners get a prize.

“It brings everyone together,” says administrative assistant Madelyn Musick, who bought paint, glitter, and other festive decorations for this year’s event. “It gives everyone a break from their research to do something fun that’s relaxing but that also encourages creativity.”

Graduate students in the lab of associate professor of chemistry Yogesh Surendranath work on the holiday cookies they gave to staff members and others that make their work possible all year.
Image: Courtesy of the Surendranath Group

Researchers in the lab of associate professor of chemistry Yogesh Surendranath are used to mixing ingredients and catalyzing reactions. But around the holidays, they direct their talents to a more tasty kind of chemical processing.

Each year, graduate students and postdocs gather to make cookies and other baked goods for the staff members that make their work possible.

The holidays also happen to be the time when first-year graduate students join the lab, so it doubles as a fun way to get to know their fellow researchers outside of the lab setting.

“We spend a lot of time here. It’s not just a normal 9-5 job, and so it’s always nice to have a good relationship outside of work,” graduate student Bryan Yuk-Wah Tang says. “It’s something I really appreciate about our lab.”

This year, the event took place at a student’s house and culminated in a holiday party where the students distributed the goods along with cards expressing thanks.

“It’s a good opportunity to thank everybody who works hard and goes out of their way to support us,” Tang says. “A lot of staff members at MIT go above and beyond. It’s great to have this community, and we love to show our appreciation for that.”

Members of the lab of Laurie Boyer, a professor of biology and biological engineering, posed for a picture during their holiday gathering at a new minigolf venue in the Seaport District.
Image: Courtesy of the Boyer Lab

Laurie Boyer, a professor of biology and biological engineering, took her lab group — graduate students, research staff, and undergraduates — to a new minigolf venue in the Seaport District to mark the end of the semester. The group also got dinner together and explored an outdoor market nearby. Highlights included several improbable hole-in-ones (no one in the group considered themselves minigolf experts before the outing) and some much-needed hot chocolate at the outdoor market.

“I think it builds community,” says Catherine Della Santina, a PhD student in Boyer’s lab. “We see each other every day, but we mostly talk about science. Instead, we talked about stuff like the summer camps we went to growing up, which you might not mention when you’re inoculating cells or doing protocol prep. You get to know people better.”

“It gets people excited to come back after the break,” she says.

Scene at MIT: Dancing the night away