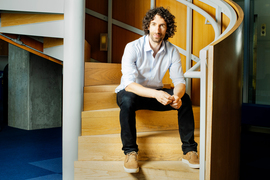 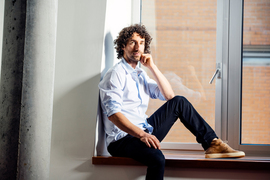 ↓ Download Image
Caption: Bresler says he was drawn to the ambient intellectual atmosphere at MIT, as well as the supportive environment for launching bold research quests and trying to make progress in new areas of study.
Credits: Photo: M. Scott Brauer

Caption:
Bresler says he was drawn to the ambient intellectual atmosphere at MIT, as well as the supportive environment for launching bold research quests and trying to make progress in new areas of study.
Credits:
Photo: M. Scott Brauer

A visual model of Guy Bresler’s research would probably look something like a Venn diagram. He works at the four-way intersection where theoretical computer science, statistics, probability, and information theory collide.

“There are always new things to do be done at the interface. There are always opportunities for entirely new questions to ask,” says Bresler, an associate professor who recently earned tenure in MIT’s Department of Electrical Engineering and Computer Science (EECS).

A theoretician, he aims to understand the delicate interplay between structure in data, the complexity of models, and the amount of computation needed to learn those models. Recently, his biggest focus has been trying to unveil fundamental phenomena that are broadly responsible for determining the computational complexity of statistics problems — and finding the “sweet spot” where available data and computation resources enable researchers to effectively solve a problem.

The majority of modern statistical problems exhibits this sort of trade-off between computation and data, with applications ranging from drug development to weather prediction. Another well-studied and practically important example is cryo-electron microscopy, Bresler says. With this technique, researchers use an electron microscope to take images of molecules in different orientations. The central challenge is how to solve the inverse problem — determining the molecule’s structure given the noisy data. Many statistical problems can be formulated as inverse problems of this sort.

One aim of Bresler’s work is to elucidate relationships between the wide variety of different statistics problems currently being studied. The dream is to classify statistical problems into equivalence classes, as has been done for other types of computational problems in the field of computational complexity. Showing these sorts of relationships means that, instead of trying to understand each problem in isolation, researchers can transfer their understanding from a well-studied problem to a poorly understood one, he says.

For Bresler, a desire to theoretically understand various basic phenomena inspired him to follow a path into academia.

Both of his parents worked as professors and showed how fulfilling academia can be, he says. His earliest introduction to the theoretical side of engineering came from his father, who is an electrical engineer and theoretician studying signal processing. Bresler was inspired by his work from an early age. As an undergraduate at the University of Illinois at Urbana-Champaign, he bounced between physics, math, and computer science courses. But no matter the topic, he gravitated toward the theoretical viewpoint.

In graduate school at the University of California at Berkeley, Bresler enjoyed the opportunity to work in a wide variety of topics spanning probability, theoretical computer science, and mathematics. His driving motivator was a love of learning new things.

“Working at the interface of multiple fields with new questions, there is a feeling that one had better learn as much as possible if one is to have any chance of finding the right tools to answer those questions,” he says.

That curiosity led him to MIT for a postdoc in the Laboratory for Information and Decision Systems (LIDS) in 2013, and then he joined the faculty two years later as an assistant professor in EECS, a member of LIDS, and a core faculty member in the Institute for Data, Systems, and Society (IDSS). He was named an associate professor in 2019.

Bresler says he was drawn to the intellectual atmosphere at MIT, as well as the supportive environment for launching bold research quests and trying to make progress in new areas of study.

“What really struck me was how vibrant and energetic and collaborative MIT is. I have this mental list of more than 20 people here who I would love to have lunch with every single week and collaborate with on research. So just based on sheer numbers, joining MIT was a clear win,” he says.

He’s especially enjoyed collaborating with his students, who continually teach him new things and ask deep questions that drive exciting research projects. One such student, Matthew Brennan, who was one of Bresler’s closest collaborators, tragically and unexpectedly passed away in January, 2021.

The shock from Brennan’s death is still raw for Bresler, and it derailed his research for a time.

“Beyond his own prodigious capabilities and creativity, he had this amazing ability to listen to an idea of mine that was almost completely wrong, extract from it a useful piece, and then pass the ball back,” he says. “We had the same vision for what we wanted to achieve in the work, and we were driven to try to tell a certain story. At the time, almost nobody was pursuing this particular line of work, and it was in a way kind of lonely. But he trusted me, and we encouraged one another to keep at it when things seemed bleak.”

Those lessons in perseverance fuel Bresler as he and his students continue exploring questions that, by their nature, are difficult to answer.

One area he’s worked in on-and-off for over a decade involves learning graphical models from data. Models of certain types of data, such as time-series data consisting of temperature readings, are often constructed by domain experts who have relevant knowledge and can build a reasonable model, he explains.

But for many types of data with complex dependencies, such as social network or biological data, it is not at all clear what structure a model should take. Bresler’s work seeks to estimate a structured model from data, which could then be used for downstream applications like making recommendations or better predicting the weather.

The basic question of identifying good models, whether algorithmically in a complex setting or analytically, by specifying a useful toy model for theoretical analysis, connects the abstract work with engineering practice, he says.

“In general, modeling is an art. Real life is complicated and if you write down some super-complicated model that tries to capture every feature of a problem, it is doomed,” says Bresler. “You have to think about the problem and understand the practical side of things on some level to identify the correct features of the problem to be modeled, so that you can hope to actually solve it and gain insight into what one should do in practice.”

Outside the lab, Bresler often finds himself solving very different kinds of problems. He is an avid rock climber and spends much of his free time bouldering throughout New England.

“I really love it. It is a good excuse to get outside and get sucked into a whole different world. Even though there is problem solving involved, and there are similarities at the philosophical level, it is totally orthogonal to sitting down and doing math,” he says.