The best semiconductor of them all?

Researchers have found a material that can perform much better than silicon. The next step is finding practical and economic ways to make it.
David L. Chandler | MIT News Office
Publication Date:
Press Inquiries 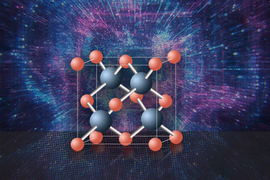 Silicon is one of the most abundant elements on Earth, and in its pure form the material has become the foundation of much of modern technology, from solar cells to computer chips. But silicon’s properties as a semiconductor are far from ideal.

For one thing, although silicon lets electrons whizz through its structure easily, it is much less accommodating to “holes” — electrons’ positively charged counterparts — and harnessing both is important for some kinds of chips. What’s more, silicon is not very good at conducting heat, which is why overheating issues and expensive cooling systems are common in computers.

Now, a team of researchers at MIT, the University of Houston, and other institutions has carried out experiments showing that a material known as cubic boron arsenide overcomes both of these limitations. It provides high mobility to both electrons and holes, and has excellent thermal conductivity. It is, the researchers say, the best semiconductor material ever found, and maybe the best possible one.

So far, cubic boron arsenide has only been made and tested in small, lab-scale batches that are not uniform. The researchers had to use special methods originally developed by former MIT postdoc Bai Song to test small regions within the material. More work will be needed to determine whether cubic boron arsenide can be made in a practical, economical form, much less replace the ubiquitous silicon. But even in the near future, the material could find some uses where its unique properties would make a significant difference, the researchers say.

Earlier research, including work by David Broido, who is a co-author of the new paper, had theoretically predicted that the material would have high thermal conductivity; subsequent work proved that prediction experimentally. This latest work completes the analysis by confirming experimentally a prediction made by Chen’s group back in 2018: that cubic boron arsenide would also have very high mobility for both electrons and holes, “which makes this material really unique,” says Chen.

The earlier experiments showed that the thermal conductivity of cubic boron arsenide is almost 10 times greater than that of silicon. “So, that is very attractive just for heat dissipation,” Chen says. They also showed that the material has a very good bandgap, a property that gives it great potential as a semiconductor material.

Now, the new work fills in the picture, showing that, with its high mobility for both electrons and holes, boron arsenide has all the main qualities needed for an ideal semiconductor. “That’s important because of course in semiconductors we have both positive and negative charges equivalently. So, if you build a device, you want to have a material where both electrons and holes travel with less resistance,” Chen says.

Silicon has good electron mobility but poor hole mobility, and other materials such as gallium arsenide, widely used for lasers, similarly have good mobility for electrons but not for holes.

“Heat is now a major bottleneck for many electronics,” says Shin, the paper’s lead author. “Silicon carbide is replacing silicon for power electronics in major EV industries including Tesla, since it has three times higher thermal conductivity than silicon despite its lower electrical mobilities. Imagine what boron arsenides can achieve, with 10 times higher thermal conductivity and much higher mobility than silicon. It can be a gamechanger.”

Shin adds, “The critical milestone that makes this discovery possible is advances in ultrafast laser grating systems at MIT,” initially developed by Song. Without that technique, he says, it would not have been possible to demonstrate the material’s high mobility for electrons and holes.

The electronic properties of cubic boron arsenide were initially predicted based on quantum mechanical density function calculations made by Chen’s group, he says, and those predictions have now been validated through experiments conducted at MIT, using optical detection methods on samples made by Ren and members of the team at the University of Houston.

Not only is the material’s thermal conductivity the best of any semiconductor, the researchers say, it has the third-best thermal conductivity of any material — next to diamond and isotopically enriched cubic boron nitride. “And now, we predicted the electron and hole quantum mechanical behavior, also from first principles, and that is also proven to be true,” Chen says.

“This is impressive, because I actually don’t know of any other material, other than graphene, that has all these properties,” he says. “And this is a bulk material that has these properties.”

The challenge now, he says, is to figure out practical ways of making this material in usable quantities. The current methods of making it produce very nonuniform material, so the team had to find ways to test just small local patches of the material that were uniform enough to provide reliable data. While they have demonstrated the great potential of this material, “whether or where it’s going to actually be used, we do not know,” Chen says.

“Silicon is the workhorse of the entire industry,” says Chen. “So, OK, we’ve got a material that’s better, but is it actually going to offset the industry? We don’t know.” While the material appears to be almost an ideal semiconductor, “whether it can actually get into a device and replace some of the current market, I think that still has yet to be proven.”

He adds, “This potentially could be really important, and people haven’t really even paid attention to this material.” Now that boron arsenide’s desirable properties have become more clear, suggesting the material is “in many ways the best semiconductor,” he says, “maybe there will be more attention paid to this material.”

For commercial uses, Shin says, “one grand challenge would be how to produce and purify cubic boron arsenide as effectively as silicon. … Silicon took decades to win the crown, having purity of over 99.99999999 percent, or ‘10 nines’ for mass production today.”

For it to become practical on the market, Chen says, “it really requires more people to develop different ways to make better materials and characterize them.” Whether the necessary funding for such development will be available remains to be seen, he says.

Physics World has named two research advances by MIT researchers to its list of the Top 10 Breakthroughs of the Year. Prof. Gang Chen and his colleagues were selected for their work “showing that cubic boron arsenide is one of the best semiconductors known to science.” Prof. Asegun Henry, grad student Alina LaPotin and their colleagues were nominated for “constructing a thermophotovoltaic (TPV) cell with an efficiency of more than 40%.”

NBC News reporter Kimmy Yam notes that months after having all charges he faced under the “China Initiative” dismissed, Prof. Gang Chen and his colleagues have discovered a new material that can perform better than silicon. "The discovery could have far-reaching effects, as silicon is currently among the most widely used semiconductors, making up the foundation of modern technology from computer chips to smartphones," writes Yam.

Researchers at MIT believe they have found a new semiconductor that's better than silicon, which could open the doors to potentially faster and smaller computer chips in the future, reports Rachel Cheung for Vice. “Cubic boron arsenide has significantly higher mobility to both electronics and their positively charged counterparts than silicon, the ubiquitous semiconductor used in electronics and computers,” explains Cheung.

A material’s insulating properties can be tuned at will

New polymer films conduct heat instead of trapping it