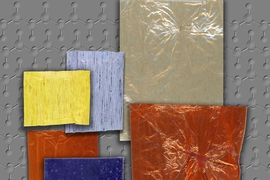 ↓ Download Image
Caption: The visual and thermal properties of polyethylene can be tweaked to produce colorful films with a wide range of heat-radiating capabilities.
Credits: Image: Felice Frankel

Caption:
The visual and thermal properties of polyethylene can be tweaked to produce colorful films with a wide range of heat-radiating capabilities.
Credits:
Image: Felice Frankel

The color of a material can often tell you something about how it handles heat. Think of wearing a black shirt on a sweltering summer’s day — the darker the pigment, the warmer you’re likely to feel. Likewise, the more transparent a glass window, the more heat it can let through. A material’s responses to visible and infrared radiation are often naturally linked.

Now MIT engineers have made samples of strong, tissue-like polymer material, the color and heat properties of which they can tailor independently of the other. For instance, they have fabricated samples of very thin black film designed to reflect heat and stay cool. They’ve also made films exhibiting a rainbow of other colors, each made to reflect or absorb infrared radiation regardless of the way they respond to visible light.

The researchers can specifically tune the color and heat properties of this new material to fit the requirements for a host of wide-ranging applications, including colorful, heat-reflecting building facades, windows, and roofs; light-absorbing, heat-dissipating covers for solar panels; and lightweight fabric for clothing, outerwear, tents, and backpacks — all designed to either trap or reflect heat, depending on the environments in which they would be used.

“With this material, everything could look more colorful, because then you wouldn’t be concerned with what color does to the thermal balance of, say, a building, or a window, or your clothing,” says Svetlana Boriskina, a research scientist in MIT’s Department of Mechanical Engineering.

For this work, Boriskina was inspired by the vibrant colors in stained-glass windows, which for centuries have been made by adding particles of metals and other natural pigments to glass.

“However, despite providing excellent visual transparency, glass has many limitations as a material,” Boriskina notes. “It is bulky, inflexible, fragile, does not spread heat well, and is obviously not suitable for wearable applications.”

She says that while it’s relatively simple to tailor the color of glass, the material’s response to heat is difficult to tune. For instance, glass panels reflect room-temperature heat and trap it inside the room. Furthermore, if colored glass is exposed to incoming sunlight from a particular direction, the heat from the sun can create a hotspot, which is difficult to dissipate in glass. If a material like glass can’t conduct or dissipate heat well, that heat could damage the material.

The same can be said for most plastics, which can be engineered in any color but for the most part are thermal absorbers and insulators, concentrating and trapping heat rather than reflecting it away.

For the past several years, Chen’s lab has been looking into ways to manipulate flexible, lightweight polymer materials to conduct, rather than insulate, heat, mostly for applications in electronics. In previous work, the researchers found that by carefully stretching polymers like polyethylene, they could change the material’s internal structure in a way that also changed its heat-conducting properties.

Boriskina thought this technique might be useful not just for fabricating polymer-based electronics, but also in architecture and apparel. She adapted this polymer-fabrication technique, adding a twist of color.

“It’s very hard to develop a new material with all these different properties in it,” she says. “Usually if you tune one property, the other gets destroyed. Here, we started with one property that was discovered in this group, and then we added a new property creatively. All together it works as a multifunctional material.”

To fabricate the colorful films, the team started with a mixture of polyethylene powder and a chemical solvent, to which they added certain nanoparticles to give the film a desired color. For instance, to make black film, they added particles of silicon; other red, blue, green, and yellow films were made with the addition of various commercial dyes.

The team then attached each nanoparticle-embedded film onto a roll-to-roll apparatus, which they heated up to soften the film, making it more pliable as the researchers carefully stretched the material.

As they stretched each film, they found, unsurprisingly, that the material became more transparent. They also observed that polyethylene’s microscopic structure changed as it stretched. Where normally the material’s polymer chains resemble a disorganized tangle, similar to cooked spaghetti, when stretched these chains straighten out, forming parallel fibers.

When the researchers placed each sample under a solar simulator — a lamp that mimics the visible and thermal radiation of the sun — they found the more stretched out a film, the more heat it was able to dissipate. The long, parallel polymer chains essentially provided a direct route along which heat could travel. Along these chains, heat, in the form of phonons, could then shoot away from its source, in a “ballistic” fashion, avoiding the formation of hotspots.

The researchers also found that the less they stretched the material, the more insulating it was, trapping heat, and forming hotspots within polymer tangles.

By controlling the degree to which the material is stretched, Boriskina could control polyethylene’s heat-conducting properties, regardless of the material’s color. She also carefully chose the nanoparticles, not just by their visual color, but also by their interactions with invisible radiative heat. She says researchers can potentially use this technique to produce thin, flexible, colorful polymer films, that can conduct or insulate heat, depending on the application.

Going forward, she plans to launch a website that offers algorithms to calculate a material’s color and thermal properties, based on its dimensions and internal structure.

In addition to films, her group is now working on fabricating nanoparticle-embedded polyethylene thread, which can be stitched together to form lightweight apparel, designed to be either insulating, or cooling.

“This is in film factor now, but we’re working it into fibers and fabrics,” Boriskina says. “Polyethylene is produced by the billions of tons and could be recycled, too. I don’t see any significant impediments to large-scale production.”

This research was supported, in part, by the Combat Capabilities Development Command Soldier Center.

Insulators made into conductors