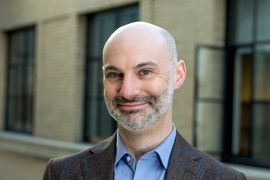 Agustín Rayo PhD ’01, an accomplished philosopher and experienced MIT administrator, has been named the new dean of the Institute’s School of Humanities, Arts, and Social Sciences (SHASS). The appointment is effective Feb. 1.

Rayo, a professor in MIT’s Department of Linguistics and Philosophy, has been a faculty member of the Institute since 2005. He served as associate dean of SHASS from 2016 through 2019, and has held the role of interim dean of SHASS since June 2021. Rayo will be the 10th full-time dean in SHASS history.

“I want to continue the work of past SHASS deans, to make sure that the fields we study at the school remain at the heart of the MIT experience,” Rayo says. “If you want to change the world, you need to understand how it works.”

Rayo’s acumen as a campus leader, scholar, and teacher makes him ideally suited to lead SHASS, according to MIT President L. Rafael Reif.

“Agustín brings to the deanship a wonderful record of leadership in SHASS and of service to all of MIT, from faculty governance to student life,” Reif says. “Warm, welcoming, and a sensitive listener, he pairs an infectious enthusiasm for the inherent value of the liberal arts with a clear vision of how they can inform and enrich our understanding in the STEM fields too. I have been grateful for his contributions as a member of Academic Council this year — and I look forward to working with him as he steps into this new role.”

Humanistic knowledge and the MIT mission

Rayo’s appointment as the Kenan Sahin Dean of the School of Humanities, Arts, and Social Sciences was announced today by Provost Martin A. Schmidt in a letter to the MIT community.

“Agustín values excellence and is an engaged leader and member of our community who I know will work thoughtfully and rigorously on behalf of SHASS and the Institute,” Schmidt wrote.

Having spent about two decades at the Institute already, Rayo says he intends to support all members of the SHASS community as they pursue a wide variety of research, teaching, and community-building projects.

“I really do want to work with our faculty and students and staff to understand where they want to go, and work with them to get there,” Rayo says.

SHASS features 21 departments, programs, centers, labs, and consortia, which house over 170 full-time faculty members. SHASS formally became one of MIT’s schools in 1950, although several subjects within it have been taught since the Institute opened for students in 1865. (MIT was founded in 1861.)

Rayo recently spelled out his vision of the complementarities between SHASS and the whole of MIT in a November op-ed in Times Higher Education, which he co-authored with Hashim Sarkis, dean of MIT’s School of Architecture and Planning.

“The MIT mission is to serve humankind, and the arts and humanities are essential resources for knowledge and understanding of the human condition,” Rayo and Sarkis wrote. “The insights of science and engineering are, of course, crucial to addressing many of the world’s most urgent problems. But these fields operate within human societies, and can serve the world best when informed by the cultural, political, spatial, and economic complexities of human existence, beliefs, and ways of inhabiting the earth.”

Moreover, as Rayo and Sarkis put it, the “technical, scientific, and humanistic research domains … are also mutually informing modes of human knowledge. And many of today’s most consequential issues will be solved only with collaborative research.”

Rayo additionally notes that his experience serving as interim dean since June has reinforced his desire to collaborate with campus leaders across MIT.

“The president and provost have been incredibly thoughtful and helpful during this time, and the other deans have welcomed me as a member of the team,” he says. “A big attraction of the position is the chance to continue working with that team.”

Rayo’s scholarship deploys philosophical ideas about logic and language to scrutinize metaphysics and evaluate the limits of claims we can make about the world. He has published dozens of papers in peer-reviewed journals and several chapters in edited volumes, along with a well-regarded 2013 book, “The Construction of Logical Space” (Oxford University Press), which applies his ideas to mathematics as well as ontological issues more broadly.

Rayo was also the co-editor, with Gabriel Uzquiano, of a 2006 volume, “Absolute Generality” (Oxford University Press), and authored a 2019 philosophy textbook, “On the Brink of Paradox” (MIT Press), which received the 2020 PROSE award, granted by the Association of American Publishers for best textbook in the humanities.

Rayo received his BA in philosophy from National Autonomous University of Mexico. He received his PhD in philosophy in 2001 from MIT, with Vann McGee as his primary dissertation advisor; Robert Stalnaker and Stephen Yablo also served on his thesis committee.

After receiving his PhD, Rayo was a postdoc at the University of St. Andrews in Scotland, then an assistant professor at the University of California at San Diego. He joined the MIT faculty as an associate professor in 2005, and was Ford Career Development Professor from 2006 through 2009, receiving tenure from the Institute in 2008. Rayo became a full professor of philosophy in 2014.

In addition to his scholarship, Rayo has been a committed teacher throughout his years at MIT, engaging with undergraduates and helping surpervise dozens of PhD and master’s theses.

Rayo has also devoted a significant amount of effort and time to campus leadership and service activities at MIT. While serving as associate dean of SHASS from 2016 to 2019, Rayo was chair of the SHASS Faculty Diversity Committee, the SHASS Educational Advisory Committee, and the Digital Humanities Steering Committee.

More recently, Rayo has served since 2020 on the Computing Council of the MIT Schwarzman College of Computing, and as co-chair of MIT’s Committee on Departmental Life. He was on the Task Force on the Future of MIT Education in the 2013-2014 academic year, and served as housemaster of Senior House from 2010 to 2014.

Rayo was selected at the end of a process that featured a 10-member faculty advisory committee on the search. He succeeds Melissa Nobles, a political scientist who was appointed SHASS dean in 2015, then became MIT’s chancellor in 2021.

Prof. Agustín Rayo ’01, dean of the MIT School of Humanities, Arts and Social Sciences, speaks with The Tech about his goals for his time as dean, the importance of an education in the humanities, arts and social sciences, and his plans for advancing the school’s DEI efforts. “The humanities, arts, and social sciences are crucial to understanding the human condition and our complex social, political, and economic institutions,” says Rayo. “MIT’s SHASS classes help develop powerful career, leadership, and problem-solving skills.”