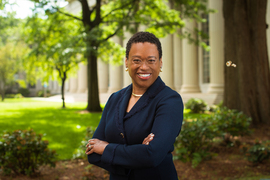 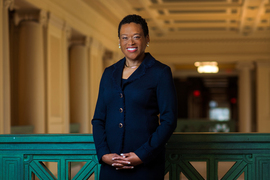 MIT has announced that its next chancellor will be Melissa Nobles, an accomplished scholar who has led the School of Humanities, Arts, and Social Sciences since 2015.

As chancellor, Nobles will oversee student life and learning, in a broad role that encompasses undergraduate and graduate education and student well-being, as well as strategic planning and fundraising for “all things students.” Nobles is set to become the new chancellor at a time of significant challenges, including the Covid-19 pandemic and increased polarization in society, and significant promise, as MIT continues to expand the resources and programs it devotes to student life and the campus community. She will officially assume her new role Aug. 18.

“Human societies face very serious challenges, and the world’s issues seem quite immediate and pressing, sitting here at our doorstep,” says Nobles, who is the Kenin Sahin Dean of the School of Humanities, Arts, and Social Sciences (SHASS) and a professor of political science. “Our responsibility to educate our students in order to face these challenges is more important than ever. It’s an honor to serve as chancellor and to continue building on MIT’s work to create a healthy and respectful learning environment — one that nurtures intellectual curiosity and emotional maturation.”

The appointment was announced today in a letter to the MIT community from President L. Rafael Reif, who cited the distinctive set of skills, interests, and experiences Nobles has brought to the Institute during her 26 years of service.

Recalling Nobles’ leadership as associate chair of the faculty and later as head of the Department of Political Science, Reif wrote: “The same qualities that shone so brightly then — her exceptional judgment and sense of fairness paired with her incisive intellect, humane wisdom, careful listening, unfailing eloquence and charismatic wit — continue to make her an invaluable member of MIT’s academic leadership.”

The provost and chancellor are the Institute’s two most senior academic appointments; both report to the president of MIT. The chancellor oversees matters including admissions, teaching and learning, residential life, student support, and efforts to prevent sexual harassment and misconduct. For the past 16 months, outgoing Chancellor Cynthia Barnhart has also has played a central role in MIT’s response to the Covid-19 pandemic.

The chancellor oversees and works closely with the vice chancellor for undergraduate and graduate education, and the vice president and dean for student life. In addition, the Institute Discrimination and Harassment Response (IDHR) office and the MindHandHeart initiative, which promotes mental health and community connections on campus, report directly to the chancellor.

Nobles says she looks forward to bringing to her new role the perspective and experience she has gained as a dean, a teacher, and a community member at MIT.

“As educators, we want to teach the whole student,” Nobles says, refering to opportunities for students to grow inside and outside the classroom. “At MIT, you shouldn’t hide your interests. We say to students, ‘Be your whole self.’”

Nobles succeeds Barnhart, who became chancellor in 2014 and implemented an ambitious and far-reaching set of measures to allow MIT to meet students evolving needs. During her tenure, Barnhart oversaw an expansion of MIT efforts to support mental health and wellness, implemented a multifaceted campaign to prevent sexual misconduct, expanded MIT’s Division of Student Life, and helped establish the IDHR Office and the MindHandHeart initiative.

More recently, Barnhart has led the Covid Decision Team, the group of senior leaders overseeing MIT’s Covid-related policy and planning decisions and response efforts. She announced last month that she would step down as chancellor and return to the faculty, where she serves as the Ford Foundation Professor of Engineering.

“Cindy Barnhart has developed and extended a whole infrastructure that makes it possible to address the critical issues we face today,” Nobles says. “Continuing to make sure that the Institute is fully supportive of its students, and that the lived experience of MIT is consonant with its values, will be central concerns for me in this new role.”

In addition to her own research, teaching, and professional service efforts, Nobles has held a series of leadership positions at MIT for over a decade. Nobles served as associate chair of the faculty from 2007 to 2009. She also headed MIT’s Department of Political Science from 2013 to 2015, before being named dean of SHASS, a position she has held since 2015.

Over the last year, Nobles has also been a member of the coordinating committee for MIT’s Task Force 2021 and Beyond, an Institute-wide effort aimed at envisioning and studying potential adaptations to education that MIT can make during and after the Covid-19 pandemic, in response to changing conditions and new needs.

In that context, as dean of SHASS, Nobles helped lead multiple efforts to ensure that campus education can be expansive, multidisciplinary, and socially relevant. Among other projects, Nobles has helped to build connections between the MIT Schwarzman College of Computing and existing academic fields; encouraged new research courses, such as those examining MIT’s historical ties to slavery; and worked to expand the infrastructure in humanities, arts, and social sciences for students, including development of a new music building on campus.

Nobles also says she believes formal education at MIT is most successful when students have the opportunity to become “informed, respectful citizens” in a pluralistic campus community — one where differences are recognized and accepted on an everyday basis, as MIT community members collaborate on their ongoing work.

“Diversity of all kinds is not only to be celebrated, it’s to be respected,” Nobles says.

With Nobles leaving her SHASS position, Provost Martin Schmidt will commence the search for a new SHASS dean.

Forging a new future, understanding the past

As a scholar, Nobles has conducted comparative studies of racial and ethnic politics, producing historically grounded work with contemporary relevance. Her first book, “Shades of Citizenship: Race and the Census in Modern Politics” (Stanford University Press, 2000), examines how the development of the official census in both the U.S. and Brazil contributed to practices of racial categorization; in 2000, it won the W.E.B. Du Bois Outstanding Book Award.

Nobles has also examined retrospective justice in society. Her second book, “The Politics of Official Apologies” (Cambridge University Press, 2008), studies government apologies for past injustices in the U.S., Canada, Australia, and New Zealand in light of questions about national membership and the moral obligations of the state. Along with Jun-Hyoek Kwak, Nobles co-edited “Inherited Responsibility and Historical Reconciliation in East Asia” (Routledge, 2013), a series of essays examing national identity and public reckonings with the past. Her work has also appeared in the Annual Review of Political Science, Daedalus, American Journal of Public Health, and other edited volumes.

Her current research is focused on building a database of racial killings in the U.S. South, from 1930 to 1954, an archival project developed with the Northeastern University Law School’s Civil Rights and Restorative Justice law clinic.

Nobles earned a BA in history from Brown University in 1985, and an MA and PhD in political science from Yale University, in 1991 and 1995, respectively. She joined the MIT faculty in 1995 and has remained at the Institute ever since. Nobles has held fellowships at Boston University's Institute for Race and Social Division, and Harvard University's Radcliffe Center for Advanced Study; served on the editorial boards of the American Political Science Review, Perspectives on Politics, and Polity; and was vice president of the American Political Science Association in 2013-14.

Nobles has taught extensively at the undergraduate and graduate levels at MIT, on comparative ethnic politics and conflict, democratization, and issues of retrospective justice. Both her teaching and scholarship have helped her connect with students, understand their concerns, and recognize that MIT students are, like herself, often “driven by questions,” as she puts it.

Nobles lives in the Roxbury neighborhood of Boston, with her husband, Fritz.

Incoming Chancellor Melissa Nobles speaks with Tech reporter Srinidhi Narayanan about her academic trajectory, specific initiatives she is interested in pursuing as Chancellor and how she plans to incorporate student voice in decision-making. “In the Chancellor’s Office, we get to focus on the student experience inside and outside of the classroom, and we can help students grow into their whole selves here at MIT,” says Nobles.

Cynthia Barnhart to step down as MIT’s chancellor