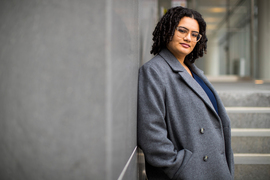 ↓ Download Image
Caption: “Don’t be afraid to ask for help and try to immerse yourself in the environment of whatever you’re trying to learn,” says senior Zaina Moussa.
Credits: Image: Adam Glanzman

Caption:
“Don’t be afraid to ask for help and try to immerse yourself in the environment of whatever you’re trying to learn,” says senior Zaina Moussa.
Credits:
Image: Adam Glanzman

At dinnertime in Zaina Moussa’s childhood home, the table would be filled with an array of Moroccan and Syrian dishes, representing her parents’ different backgrounds. A mix of French, Arabic, and English words would fill the air as Moussa’s siblings chattered, waiting for their father to join them. As her diabetic father pricked his finger to check his blood sugar, she and her siblings would shout out numbers to predict the results before the monitor.

From a young age, Moussa appreciated how accessible medical devices can empower patients. She dreamed of one day studying bioengineering to learn how to create these devices. Yet, her small high school in Lubbock, Texas, had limited engineering opportunities. When a summer engineering program at a local university opened for high-school students, Moussa jumped at the chance. Over one summer, she learned how to build an electrocardiogram out of just two pennies, shower gel, an Arduino, an LCD screen, and a speaker. “The process showed me just how accessible we can make technology to those who need it,” says Moussa.

After getting accepted to MIT, Moussa arrived to campus ready to begin pursuing her biological engineering major. However, she quickly found herself struggling to adjust to her new environment compared to her support system back home. She joined the Black Women’s Alliance (BWA), whose weekend retreat helped her build a new family on campus. “We did a lot of workshops together that made me feel part of a sense of camaraderie,” she says. “I’ve been part of the organization ever since. I love being able to support others and to feel supported by so many amazing women.”

Moussa sought out research experiences through the Undergraduate Research Opportunities Program (UROP). She toured the lab of Institute Professor Robert Langer and became interested in a project about injectable hydrogels that can facilitate polyp removal during surgery. For the next two years, Moussa worked on the project and is now an author on two published papers on hydrogels and drug delivery.

Summer research experiences in other labs gave Moussa a chance to explore additional topics in medical research. During the summer after her sophomore year, she worked alongside a physician-scientist at the Mayo Clinic in the Department of Cardiovascular Medicine and Radiology. Although she knew little at the time about machine learning, she taught herself to develop a model to diagnose early stage cardiac amyloidosis. “I try to go into things thinking ‘let’s do this,’ even if I’m scared at first,” she says, laughing. “Google has definitely been my best friend for approaching any new challenge.”

Through this experience, Moussa also became introduced to the importance of patient input throughout the technical design process. This eventually inspired Moussa to pursue a combined MD/PhD. “The physician I shadowed would really take the time with each patient to educate them about their diagnosis and options,” she says. “I realized I don’t want to do research without also knowing the patient’s perspective. Since then, I’ve been interested in an MD/PhD track to combine both of my interests.”

Understanding the person behind a medical treatment has continued to be a key interest of Moussa’s. Her favorite course, WGS.S10 (Black Feminist Health Science Studies), is about the medicalization of race and the health of marginalized groups. “It also got me thinking about how we often put the blame on the patient. For example, we’ve seen the lowest rates of Covid-19 vaccination in Black and Brown communities,” explains Moussa. “We need to look towards our institutions for why this might be, not just blame the patient for vaccine hesitancy.”

“I think that’s why the intersection of engineering and humanities is so important to bringing the human back into engineering,” she says. “We need to meld these two spheres together if we’re going to make technologies that better serve our communities.”

Moussa also enjoys understanding people better by learning new languages. In addition to the three languages of her household, Moussa has taught herself Spanish and Portuguese. She also has a minor in Japanese, which she first pursued out of her love for anime. “It’s always been about the people for me, and I find that studying languages helps open up the world. By understanding a person’s language, you can begin to better understand their values and culture,” she says.

In her free time, Moussa enjoys mentoring other pre-med students through the Minority Association of Pre-Medical Students. Whenever worried students approach her about grades, she shares the advice she has gained from self studying languages. “Learning new topics is similar to learning a new language. You can’t get embarrassed, because if do, you’re not going to learn as much,” Moussa explains. “Don’t be afraid to ask for help and try to immerse yourself in the environment of whatever you’re trying to learn.”

This fall, Moussa will begin pursuing her MD/PhD in bioengineering. She hopes to use her daily conversations with patients to create technologies that meet their needs. “I’m excited to see what the future holds and I’m very open-minded. Three years ago, I wasn’t even thinking about being a physician. It’s amazing to look back and see how much I’ve changed,” she says.

“I used to face this mental gymnastics between my different interests and cultures. I still get in my head sometimes, but for the most part, I now embrace that I am both Black and Middle Eastern. Both a physician and a scientist. That’s just me,” Moussa says.

“My new perspective is that there’s just not enough time to be invalidating yourself or worrying what other people think. Just ask questions and go for it! You’ve got this.”