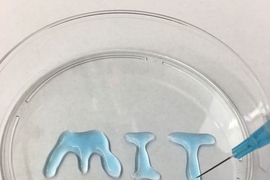 ↓ Download Image
Caption: MIT researchers have developed a material that can be injected as a liquid then turn into a solid gel. They believe it holds promise for improving colonoscopies, in which saline is currently injected below precancerous growths to make them easier to remove.
Credits: Image: Courtesy of the researchers

Caption:
MIT researchers have developed a material that can be injected as a liquid then turn into a solid gel. They believe it holds promise for improving colonoscopies, in which saline is currently injected below precancerous growths to make them easier to remove.
Credits:
Image: Courtesy of the researchers

More than 15 million colonoscopies are performed in the United States every year, and in at least 20 percent of those, gastroenterologists end up removing precancerous growths from the colon. Eliminating these early-stage lesions, known as polyps, is the best way to prevent colon cancer from developing.

To reduce the risk of tearing the colon during this procedure, doctors often inject a saline solution into the space below the lesion, forming a “cushion” that lifts the polyp so that it’s easier to remove safely. However, this cushion doesn’t last long.

MIT researchers have now devised an alternative — a solution that can be injected as a liquid but turns into a solid gel once it reaches the tissue, creating a more stable and longer-lasting cushion.

“That really makes a huge difference to the gastroenterologist who is performing the procedure, to ensure that there’s a stable area that they can then resect using endoscopic tools,” says Giovanni Traverso, an assistant professor in MIT’s Department of Mechanical Engineering and a gastroenterologist at Brigham and Women’s Hospital.

While many colon polyps are harmless, some can eventually become cancerous if not removed. Gastroenterologists often perform this procedure during a routine colonoscopy, using a lasso-like tool to snare the tissue before cutting it off.

This procedure carries some risk of tearing the lining of the colon, which is why doctors usually inject saline into the area just below the lining, called the submucosal space, to lift the polyp away from the surface of the colon.

“What that does is separate those tissue layers briefly, and it gives one a little bit of a raised area so it’s easier to snare the lesion,” Traverso says. “The challenge is that saline dissipates very quickly, so we don’t always have enough time to go in and intervene, and may need to reinject saline.”

Complex lesions can take 10 to 20 minutes to remove, or even longer, but the saline cushion only lasts for a few minutes. Researchers have tried to make the cushions longer-lived by adding thickening agents such as gelatin and cellulose, but those are very difficult to inject through the narrow needle that is used for the procedure.

To overcome that, the MIT team decided to create a shear-thinning gel. These materials are semisolid gels under normal conditions, but when force is applied to them, their viscosity decreases and they flow more easily. This means that the material can be easily injected through a narrow needle, then turn back into a solid gel once it exits into the colon tissue.

Shear-thinning gels can be made from many different types of materials. For this purpose, the researchers decided on a combination of two biocompatible materials that can form gels — Laponite, a powdery clay used in cosmetics and other products, and alginate, a polysaccharide derived from algae.

“We chose these materials because they are biocompatible and they allow us to tune the flowing behavior of the resulting gels,” Pang says.

Using these materials, the researchers created a shear-thinning gel that could be injected and form a stable cushion for more than an hour, in pigs. This would give gastroenterologists much more time to remove any polyps.

“Otherwise, you inject the saline, then you change tools, and by the time you’re ready the tissue is kind of flat again. It becomes really difficult to resect things safely,” Traverso says.

This approach could offer “an elegant solution” to the problem of keeping lesions elevated during a surgical removal, says Jay Pasricha, a professor of medicine and neuroscience at Johns Hopkins School of Medicine.

“It’s a growing unmet need,” says Pasricha, who was not involved in the research. “In the last decade, we’ve shifted toward trying to resect more complex tumors from the colon endoscopically, rather than through traditional forms of surgery. It would be great to have a material that can last throughout the duration of the procedure.”

By varying the composition of the gel components, the researchers can control features such as the viscosity, which influences how long the cushion remains stable. If made to last longer, this kind of injectable gel could be useful for applications such as narrowing the GI tract, which could be used to prevent acid reflux or to help with weight loss by making people feel full. It could also potentially be used to deliver drugs to the intestinal tract, Traverso says.

The researchers also found that the material had no harmful side effects in pigs, and they hope to begin trials in human patients within the next three to five years.

“This is something we think can get into patients fairly quickly,” Traverso says. “We’re really excited about moving it forward.”

The research was funded by the National Institutes of Health, the Alexander von Humboldt Foundation, the Division of Gastroenterology at Brigham and Women’s Hospital and the MIT Department of Mechanical Engineering.