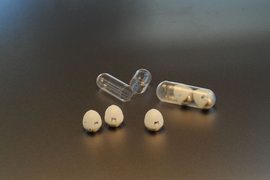 ↓ Download Image
Caption: An MIT-led research team has developed a drug capsule that could be used to deliver oral doses of insulin.
Credits: Image: Felice Frankel

Caption:
An MIT-led research team has developed a drug capsule that could be used to deliver oral doses of insulin.
Credits:
Image: Felice Frankel

An MIT-led research team has developed a drug capsule that could be used to deliver oral doses of insulin, potentially replacing the injections that people with type 1 diabetes have to give themselves every day.

About the size of a blueberry, the capsule contains a small needle made of compressed insulin, which is injected after the capsule reaches the stomach. In tests in animals, the researchers showed that they could deliver enough insulin to lower blood sugar to levels comparable to those produced by injections given through skin. They also demonstrated that the device can be adapted to deliver other protein drugs.

“We are really hopeful that this new type of capsule could someday help diabetic patients and perhaps anyone who requires therapies that can now only be given by injection or infusion,” says Robert Langer, the David H. Koch Institute Professor, a member of MIT’s Koch Institute for Integrative Cancer Research, and one of the senior authors of the study.

Giovanni Traverso, an assistant professor at Brigham and Women’s Hospital, Harvard Medical School, and a visiting scientist in MIT’s Department of Mechanical Engineering, where he is starting as a faculty member in 2019, is also a senior author of the study. The first author of the paper, which appears in the Feb. 7 issue of Science, is MIT graduate student Alex Abramson. The research team also includes scientists from the pharmaceutical company Novo Nordisk. 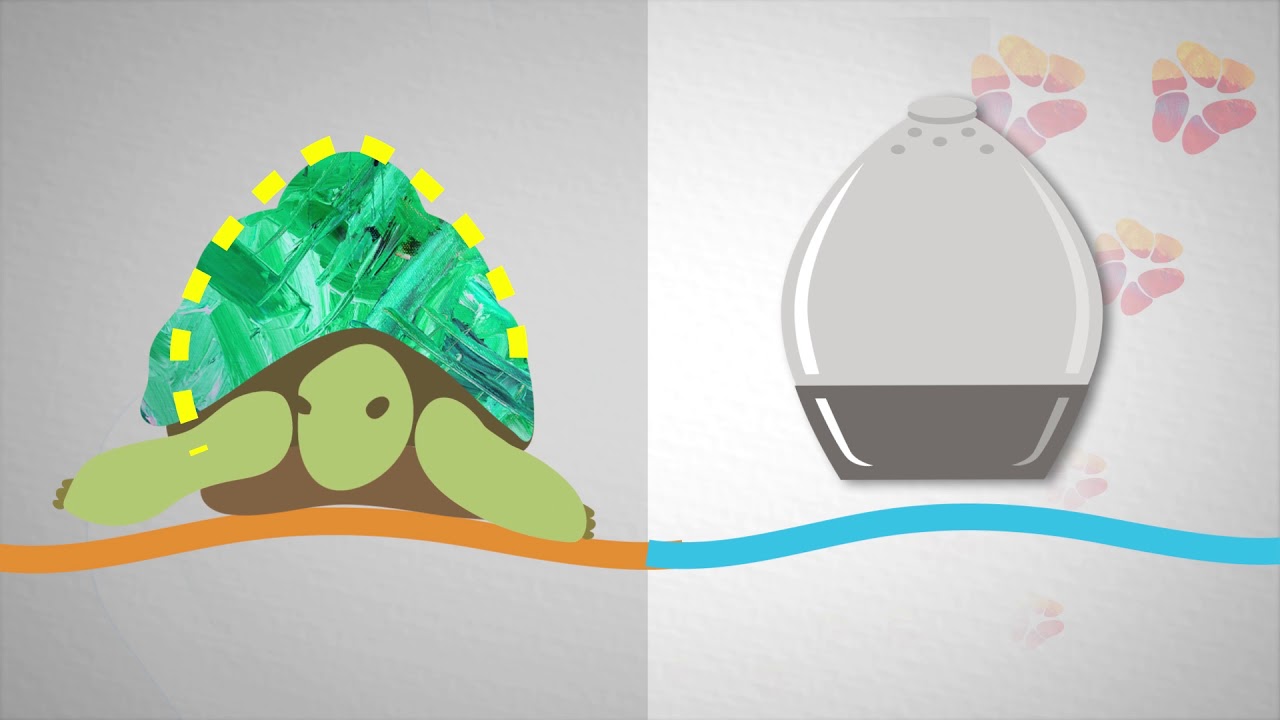 Several years ago, Traverso, Langer, and their colleagues developed a pill coated with many tiny needles that could be used to inject drugs into the lining of the stomach or the small intestine. For the new capsule, the researchers changed the design to have just one needle, allowing them to avoid injecting drugs into the interior of the stomach, where they would be broken down by stomach acids before having any effect.

The tip of the needle is made of nearly 100 percent compressed, freeze-dried insulin, using the same process used to form tablets of medicine. The shaft of the needle, which does not enter the stomach wall, is made from another biodegradable material.

Within the capsule, the needle is attached to a compressed spring that is held in place by a disk made of sugar. When the capsule is swallowed, water in the stomach dissolves the sugar disk, releasing the spring and injecting the needle into the stomach wall.

“As soon as you take it, you want the system to self-right so that you can ensure contact with the tissue,” Traverso says.

The researchers drew their inspiration for the self-orientation feature from a tortoise known as the leopard tortoise. This tortoise, which is found in Africa, has a shell with a high, steep dome, allowing it to right itself if it rolls onto its back. The researchers used computer modeling to come up with a variant of this shape for their capsule, which allows it to reorient itself even in the dynamic environment of the stomach.

“What’s important is that we have the needle in contact with the tissue when it is injected,” Abramson says. “Also, if a person were to move around or the stomach were to growl, the device would not move from its preferred orientation.”

Once the tip of the needle is injected into the stomach wall, the insulin dissolves at a rate that can be controlled by the researchers as the capsule is prepared. In this study, it took about an hour for all of the insulin to be fully released into the bloodstream.

In tests in pigs, the researchers showed that they could successfully deliver up to 300 micrograms of insulin. More recently, they have been able to increase the dose to 5 milligrams, which is comparable to the amount that a patient with type 1 diabetes would need to inject.

After the capsule releases its contents, it can pass harmlessly through the digestive system. The researchers found no adverse effects from the capsule, which is made from biodegradable polymer and stainless steel components.

Maria José Alonso, a professor of biopharmaceutics and pharmaceutical technology at the University of Santiago de Compostela in Spain, describes the new capsule as a “radically new technology” that could benefit many patients.

“We are not talking about incremental improvements in insulin absorption, which is what most researchers in the field have done so far. This is by far the most realistic and impactful breakthrough technology disclosed until now for oral peptide delivery,” says Alonso, who was not involved in the research.

The MIT team is now continuing to work with Novo Nordisk to further develop the technology and optimize the manufacturing process for the capsules. They believe this type of drug delivery could be useful for any protein drug that normally has to be injected, such as immunosuppressants used to treat rheumatoid arthritis or inflammatory bowel disease. It may also work for nucleic acids such as DNA and RNA.

“Our motivation is to make it easier for patients to take medication, particularly medications that require an injection,” Traverso says. “The classic one is insulin, but there are many others.”

MIT researchers have developed a pill that could potentially deliver insulin, which the BBC’s Adrienne Bernhard describes as “a kind of edible Swiss Army knife that can deliver life-saving medicine without the pain of needle injection.”

NIH Director Francis Collins highlights how MIT researchers have developed a new ingestible device, shaped like the shell of an African leopard tortoise, that can inject insulin directly into the stomach wall. Collins writes that, “this fascinating work serves as a reminder that when it comes to biomedical science, inspiration sometimes can come from the most unexpected places.”

MIT researchers have developed a new ingestible capsule that in the future could be used to deliver medication to diabetes patients, reports Dr. Erica Orsini for ABC News. “The oral route is preferred by both patients and health care providers,” explains visiting scientist Giovanni Traverso.

Scientific American reporter Knvul Sheikh highlights how two teams of MIT researchers have developed ingestible devices that could assist with medication adherence. “Many patients delay therapy because it requires an injection,” explains visiting scientist Giovanni Traverso. “Delivering these medicines orally can have a tremendous impact.”

Associated Press reporter Lauran Neergaard writes that MIT researchers have created a pea-sized pill that, once swallowed, can deliver medications such as insulin directly to the stomach. “The way this works is it travels down the esophagus in seconds, it’s in the stomach within a few minutes, and then you get the drug,” explains visiting scientist Giovanni Traverso.

Financial Times reporter Clive Cookson writes that MIT researchers have developed an ingestible pill that can deliver insulin directly to a patient’s stomach. “This discovery has the potential to transform not only drug delivery but drug discovery as well,” explains Prof. Robert Langer, “since most current drug discovery efforts are aimed at creating small molecule drugs that patients can take orally.”

A team of MIT researchers has created a tiny ingestible device that deliver medications such as insulin directly to the stomach and could replace the daily injections used to treat diabetes patients, reports Alice Park for TIME. “We see no reason why someday this couldn’t be used to deliver any protein to the body,” says Prof. Robert Langer.

Wired reporter Megan Molteni writes that MIT researchers have developed an ingestible capsule that could be used to deliver insulin to diabetes patients. The researchers were inspired by the leopard tortoise to create a self-orienting device that can position itself to deliver medication directly into the stomach. “The result was a roly-poly-pill that autonomously rights itself to be needle-down,” Molteni explains.

A new ingestible pill developed by MIT researchers positions itself against the walls of the stomach and can deliver insulin directly to the bloodstream, reports Gina Kolata for The New York Times. “It’s a very new concept and a really cool idea,” says Edith Mathiowitz, a professor of medical science and engineering at Brown University.

Inspired by the shell of a leopard tortoise, MIT researchers have developed a self-orienting ingestible capsule that can deliver doses of medication to the stomach, writes Megan Thielking for STAT. “If we’re able to deliver large molecules orally, it would not only change drug delivery but also drug discovery,” says Prof. Robert Langer.

MIT researchers have developed a new ingestible capsule that can release insulin directly into the stomach and could be used to treat type 2 diabetes, reports Joe Palca for NPR. "We chose the stomach as the site of delivery because we recognized that the stomach is a thick and robust part of the GI tract," explains visiting scientist Giovanni Traverso.