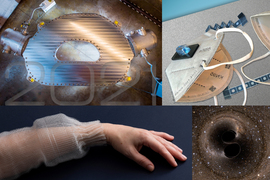 Despite the pandemic’s disruptions, MIT’s research community still found a way to generate a number of impressive research breakthroughs in 2021. In the spirit of reflection that comes with every new orbit around the sun, below we count down 10 of the most-viewed research stories on MIT News from the past year.

10. Giving cancer treatment a recharge. In October, researchers discovered a way to jump-start the immune system to attack tumors. The method combines chemotherapy and immunotherapy to spur immune cells into action. The researchers hope it could allow immunotherapy to be used against more types of cancer.

9. Generating 3D holograms in real-time. Computer scientists developed a deep-learning-based system that allows computers to create holograms almost instantly. The system could be used to create holograms for virtual reality, 3D printing, medical imaging, and more — and it’s efficient enough to run on a smartphone.

8. Creating inhalable vaccines. Scientists at the Koch Institute developed a method for delivering vaccines directly to the lungs through inhalation. The new strategy induced a strong immune response in the lungs of mice and could offer a quicker response to viruses that infect hosts through mucosal surfaces.

7. Assessing Covid-19 transmission risk. Two MIT professors proposed a new approach to estimating the risks of exposure to Covid-19 in different indoor settings. The guidelines suggest a limit for exposure based on factors such as the size of the space, the number of people, the kinds of activity, whether masks are worn, and ventilation and filtration rates.

6. Teaching machine learning models to adapt. Researchers in CSAIL developed a new type of neural network that can change its underlying equations to continuously adapt to new data. The advance could improve models’ decision-making based on data that changes over time, such as in medical diagnosis and autonomous driving.

5. Programming fibers. In June, a team created the first fabric fiber with digital capabilities. The fibers can sense, store, analyze, and infer data and activity after being sewn into a shirt. The researchers say the fibers could be used to monitor physical performance, to detect diseases, and for a variety of medical purposes.

4. Examining the limitations of data visualizations. A collaboration between anthropologists and computer scientists found that coronavirus skeptics have used sophisticated data visualizations to argue against public health orthodoxy like wearing a mask. The researchers concluded that data visualizations aren’t sufficient to convey the urgency of the Covid-19 pandemic because even the clearest graphs can be interpreted through a variety of belief systems.

3. Developing a Covid-detecting face mask. Engineers at MIT and Harvard University designed a prototype face mask that can diagnose the person wearing the mask with Covid-19 in about 90 minutes. The masks are embedded with tiny, disposable sensors that can be fitted into other face masks and could also be adapted to detect other viruses.

2. Confirming Hawking’s black hole theorem. Using observations of gravitational waves, physicists from MIT and elsewhere confirmed a major theorem created by Stephen Hawking in 1971. The theorem states that the area of a black hole’s event horizon — the boundary beyond which nothing can ever escape — will never shrink.

1. Advancing toward fusion energy. In September, researchers at MIT and the MIT spinout Commonwealth Fusion Systems ramped up a high-temperature superconducting electromagnet to a field strength of 20 tesla, the most powerful magnetic field of its kind ever created on Earth. The demonstration was three years in the making and is believed to resolve one of greatest remaining points of uncertainty in the quest to build the world’s first fusion power plant that produces more energy than it consumes.