The physicist and the hospital 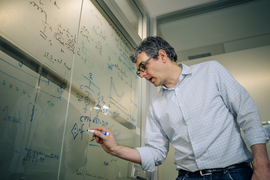 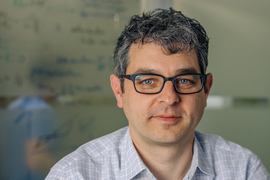 ↓ Download Image
Caption: Now it’s Heldt’s turn to play the mentor. “I think my proudest achievement is the students I work with,” he says.
Credits: Image: Lillie Paquette

But there is a through line: Heldt operates at the intersection of physics and medicine, where fundamental physical principles intersect with human health. And through his varied career, Heldt has been grateful for the mentorship he’s received from scientists and doctors alike.

Heldt’s love of physics came first. He grew up in Neuwied, Germany, not too far from the French border. By middle school, Heldt says “it was clear to me that my career preference would be in math and physics.” For that he credits his teachers, who piqued his curiosity through hands-on tabletop experiments in the classroom. He followed that curiosity to college at Johannes Gutenberg University in Mainz, Germany. Selecting his major was a no-brainer. “Physics was it,” says Heldt. “There was no doubt in my mind.”

But once at university, Heldt had trouble specializing. He was equally enthralled by elementary particle physics and by astrophysics: “The two extremes,” he says, “the very small scale and the very large scale.” Ultimately, Heldt found inspiration in a completely different field: medicine. After sitting in on some cardiology lectures and taking an anatomy class, “I was really fascinated by how the heart forms,” he says. “During embryogenesis it starts as a long tube, then it differentially folds on top of itself, and then certain walls disappear while other walls appear, and” — voila!  — “you have the four chambers of the heart. That was really cool.” Heldt added medicine as a second major.

While still an undergraduate, Heldt landed an internship observing pediatric heart surgery. He would stand on a pedestal, peering right over the surgeon’s shoulder. “These were some very intense procedures — six-hour procedures. One condition for being allowed into the operating room was that I’d come prepared.” Heldt would read up on the cases beforehand, and the surgeon would occasionally quiz Heldt as he worked. Heldt also took note of the rest of the operating room. “You have all this technology around,” he says, “such as bedside monitors, so you talk about pressure and flows and the electrical activity of the heart. It was fantastic.”

One day Heldt arrived for an observation. The surgeon didn’t notice him at first, but soon turned around and said, “Oh, I didn’t know you were here. We’re one [assistant] short. You have to come to the operating table.” Suddenly, Heldt found himself holding the incision open with retractors and suctioning blood away from the operation site. Though the experience didn’t make Heldt want to become a surgeon, being in the operating room — surrounded by monitors and other machinery — was an inspiration. “That hooked me on the intersection of physics and medicine,” he says. “I knew that’s where I wanted to go.”

After earning master’s degrees in physics from Yale University, Heldt arrived at MIT to pursue a PhD in medical physics through the Harvard-MIT Program in Health Sciences and Technology. He researched the cardiovascular response to microgravity, aiming to pinpoint why astronauts tended to faint upon returning from space. He developed a mathematical model of the cardiovascular system and compared it to data collected from actual astronauts. Heldt enjoyed working with a team that included both doctors and scientists interested in basic research. “It was really intellectually stimulating,” he says.

After finishing his PhD, he was looking for another opportunity to use data and computers to improve health outcomes. “So, I asked, ‘Where do you have a lot of data streams from patients’ physiology?’ And that’s in intensive care,” he says.

Heldt stayed at MIT, first as a postdoc, next as a research scientist at the Research Laboratory of Electronics. In 2013, he became a faculty member in EECS and the newly formed Institute for Medical Engineering and Science. His research focus has shifted from the heart to the brain.

“We’re trying to understand the physiology of the injured brain,” says Heldt. “The core mission of the lab is to work with anesthesiologists, neurologists, neurosurgeons, and neurointensivists, our collaborators, to help measure the health of the brain and help clinicians take better care of patients who have neurological conditions.”

At first, Heldt’s neurological research aimed at better understanding brain development in premature infants, who have a higher likelihood of brain injury than full-term infants. He collected and analyzed data to find out why premature infants suffered this risk, and how to reduce it. “If you can figure out some of these mechanisms, could you prevent some of this brain injury?” he muses.

Heldt’s group also uses neurological data from older patients to work on the longstanding challenge of measuring intracranial pressure noninvasively. Brain injuries and certain illnesses can cause swelling in the brain, a dangerous situation that can lead to long-term damage or even death. But current techniques for monitoring brain swelling are themselves invasive and risky, requiring a hole drilled into the skull for catheter insertion. So, the procedure is generally reserved for the highest-risk patients.

Heldt is developing a model-based approach to monitoring intracranial pressure (ICP) that could allow ICP to be estimated more safely. With collaborators at Harvard, Boston Children’s Hospital, Boston Medical Center, and Beth-Israel Deaconess Medical Center, he is working on a model of ICP that relies on two data streams: ultrasound measurements of cerebral blood flow and continuous measurements of blood pressure.

One day, noninvasive ICP monitoring could be used on a wider variety of patients, not just those at the highest risk. For example, it could help doctors determine whether a patient who arrives to the ER unresponsive has had a traumatic brain injury or is inebriated — two possibilities that would warrant different treatment courses. While the technology is still emerging, “the results so far are very promising,” says Heldt, who has related projects focusing on cerebral perfusion and embolic load monitoring. “We’re at the cusp of developing a suite of algorithms and technologies that will allow us to monitor the brain much better.”

It's been a winding career path for Heldt. But it’s worked out, largely thanks to fantastic mentors along the way, he says. “I’m very thankful that when these bifurcations and decision points were made, there was always been someone who nudged me in one direction with a remarkable lack of self-interest,” he says.

Now it’s Heldt’s turn to play the mentor. “I think my proudest achievement is the students I work with,” he says. “Seeing them succeed and find their own niche — to the extent that I may have played a small part in that is a very satisfying feeling.”

A much less invasive way to monitor pressure in the brain

Finding a noninvasive way to measure pressure in the brain