The boiling new world, which zips around its star at ultraclose range, is among the lightest exoplanets found to date.
Jennifer Chu | MIT News Office
Publication Date:
Press Inquiries 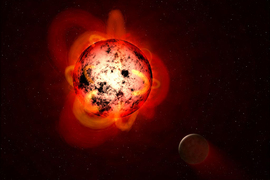 Ultra-short-period planets are small, compact worlds that whip around their stars at close range, completing an orbit — and a single, scorching year — in less than 24 hours. How these planets came to be in such extreme configurations is one of the continuing mysteries of exoplanetary science.

Now, astronomers have discovered an ultra-short-period planet (USP) that is also super light. The planet is named GJ 367 b, and it orbits its star in just eight hours. The planet is about the size of Mars, and half as massive as the Earth, making it one of the lightest planets discovered to date.

Orbiting a nearby star that is 31 light years from our own sun, GJ 367 b is close enough that researchers could pin down properties of the planet that were not possible with previously detected USPs. For instance, the team determined that GJ 376 b is a rocky planet and likely contains a solid core of iron and nickel, similar to Mercury’s interior.

Due to its extreme proximity to its star, the astronomers estimate GJ 376 b is blasted with 500 times more radiation than what the Earth receives from the sun. As a result, the planet’s dayside boils at up to 1,500 degrees Celsius. Under such extreme temperatures, any substantial atmosphere would have long vaporized away, along with any signs of life, at least as we know it.

But there is a chance that the planet has habitable partners. Its star is a red dwarf, or M dwarf — a type of star that typically hosts multiple planets. The discovery of GJ 367 b around such a star points to the possibility for more planets in this system, which could help scientists understand the origins of GJ 376 b and other ultra-short-period planets.

“For this class of star, the habitable zone would be somewhere near a month-long orbit,” says team member George Ricker, senior research scientist in MIT’s Kavli Institute for Astrophysics and Space Research. “Since this star is so close by, and so bright, we have a good chance of seeing other planets in this system. It’s like there’s a sign saying, ‘Look here for extra planets!’”

The team’s results appear today in the journal Science. The study was led by researchers from the Institute of Planetary Research at the German Aerospace Center, in collaboration with an international group of researchers, including MIT co-authors Ricker, Roland Vanderspek, and Sara Seager.

The new planet was discovered by NASA’s Transiting Exoplanet Survey Satellite (TESS), an MIT-led mission, of which Ricker is principal investigator. TESS monitors the sky for changes in brightness of the nearest stars. Scientists look through TESS data for transits, or periodic dips in starlight that indicate a planet is crossing and briefly blocking a star’s light.

For about a month in 2019, TESS recorded a patch of the southern sky that included the star GJ 376. Scientists at MIT and elsewhere analyzed the data, and detected a transiting object with an ultra-short, eight-hour orbit. They ran several tests to make sure the signal was not from a “false positive” source such as a foreground or background eclipsing binary star.

After confirming the object was indeed an ultra-short-period planet, they then observed the planet’s star more closely, using the High Accuracy Radial Velocity Planet Searcher (HARPS), an instrument installed on the European Southern Observatory’s telescope in Chile.

From these measurements, they determined the planet to be among the lightest planets discovered to date, with a radius that is 72 percent, and a mass that is 55 percent, that of Earth’s. Such dimensions indicate that the planet likely has an iron-rich core.

“We’re finding a Mars-sized planet that has the composition of Mercury,” says Vanderspek, principal research scientist at MIT. “It’s among the smallest planets detected to date, and it’s spinning around an M dwarf on a very tight orbit.”

As scientists continue to study GJ 367 b and its star, they hope to detect signals of other planets in the system. The properties of these planets — such as their spacing and orbital orientation — could provide clues to how GJ 367 b and other ultra-short-period planets came to be.

“Understanding how these planets get so close to their host stars is a bit of a detective story,” says TESS team member Natalia Guerrero. “Why is this planet missing its outer atmosphere? How did it move close in? Was this process peaceful or violent? Hopefully this system will give us a little more insight.”

This research was supported in part by NASA.

CNN reporter Ashley Strickland writes that NASA’s Transiting Exoplanet Survey Satellite (TESS), an MIT-led mission, has discovered an exoplanet approximately the size of Mars where a year lasts for about eight hours. “Astronomers are eager to learn more about these small planets that quickly spin around their stars in less than 24 hours because they are not sure how they form and end up in such an extreme orbit,” writes Strickland.

Research updates from TESS: Hunting for worlds beyond our solar system