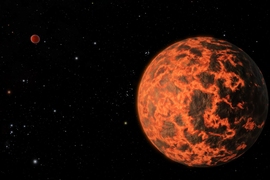 ↓ Download Image
Caption: In our solar system, the “ice giants” Neptune and Uranus are far less dense than rocky Venus and Earth. But astrophysicists on NASA’s TESS mission have now found an exoplanet, TOI-849b, that appears to be 40 times more massive than Earth, yet just as dense. This illustration depicts the exoplanet, UCF-1.01. Like TOI-849b, this exoplanet also orbits close to a star and is like “hot Neptune.”
Credits: Image credit: NASA/JPL-Caltech

Caption:
In our solar system, the “ice giants” Neptune and Uranus are far less dense than rocky Venus and Earth. But astrophysicists on NASA’s TESS mission have now found an exoplanet, TOI-849b, that appears to be 40 times more massive than Earth, yet just as dense. This illustration depicts the exoplanet, UCF-1.01. Like TOI-849b, this exoplanet also orbits close to a star and is like “hot Neptune.”
Credits:
Image credit: NASA/JPL-Caltech

The “ice giant” planets Neptune and Uranus are much less dense than rocky, terrestrial planets such as Venus and Earth. Beyond our solar system, many other Neptune-sized planets, orbiting distant stars, appear to be similarly low in density.

Now, a new planet discovered by NASA’s Transiting Exoplanet Survey Satellite, TESS, seems to buck this trend. The planet, named TOI-849 b, is the 749th “TESS Object of Interest” identified to date. Scientists spotted the planet circling a star about 750 light years away every 18 hours, and estimate it is about 3.5 times larger than Earth, making it a Neptune-sized planet. Surprisingly, this far-flung Neptune appears to be 40 times more massive than Earth and just as dense.

TOI-849 b is the most massive Neptune-sized planet discovered to date, and the first to have a density that is comparable to Earth.

“This new planet is more than twice as massive as our own Neptune, which is really unusual,” says Chelsea Huang, a postdoc in MIT’s Kavli Institute for Astrophysics and Space Research, and a member of the TESS science team. “Imagine if you had a planet with Earth’s average density, built up to 40 times the Earth’s mass. It’s quite crazy to think what’s happening at the center of a planet with that kind of pressure.”

The discovery is reported today in the journal Nature. The study’s authors include Huang and members of the TESS science team at MIT.

Since its launch on April 18, 2018, the TESS satellite has been scanning the skies for planets beyond our solar system. The project is one of NASA’s Astrophysics Explorer missions and is led and operated by MIT. TESS is designed to survey almost the entire sky by pivoting its view every month to focus on a different patch of the sky as it orbits the Earth. As it scans the sky, TESS monitors the light from the brightest, nearest stars, and scientists look for periodic dips in starlight that may signal that a planet is crossing in front of a star.

Data taken by TESS, in the form of a star’s light curve, or measurements of brightness, is first made available to the TESS science team, an international, multi-institute group of researchers led by scientists at MIT. These researchers get a first look at the data to identify promising planet candidates, or TESS Objects of Interest. These are shared publicly with the general scientific community along with the TESS data for further analysis.

For the most part, astronomers focus their search for planets on the nearest, brightest stars that TESS has observed. Huang and her team at MIT, however, recently had some extra time to look over data during September and October of 2018, and wondered if anything could be found among the fainter stars. Sure enough, they discovered a significant number of transit-like dips from a star 750 light years away, and soon after, confirmed the existence of TOI-849 b.

“Stars like this usually don’t get looked at carefully by our team, so this discovery was a happy coincidence,” Huang says.

Follow-up observations of the faint star with a number of ground-based telescopes further confirmed the planet and also helped to determine its mass and density.

“We’re really puzzled about how this planet formed,” Huang says. “All the current theories don’t fully explain why it’s so massive at its current location. We don’t expect planets to grow to 40 Earth masses and then just stop there. Instead, it should just keep growing, and end up being a gas giant, like a hot Jupiter, at several hundreds of Earth masses.”

One hypothesis scientists have come up with to explain the new planet’s mass and density is that perhaps it was once a much larger gas giant, similar to Jupiter and Saturn — planets with more massive envelopes of gas that enshroud cores thought to be as dense as the Earth.

As the TESS team proposes in the new study, over time, much of the planet’s gassy envelope may have been blasted away by the star’s radiation — not an unlikely scenario, as TOI-849 b orbits extremely close to its host star. Its orbital period is just 0.765 days, or just over 18 hours, which exposes the planet to about 2,000 times the solar radiation that Earth receives from the sun. According to this model, the Neptune-sized planet that TESS discovered may be the remnant core of a much more massive, Jupiter-sized giant.

“If this scenario is true, TOI-849 b is the only remnant planet core, and the largest gas giant core known to exist,” says Huang. “This is something that gets scientists really excited, because previous theories can’t explain this planet.”

Computing and the search for new planets