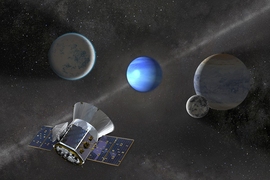 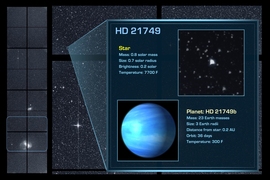 ↓ Download Image
Caption: Using the first three months of publicly available data from NASA’s TESS mission, scientists at MIT and elsewhere have confirmed a new planet, HD 21749b — the third small planet that TESS has so far discovered. HD 21749b orbits a star, about the size of the sun, 53 light years away.
Credits: Image: NASA/MIT/TESS

Caption:
Using the first three months of publicly available data from NASA’s TESS mission, scientists at MIT and elsewhere have confirmed a new planet, HD 21749b — the third small planet that TESS has so far discovered. HD 21749b orbits a star, about the size of the sun, 53 light years away.
Credits:
Image: NASA/MIT/TESS

The new planet, named HD 21749b, orbits a bright, nearby dwarf star about 53 light years away, in the constellation Reticulum, and appears to have the longest orbital period of the three planets so far identified by TESS. HD 21749b journeys around its star in a relatively leisurely 36 days, compared to the two other planets — Pi Mensae b, a “super-Earth” with a 6.3-day orbit, and LHS 3844b, a rocky world that speeds around its star in just 11 hours. All three planets were discovered in the first three months of TESS observations.

The surface of the new planet is likely around 300 degrees Fahrenheit — relatively cool, given its proximity to its star, which is almost as bright as the sun.

“It’s the coolest small planet that we know of around such a nearby star,” says Diana Dragomir, a postdoc in MIT’s Kavli Institute for Astrophysics and Space Research, who led the new discovery. “We know a lot about atmospheres of hot planets, but because it’s very hard to find small planets that orbit farther from their stars, and are therefore cooler, we haven’t been able to learn much about these smaller, cooler planets. But here we were lucky, and caught this one, and can now study it in more detail.”

The planet is about three times the size of Earth, which puts it in the category of a “sub-Neptune.” Surprisingly, it is also a whopping 23 times as massive as the Earth. But it is unlikely that the planet is rocky and therefore habitable; it’s more likely made of gas, of a kind that is much more dense than the atmospheres of either Neptune or Uranus.

“We think this planet wouldn’t be as gaseous as Neptune or Uranus, which are mostly hydrogen and really puffy,” Dragomir says. “The planet probably has an atmosphere composed of heavy molecules, such as water."

Serendipitously, the researchers have also detected evidence of a second planet, though not yet confirmed, in the same planetary system, with a shorter, 7.8-day orbit. If it is confirmed as a planet, it could be the first Earth-sized planet discovered by TESS.

In addition to presenting their results at the AAS meeting, the researchers have submitted a paper to Astrophysical Journal Letters.

Since it launched in April 2018, TESS, an MIT-led mission, has been monitoring the sky, sector by sector, for momentary dips in the light of about 200,000 nearby stars. Such dips likely represent a planet passing in front of that star.

The satellite trains its four onboard cameras on each sector for 27 days, taking in light from the stars in that particular segment before shifting to view the next one. Over its two-year mission, TESS will survey nearly the entire sky by monitoring and piecing together overlapping slices of the night sky. The satellite will spend the first year surveying the sky in the Southern Hemisphere, before swiveling around to take in the Northern Hemisphere sky.

The mission has released to the public all the data TESS has collected so far from the first three of the 13 sectors that it will monitor in the southern sky. For their new analysis, the researchers looked through this data, collected between July 25 and Oct. 14.

Within the sector 1 data, Dragomir identified a single transit, or dip, in the light from the star HD 21749. As the satellite only collects data from a sector for 27 days, it’s difficult to identify planets with orbits longer than that time period; by the time a planet passes around again, the satellite may have shifted to view another slice of the sky.

To complicate matters, the star itself is relatively active, and Dragomir wasn’t sure if the single transit she spotted was a result of a passing planet or a blip in stellar activity. So she consulted a second dataset, collected by the High Accuracy Radial velocity Planet Searcher, or HARPS, a high-precision spectrograph installed on a large ground-based telescope in Chile, which identifies exoplanets by their gravitational tug on their host stars.

“They had looked at this star system a decade ago and never announced anything because they weren’t sure if they were looking at a planet versus the activity of the star,” Dragomir says. “But we had this one transit, and knew something was there.”

When the researchers looked through the HARPS data, they discovered a repeating signal emanating from HD 21749 every 36 days. From this, they estimated that, if they indeed had seen a transit in the TESS data from sector 1, then another transit should appear 36 days later, in data from sector 3. When that data became publicly available, a momentary glitch created a gap in the data just at the time when Dragomir expected the second transit to occur.

“Because there was an interruption in data around that time, we initially didn’t see a second transit, and were pretty disappointed,” Dragomir recalls. “But we re-extracted the data and zoomed in to look more carefully, and found what looked like the end of a transit.”

She and her colleagues compared the pattern to the first full transit they had originally discovered, and found a near perfect match — an indication that the planet passed again in front of its star, in a 36-day orbit.

“There was quite some detective work involved, and the right people were there at the right time,” Dragomir says. “But we were lucky and we caught the signals, and they were really clear.”

They also used data from the Planet Finder Spectrograph, an instrument installed on the Magellan Telescope in Chile, to further validate their findings and constrain the planet’s mass and orbit.

Once TESS has completed its two-year monitoring of the entire sky, the science team has committed to delivering information on 50 small planets less than four times the size of Earth to the astronomy community for further follow-up, either with ground-based telescopes or the future James Webb Space Telescope.

“We’ve confirmed three planets so far, and there are so many more that are just waiting for telescope and people time to be confirmed,” Dragomir says. “So it’s going really well, and TESS is already helping us to learn about the diversity of these small planets.”

TESS is a NASA Astrophysics Explorer mission led and operated by MIT in Cambridge, Massachusetts, and managed by Goddard. Additional partners include Northrop Grumman, based in Falls Church, Virginia; NASA’s Ames Research Center in California’s Silicon Valley; the Harvard-Smithsonian Center for Astrophysics in Cambridge, Massachusetts; MIT Lincoln Laboratory; and the Space Telescope Science Institute in Baltimore. More than a dozen universities, research institutes, and observatories worldwide are participants in the mission.

CNN reporter Ashley Strickland writes that NASA’s planet-hunting satellite TESS has discovered another exoplanet 53 light years away. Strickland explains that the exoplanet orbits “a bright neighboring star in the Reticulum constellation, with a 36-day orbit and a surface temperature of 300 degrees Fahrenheit.”

Verge reporter Loren Grush writes that NASA’s MIT-led TESS mission has discovered a third exoplanet. “The important thing about this system that’s especially unique is it’s near to us,” says postdoc Diana Dragomir. “What that means simply is we can study this system in detail. We can measure the mass of the planet and measure things about the star.”

NASA’s MIT-led TESS mission has discovered a new exoplanet that is about three times the size of Earth, reports Dennis Overbye for The New York Times. “There was quite some detective work involved, and the right people were there at the right time,” explains postdoctoral fellow Diana Dragomir. “But we were lucky, and we caught the signals, and they were really clear.”

NASA’s MIT-led TESS mission has discovered a new exoplanet orbiting a star 53 light years from Earth, reports Mike Wall for Space.com. The “sub-Neptune” planet is “about three times bigger than Earth, which means it's likely gaseous rather than rocky,” writes Wall.