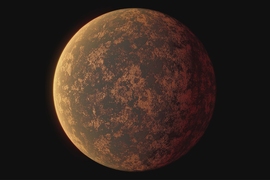 ↓ Download Image
Caption: Artist’s rendering of the surface of LHS 3844b, a planet that has been found to have no atmosphere.
Credits: Image: NASA/JPL-Caltech/R. Hurt (IPAC)

Caption:
Artist’s rendering of the surface of LHS 3844b, a planet that has been found to have no atmosphere.
Credits:
Image: NASA/JPL-Caltech/R. Hurt (IPAC)

Astronomers at MIT, Harvard University, and elsewhere have searched a rocky, Earth-sized exoplanet for signs of an atmosphere — and found none.

Atmospheres have previously been detected on planets much larger than our own, including several hot-Jupiters and sub-Neptunes, all of which are primarily made of ice and gas. But this is the first time scientists have been able to nail down whether an Earth-sized, terrestrial planet outside our solar system has an atmosphere.

The planet in question, LHS 3844b, was discovered in 2018 by NASA’s Transiting Exoplanet Survey Satellite, TESS, and was measured to be about 1.3 times larger than Earth. The planet zips around its star in just 11 hours, making it one of the fastest orbiting exoplanets known. The star itself is a small, cool M-dwarf that resides just 49 light-years from Earth.

In a paper published today in Nature, the team reports that LHS 3844b likely has neither a thick, Venus-like atmosphere nor a thin, Earth-like atmosphere. Instead, the planet is probably more similar to Mercury — a blistering, bare rock. If an atmosphere ever existed, the researchers say the star’s radiation likely blasted it away early in the planet’s formation.

“We basically found a hot planet with no gases around it,” says co-author Daniel Koll, a postdoc in MIT’s Department of Earth, Atmospheric, and Planetary Sciences. “This is the first time we’ve known anything in detail about the atmosphere of a planet around these M-dwarfs, which are the most common type of star, making LHS 3844b the most common type of rocky planet in the galaxy.”

Could any form of life manage to take hold in such a barren wasteland? Koll and his colleagues say it’s extremely unlikely, as the lack of an atmosphere would instantly cook off any organisms on the planet’s surface. But that doesn’t mean other terrestrial exoplanets are similarly without cover.

“We never thought this particular planet would be hospitable for life,” says lead author Laura Kreidberg, a researcher at the Harvard Center for Astrophysics. “It’s more a question of whether this whole category of planets around smaller stars has atmospheres or not. And our technique is a robust way of assessing whether an atmosphere is present or not.” 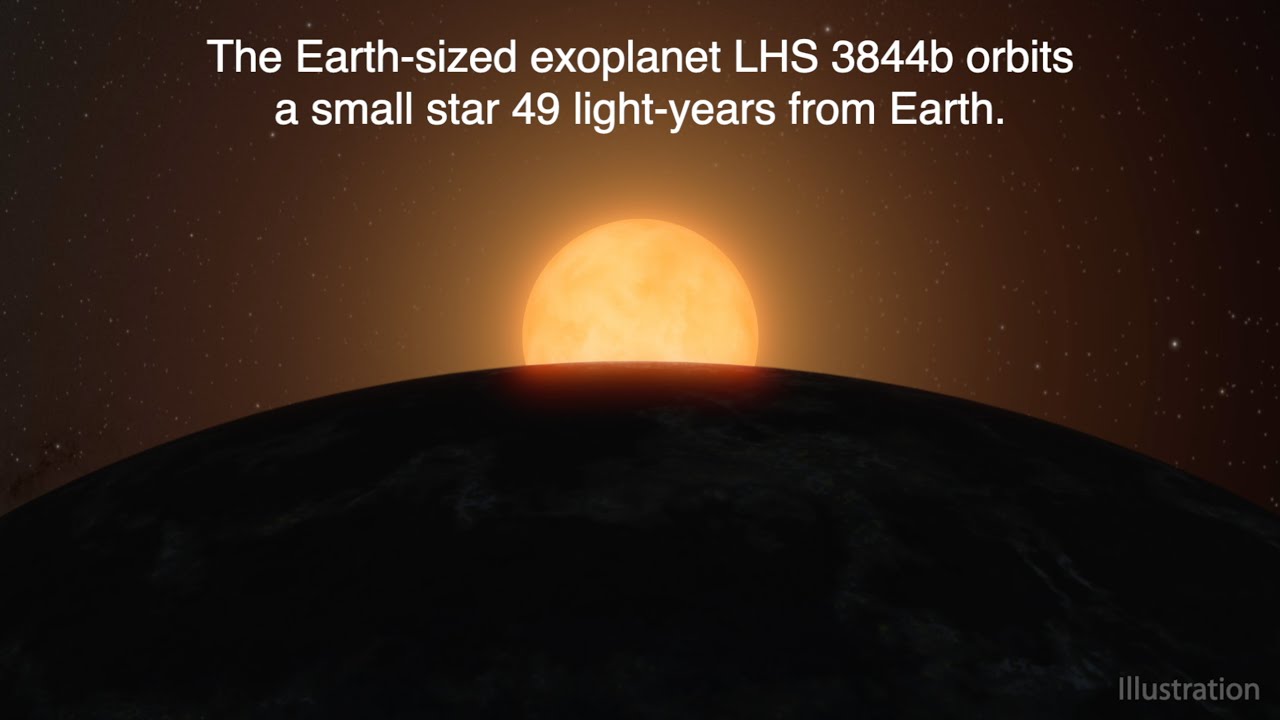 In 2018, LHS 3844b was among the first crop of extrasolar worlds confirmed by TESS, an MIT-developed satellite that monitors thousands of the closest, brightest stars, for transits — periodic dips in starlight that could signal a planet orbiting in front of the star, momentarily blocking its light.

Kreidberg and her team flagged LHS 3844b as an ideal laboratory, as its star is bright and nearby, and therefore a source against which scientists could study the planet in detail. As LHS 3844b is extremely close to its star, and thus incredibly hot, Kreidberg and Koll reasoned that it should give off enough heat to reveal clues as to whether it hosts an atmosphere.

LHS 3844b is a tidally locked planet, meaning that it has a permanent day side and night side to its star, just as the moon always shows the same face to the Earth. If an atmosphere exists, it would circulate heat around the entire planet, and the heat emitted by both the day and night sides would be roughly the same. In the absence of an atmosphere, the day side would be considerably hotter than the night side.

As the planet orbits its star, an observer can see various faces of that planet.  As it comes out from behind its star, the planet’s day side is exposed. Then, as it circles in front of the star, the planet swivels to show its night side, before coming back around to expose its day side before crossing behind the star again.

The researchers figured that if they could measure the heat given off by the planet’s various faces during its orbit, they could determine the temperature difference between the day side and night side, and ultimately, whether the planet has an atmosphere.

To test this idea, the team used NASA’s Spitzer Space Telescope, an instrument that measures infrared radiation, or heat, and pointed the telescope at LHS 3844b for 100 hours, capturing about 10 orbits of the planet in total. They measured the heat given off by the planet’s various faces throughout each orbit.

“This has been done a lot for planets closer in size to Jupiter, but this is the very first time that this measurement has ever been made for a terrestrial planet around an M dwarf star,” Koll says.

From their measurements, the researchers calculated that the dayside is a toasty 1,000 kelvins, or about 1,340 degrees Fahrenheit, whereas the nightside plummets to as low as 0 K, or -460 F. The drastic temperature difference indicates that the planet does not have a thick, Venus-like atmosphere that would distribute heat evenly around the entire planet.

The team simulated various scenarios involving thinner atmospheres of different compositions, but they found that none produced a heat distribution that matched their observations, indicating that the planet also does not host a thin, Earth-like atmosphere.

There was one scenario in which an extremely thin atmosphere, similar to that of Mars, could produce the planet’s drastic heat difference. However, the team found that it was unlikely that such a thin atmosphere could remain stable, as the star’s radiation would quickly blast away any trace gases surrounding the planet.

The researchers have concluded that LHS 3844b is essentially a super-hot, bare rock. But what type of rock could it be? In one last step, the team looked to identify its composition by measuring the reflectivity of the planet’s surface. As we know on Earth, different minerals reflect light to various degrees — basalt, which is black, solidified lava, reflects very little light, whereas lighter-colored rocks like granite, containing minerals such as quartz, have a higher reflectivity. The team measured the ratio of the star’s brightness with that of the planet’s in order to calculate the planet’s reflectivity.

“We can see a granite-like surface is ruled out by our data, whereas a dark material like a lava field in Hawaii, or the lunar mare, or like the surface of Mercury, is consistent with our observations,” Kreidberg says.

While the group concluded there is an absence of any atmosphere — and, therefore, life — on LHS 3844b, they say this may not be the case for similar terrestrial exoplanets orbiting cool M-dwarfs. They hope to apply their technique to other rocky exoplanets, including ones that are further out from their stars and have a better chance of retaining an atmosphere.

“Atmospheres help protect life and shield it from ultraviolet radiation,” Kreidberg says. “I would be thrilled to detect an atmosphere on a planet, even if it’s a little too hot or too cold, because that would tell us, yes, some terrestrial exoplanets can have atmospheres, and probably somewhere out there, there’s going to be one that’s the right temperature, that has been able to keep liquid water.”