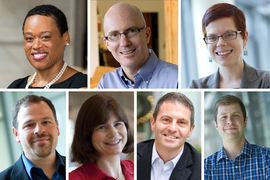 Recent months have been tumultuous for U.S. democracy, in ways that are both novel and yet also connected to conflicts seen throughout the country’s past. MIT News spoke to several of the Institute’s political scientists and historians, and asked them: What must the U.S. do to sustain the health of its democracy?

Melissa Nobles, the Kenan Sahin Dean of the School of Humanities, Arts, and Social Sciences, and professor of political science:

Americans must collectively affirm that democracy is “the only game in town,” and that we are now a multiracial democracy. To be sure, the path to full democracy has been fiercely contested. After Congress passed the 15th Amendment to the Constitution in 1870, it was another 95 years before Congress passed the Voting Rights Act in 1965, in response to the civil rights movement.

A defining feature of “Jim Crow” segregation in the U.S. South had been Black disenfranchisement. White southern politicians did not want to be accountable to Black voters or to have their political fortunes determined by them. They wanted subjects, not citizens. And many white southerners were not supportive of full political equality for their fellow Black southerners. They too did not want Black voter preferences taken into account. A healthy democracy requires equality, accommodation, mutual regard among citizens, dissent, and consent.

At this particular moment the question is not sustaining the health of American democracy, but restoring it. Illiberal elements have always been present in American society. The recent siege of the Capitol illustrates how authoritarian political entrepreneurs have succeeded in organizing these elements to attack a vision of society that tends toward inclusion and toleration. Until these movements have been effectively disrupted, democracy will continue to be threatened.

While no panacea, we need to take a look at the structure of the internet, which treats content platforms as utilities and not publishers. The world of legacy media was one in which the publishers were responsible for what ran under their banner. We at least need to ask the question of how we hold the new media magnates responsible for the content their platforms provide, especially when it threatens democracy itself.

Electoral college reform, a constitutional amendment countering the Citizens United decision, and reductions in barriers to voting would help. But these and other pro-democracy reforms are unlikely given structural barriers to change and lack of bipartisan support.

What could garner bipartisan support would be investments in the American economy and in the American worker. Populism and authoritarianism appeal, in part, because people are in economic pain. We have underinvested for years in human capital and in infrastructure, leaving many citizens and broad swaths of the country behind. We need both short-term economic relief and long-term investment to ensure ordinary Americans can earn enough to sustain themselves and their families. That will go a long way in reducing the appeal of extremist political movements.

Before the United States can sustain the health of its democracy, it first has to achieve it. Where democratic norms are fragile, they must be preserved. But institutions that have for centuries excluded Americans rather than represented them must be repaired or reimagined. In both cases, the solution is the same: more democracy.

Choosing the more democratic path is rarely easy and never finished, because, as the American pragmatist philosopher and democratic theorist John Dewey wrote in 1916, “democracy is more than a form of government; it is … a mode of associated living.” That perpetual process of deliberation will never yield national unity. But it is the only democracy that can accurately be called healthy, and the only one that can truly be sustained.

First, we need to face the forces that brought us to Jan. 6. I will be looking to colleagues who study misinformation and conspiracy theories, messaging by social and political elites, news and social media, and racism. There are lessons to be drawn from our own history (and crucial failures) at the end of Reconstruction, as well as from other countries’ experiences of democratic backsliding.

Meanwhile, we must maintain voting rights. Florida Senator Rick Scott recently called for national voter identification requirements, calling them necessary to “protect against fraud and rebuild the American people’s trust in fair outcomes” after the 2020 presidential election. He joins state legislators introducing similar “confidence-building” measures in Georgia, Texas, and other state houses. But doubts about the results of the 2020 election were founded not on any actual evidence of fraud, but on oft-repeated lies by President Trump and other politicians.

These efforts to undermine public trust in elections were not grounded in reality, and we will not successfully head them off by making it harder or more burdensome to vote. Instead, we need as many public officials as possible, especially Republicans, to help rebuild trust in elections by explicitly rejecting false claims of election fraud and acknowledging the results of the 2020 election.

There’s been a lot of talk about how the insurrection at the Capitol demonstrates that there is something wrong with the American public. Perhaps that true, but the blame lies with our politicians.

When a candidate like Donald Trump claims the election is rigged — something he did all summer and fall before it even took place — he’s sending a strong signal to the public that something is afoot in our electoral system. That’s very dangerous for democracy. If you have a contested election, and the loser accepts the verdict with the knowledge that he or she could be the victor next time, that’s democracy at work. But it’s incredibly dangerous when a candidate asserts that whatever happens, if he doesn’t win that means the system is corrupt.

Here’s where politicians can — and must — play a role. Other leaders need to stand up and rein in misinformation. That includes not just members of the opposing party, but politicians from across the political spectrum. When one leader becomes a demagogue, others need to take action. Our leaders can choose to whip up conspiracy theories or tamp them down. We’ve seen what happens when they take the former path; to sustain our democracy, they need to forgo short-term political calculations and take the latter road.

Notwithstanding perennial calls for presidents to unify the country, politics is fundamentally about conflict. Accordingly, the most basic function of democracy is not to eliminate conflict, but to regulate it. Elections provide a transparent and nonviolent method of selecting political leaders. When healthy, democracy is a self-enforcing equilibrium. Losers accept a result because they believe the current winners will accept their future losses. However, this nonviolent regulation of conflict rests on a deeper consensus about the fairness of democratic procedures.

As the 2020 presidential election indicates, these expectations are dangerously close to unraveling in the U.S. Countering this threat requires action not only to enhance the fairness of elections but more importantly to restore popular faith in election integrity.

The Democrats’ proposed “For the People Act,” which includes electoral, districting, and campaign finance reforms, would be a major step toward achieving the first goal. But if it is perceived as merely a push for partisan advantage, it will do little to buttress non-Democrats’ faith in elections. Doing so may instead require acquiescing to Republican policy goals such as voter identification requirements. Such compromise would entail political risks and policy costs for Democrats, who view voter ID as a tool of voter suppression (which it can be). But it is unlikely that restoring all Americans’ belief in the legitimacy of U.S. elections can be accomplished without bipartisan support.