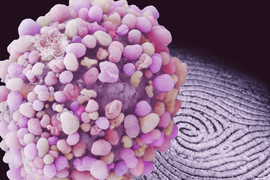 ↓ Download Image
Caption: MIT researchers have developed a way to decode images of cells to determine whether a tissue is more like a solid, liquid, or even a gas. These visual “fingerprints” may help to quickly diagnose and track various cancers.
Credits: Credit: breast cancer cell by Anne Weston, Francis Crick Institute, edited by MIT News

Caption:
MIT researchers have developed a way to decode images of cells to determine whether a tissue is more like a solid, liquid, or even a gas. These visual “fingerprints” may help to quickly diagnose and track various cancers.
Credits:
Credit: breast cancer cell by Anne Weston, Francis Crick Institute, edited by MIT News

As an organism grows, the feel of it changes too. In the initial stages, an embryo takes on an almost fluid-like state that allows its cells to divide and expand. As it matures, its tissues and organs firm up into their final form. In certain species, this physical state of an organism can be an indicator of its developmental stage, and even the general state of its health.

Now, researchers at MIT have found that the way in which a tissue’s cells are arranged can serve as a fingerprint for the tissue’s “phase.” They have developed a method to decode images of cells in a tissue to quickly determine whether that tissue is more like a solid, liquid, or even a gas. Their findings are reported this week in the Proceedings of the National Academy of Sciences.

The team hopes that their method, which they’ve dubbed “configurational fingerprinting,” can help scientists track physical changes in an embryo as it develops. More immediately, they are applying their method to study and eventually diagnose a specific type of tissue: tumors.

In cancer, there has been evidence to suggest that, like an embryo, a tumor’s physical state may indicate its stage of growth. Tumors that are more solid may be relatively stable, whereas more fluid-like growths could be more prone to mutate and metastasize.

The MIT researchers are analyzing images of tumors, both grown in the lab and biopsied from patients, to identify cellular fingerprints that indicate whether a tumor is more like a solid, liquid, or gas. They envision that doctors can one day match an image of a tumor’s cells with a cellular fingerprint to quickly determine a tumor’s phase, and ultimately a cancer’s progression.

“Our method would allow a very easy diagnosis of the states of cancer, simply by examining the positions of cells in a biopsy,” says Ming Guo, associate professor of mechanical engineering at MIT. “We hope that, by simply looking at where the cells are, doctors can directly tell if a tumor is very solid, meaning it can’t metastasize yet, or if it’s more fluid-like, and a patient is in danger.”

In a perfect solid, the material’s individual constituents are configured as an orderly lattice, such as the atoms in a cube of crystal. If you were to cut a slice of the crystal and lay it on a table, you would see that the atoms are arranged such that you could connect them in a pattern of repeating triangles. In a perfect solid, as the spacing between atoms would be exactly the same, the triangles that connect them would typically be equilateral in shape.

Guo took this construct as a template for a perfectly solid structure, with the idea that it could serve as a reference for comparing the cell configurations of actual, less-than-perfectly-solid tissues and tumors.

“Real tissues are never perfectly ordered,” Guo says. “They are mostly disordered. But still, there are subtle differences in how much they are disordered.”

Following this idea, the team started with images of various types of tissues and used software to map triangular connections between a tissue’s cells. In contrast to the equilateral triangles in a perfect solid, the maps produced triangles of various shapes and sizes, indicating cells with a range of spatial order (and disorder).

For each triangle in an image, they measured two key parameters: volumetric order, or the space within a triangle; and shear order, or how far a triangle’s shape is from equilateral. The first parameter indicates a material’s density fluctuation, while the second illustrates how prone the material is to deforming. These two parameters, they found, were enough to characterize whether a tissue was more like a solid, liquid, or gas.

“We’re directly calculating the exact value of both parameters, compared to those of a perfect solid, and using those exact values as our fingerprints,” Guo explains.

The team tested its new fingerprinting technique in several different scenarios. The first was a simulation in which they modeled the mixing of two types of molecules, the concentration of which they increased gradually. For each concentration, they mapped the molecules into triangles, then measured each triangle’s two parameters. From these measurements, they characterized the phase of the molecules and were able to reproduce the transitions between gas, liquid, and solid, that was expected.

“People know what to expect in this very simple system, and this is what we see exactly,” Guo says. “This demonstrated the capability of our method.”

The researchers then went on to apply their method in systems with cells rather than molecules. For instance, they looked at videos, taken by other researchers, of a growing fruitfly wing. Applying their method, they could identify regions in the developing wing that morphed from solid to a more fluid state.

“As a fluid, this may help with growth,” Guo says. “How exactly that happens is still under investigation.”

He and his team also grew small tumors from cells of human breast tissue and watched as the tumors grew appendage-like tendrils — signs of early metastasis. When they mapped the configuration of cells in the tumors, they found that the noninvasive tumors resembled something between a solid and a liquid, and the invasive tumors were more gas-like, while the tendrils showed an even more disordered state.

“Invasive tumors were more like vapor, and they want to spread out and go everywhere,” Guo says. “Liquids can barely be compressed. But gases are compressible — they can swell and shrink easily, and that’s what we see here.”

The team is working with samples of human cancer biopsies, which they are imaging and analyzing to hone their cellular fingerprints. Eventually, Guo envisions that mapping a tissue’s phases can be a quick and less invasive way to diagnose multiple types of cancer.

“Doctors typically have to take biopsies, then stain for different markers depending on the cancer type, to diagnose,” Guo says. “Perhaps one day we can use optical tools to look inside the body, without touching the patient, to see the position of cells, and directly tell what stage of cancer a patient is in”

This research was supported in part by the National Institutes of Health, MathWorks, and the Jeptha H. and Emily V. Wade Award at MIT.

To make mini-organs grow faster, give them a squeeze