To make mini-organs grow faster, give them a squeeze 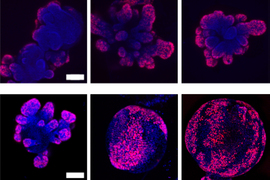 ↓ Download Image
Caption: In this image, the cell division marker Ki67 shows that the number of dividing cells in organoids increases under compression, as seen in the bottom row, during three passages.
Credits: Credit: Yiwei Li 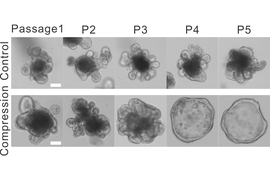 ↓ Download Image
Caption: These images show the typical morphology of intestinal organoids grown with or without compression over five passages (6 days per passage). The scale bar is 100 micrometers.
Credits: Credit: Yiwei Li

Caption:
In this image, the cell division marker Ki67 shows that the number of dividing cells in organoids increases under compression, as seen in the bottom row, during three passages.
Credits:
Credit: Yiwei Li

Caption:
These images show the typical morphology of intestinal organoids grown with or without compression over five passages (6 days per passage). The scale bar is 100 micrometers.
Credits:
Credit: Yiwei Li

The closer people are physically to one another, the higher the chance for exchange, of things like ideas, information, and even infection. Now researchers at MIT and Boston Children’s Hospital have found that, even in the microscopic environment within a single cell, physical crowding increases the chance for interactions, in a way that can significantly alter a cell’s health and development.

In a paper published today in the journal Cell Stem Cell, the researchers have shown that physically squeezing cells, and crowding their contents, can trigger cells to grow and divide faster than they normally would.

While squeezing something to make it grow may sound counterintuitive, the team has an explanation: Squeezing acts to wring water out of a cell. With less water to swim in, proteins and other cell constituents are packed closer together. And when certain proteins are brought in close proximity, they can trigger cell signaling and activate genes within the cell.

In their new study, the scientists found that squeezing intestinal cells triggered proteins to cluster along a specific signaling pathway, which can help cells maintain their stem-cell state, an undifferentiated state in which they can quickly grow and divide into more specialized cells. Ming Guo, associate professor of mechanical engineering at MIT, says that if cells can simply be squeezed to promote their “stemness,” they can then be directed to quickly build up miniature organs, such as artificial intestines or colons, which could then be used as platforms to understand organ function and test drug candidates for various diseases, and even as transplants for regenerative medicine.

To study squeezing’s effect on cells, the researchers mixed various cell types in solutions that solidified as rubbery slabs of hydrogel. To squeeze the cells, they placed weights on the hydrogel’s surface, in the form of either a quarter or a dime.

“We wanted to achieve a significant amount of cell size change, and those two weights can compress the cell by something like 10 to 30 percent of their total volume,” Guo explains.

The team used a confocal microscope to measure in 3D how individual cells’ shapes changed as each sample was compressed. As they expected, the cells shrank with pressure. But did squeezing also affect the cell’s contents? To answer this, the researchers first looked to see whether a cell’s water content changed. If squeezing acts to wring water out of a cell, the researchers reasoned that the cells should be less hydrated, and stiffer as a result.

They measured the stiffness of cells before and after weights were applied, using optical tweezers, a laser-based technique that Guo’s lab has employed for years to study interactions within cells, and found that indeed, cells stiffened with pressure. They also saw that there was less movement within cells that were squeezed, suggesting that their contents were more packed than usual.

Next, they looked at whether there were changes in the interactions between certain proteins in the cells, in response to cells being squeezed. They focused on several proteins that are known to trigger Wnt/β-catenin signaling, which is involved in cell growth and maintenance of “stemness.”

“In general, this pathway is known to make a cell more like a stem cell,” Guo says. “If you change this pathway’s activity, how cancer progresses and how embryos develop have been shown to be very different. So we thought we could use this pathway to demonstrate how cell crowding is important.”

To see whether cell squeezing affects the Wnt pathway, and how fast a cell grows, the researchers grew small organoids — miniature organs, and in this case, clusters of cells that were collected from the intestines of mice.

“The Wnt pathway is particularly important in the colon,” Guo says, pointing out that the cells that line the human intestine are constantly being replenished. The Wnt pathway, he says, is essential for maintaining intestinal stem cells, generating new cells, and “refreshing” the intestinal lining.

He and his colleagues grew intestinal organoids, each measuring about half a millimeter, in several Petri dishes, then “squeezed” the organoids by infusing the dishes with polymers. This influx of polymers increased the osmotic pressure surrounding each organoid and forced water out of their cells. The team observed that as a result, specific proteins involved in activating the Wnt pathway were packed closer together, and were more likely to cluster to turn on the pathway and its growth-regulating genes.

The upshot: Those organoids that were squeezed actually grew larger and more quickly, with more stem cells on their surface than those that were not squeezed.

“The difference was very obvious,” Guo says. “Whenever you apply pressure, the organoids grow even bigger, with a lot more stem cells.”

He says the results demonstrate how squeezing can affect an organoid’s growth. The findings also show that a cell’s behavior can change depending on the amount of water that it contains.

“This is very general and broad, and the potential impact is profound, that cells can simply tune how much water they have to tune their biological consequences,” Guo says.

Going forward, he and his colleagues plan to explore cell squeezing as a way to speed up the growth of artificial organs that scientists may use to test new, personalized drugs.

“I could take my own cells and transfect them to make stem cells that can then be developed into a lung or intestinal organoid that would mimic my own organs,” Guo says. “I could then apply different pressures to make organoids of different size, then try different drugs. I imagine there would be a lot of possibilities.”

This research is supported, in part, by the National Cancer Institute and the Alfred P. Sloan Foundation.