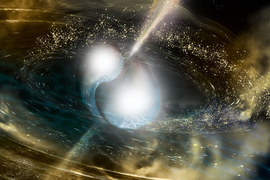 Most elements lighter than iron are forged in the cores of stars. A star’s white-hot center fuels the fusion of protons, squeezing them together to build progressively heavier elements. But beyond iron, scientists have puzzled over what could give rise to gold, platinum, and the rest of the universe’s heavy elements, whose formation requires more energy than a star can muster.

A new study by researchers at MIT and the University of New Hampshire finds that of two long-suspected sources of heavy metals, one is more of a goldmine than the other.

The study, published today in Astrophysical Journal Letters, reports that in the last 2.5 billion years, more heavy metals were produced in binary neutron star mergers, or collisions between two neutron stars, than in mergers between a neutron star and a black hole.

The study is the first to compare the two merger types in terms of their heavy metal output, and suggests that binary neutron stars are a likely cosmic source for the gold, platinum, and other heavy metals we see today. The findings could also help scientists determine the rate at which heavy metals are produced across the universe.

“What we find exciting about our result is that to some level of confidence we can say binary neutron stars are probably more of a goldmine than neutron star-black hole mergers,” says lead author Hsin-Yu Chen, a postdoc in MIT’s Kavli Institute for Astrophysics and Space Research.

Chen’s co-authors are Salvatore Vitale, assistant professor of physics at MIT, and Francois Foucart of UNH.

As stars undergo nuclear fusion, they require energy to fuse protons to form heavier elements. Stars are efficient in churning out lighter elements, from hydrogen to iron. Fusing more than the 26 protons in iron, however, becomes energetically inefficient.

“If you want to go past iron and build heavier elements like gold and platinum, you need some other way to throw protons together,” Vitale says.

Scientists have suspected supernovae might be an answer. When a massive star collapses in a supernova, the iron at its center could conceivably combine with lighter elements in the extreme fallout to generate heavier elements.

In 2017, however, a promising candidate was confirmed, in the form a binary neutron star merger, detected for the first time by LIGO and Virgo, the gravitational-wave observatories in the United States and in Italy, respectively. The detectors picked up gravitational waves, or ripples through space-time, that originated 130 million light years from Earth, from a collision between two neutron stars — collapsed cores of massive stars, that are packed with neutrons and are among the densest objects in the universe.

The cosmic merger emitted a flash of light, which contained signatures of heavy metals.

“The magnitude of gold produced in the merger was equivalent to several times the mass of the Earth,” Chen says. “That entirely changed the picture. The math showed that binary neutron stars were a more efficient way to create heavy elements, compared to supernovae.”

Chen and her colleagues wondered: How might neutron star mergers compare to collisions between a neutron star and a black hole? This is another merger type that has been detected by LIGO and Virgo and could potentially be a heavy metal factory. Under certain conditions, scientists suspect, a black hole could disrupt a neutron star such that it would spark and spew heavy metals before the black hole completely swallowed the star.

The team set out to determine the amount of gold and other heavy metals each type of merger could typically produce. For their analysis, they focused on LIGO and Virgo’s detections to date of two binary neutron star mergers and two neutron star – black hole mergers.

The researchers first estimated the mass of each object in each merger, as well as the rotational speed of each black hole, reasoning that if a black hole is too massive or slow, it would swallow a neutron star before it had a chance to produce heavy elements. They also determined each neutron star’s resistance to being disrupted. The more resistant a star, the less likely it is to churn out heavy elements. They also estimated how often one merger occurs compared to the other, based on observations by LIGO, Virgo, and other observatories.

Finally, the team used numerical simulations developed by Foucart, to calculate the average amount of gold and other heavy metals each merger would produce, given varying combinations of the objects’ mass, rotation, degree of disruption, and rate of occurrence.

The scales could tip in favor of neutron star-black hole mergers if the black holes had high spins, and low masses. However, scientists have not yet observed these kinds of black holes in the two mergers detected to date.

Chen and her colleagues hope that, as LIGO and Virgo resume observations next year, more detections will improve the team’s estimates for the rate at which each merger produces heavy elements. These rates, in turn, may help scientists determine the age of distant galaxies, based on the abundance of their various elements.

“You can use heavy metals the same way we use carbon to date dinosaur remains,” Vitale says. “Because all these phenomena have different intrinsic rates and yields of heavy elements, that will affect how you attach a time stamp to a galaxy. So, this kind of study can improve those analyses.”

This research was funded, in part, by NASA, the National Science Foundation, and the LIGO Laboratory.