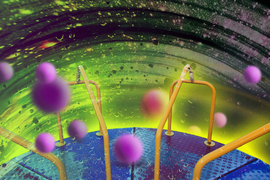 ↓ Download Image
Caption: “If you jump onto and then down from a carousel, you can steal energy from the carousel,” says co-author Salvatore Vitale. “These bosons do the same thing to a black hole.”
Credits: Image: Jose-Luis Olivares, MIT

Caption:
“If you jump onto and then down from a carousel, you can steal energy from the carousel,” says co-author Salvatore Vitale. “These bosons do the same thing to a black hole.”
Credits:
Image: Jose-Luis Olivares, MIT

Ultralight bosons are hypothetical particles whose mass is predicted to be less than a billionth the mass of an electron. They interact relatively little with their surroundings and have thus far eluded searches to confirm their existence. If they exist, ultralight bosons such as axions would likely be a form of dark matter, the mysterious, invisible stuff that makes up 85 percent of the matter in the universe.

Now, physicists at MIT’s LIGO Laboratory have searched for ultralight bosons using black holes — objects that are mind-bending orders of magnitude more massive than the particles themselves. According to the predictions of quantum theory, a black hole of a certain mass should pull in clouds of ultralight bosons, which in turn should collectively slow down a black hole’s spin. If the particles exist, then all black holes of a particular mass should have relatively low spins.

The team’s results, published today in Physical Review Letters, further narrow the search for axions and other ultralight bosons. The study is also the first to use the spins of black holes detected by LIGO and Virgo, and gravitational-wave data, to look for dark matter.

“There are different types of bosons, and we have probed one,” says co-author Salvatore Vitale, assistant professor of physics at MIT. “There may be others, and we can apply this analysis to the growing dataset that LIGO and Virgo will provide over the next few years.”

Vitale’s co-authors are lead author Kwan Yeung (Ken) Ng, a graduate student in MIT’s Kavli Institute for Astrophysics and Space Research, along with researchers at Utrecht University in the Netherlands and the Chinese University of Hong Kong.

Ultralight bosons are being searched for across a huge range of super-light masses, from 1x10-33 electronvolts to 1x10-6 electronvolts. Scientists have so far used tabletop experiments and astrophysical observations to rule out slivers of this wide space of possible masses. Since the early 2000s, physicists proposed that black holes could be another means of detecting ultralight bosons, due to an effect known as superradiance.

If ultralight bosons exist, they could interact with a black hole under the right circumstances. Quantum theory posits that at a very small scale, particles cannot be described by classical physics, or even as individual objects. This scale, known as the Compton wavelength, is inversely proportional to the particle mass.

As ultralight bosons are exceptionally light, their wavelength is predicted to be exceptionally large. For a certain mass range of bosons, their wavelength can be comparable to the size of a black hole. When this happens, superradiance is expected to quickly develop. Ultralight bosons are then created from the vacuum around a black hole, in quantities large enough that the tiny particles collectively drag on the black hole and slow down its spin.

“If you jump onto and then down from a carousel, you can steal energy from the carousel,” Vitale says. “These bosons do the same thing to a black hole.”

“If bosons exist, we would expect that old black holes of the appropriate mass don’t have large spins, since the boson clouds would have extracted most of it,” Ng says. “This implies that the discovery of a black hole with large spins can rule out the existence of bosons with certain masses.”

Spin up, spin down

Ng and Vitale applied this reasoning to black hole measurements made by LIGO, the Laser Interferometer Gravitational-wave Observatory, and its companion detector Virgo. The detectors “listen” for gravitational waves, or reverberations from far-off cataclysms, such as merging black holes, known as binaries.

In their study, the team looked through all 45 black hole binaries reported by LIGO and Virgo to date. The masses of these black holes — between 10 and 70 times the mass of the sun — indicate that if they had interacted with ultralight bosons, the particles would have been between 1x10-13 electronvolts and 2x10-11 electronvolts in mass.

For every black hole, the team calculated the spin that it should have if the black hole was spun down by ultralight bosons within the corresponding mass range. From their analysis, two black holes stood out: GW190412 and GW190517. Just as there is a maximum velocity for physical objects — the speed of light — there is a top spin at which black holes can rotate. GW190517 is spinning at close to that maximum. The researchers calculated that if ultralight bosons existed, they would have dragged its spin down by a factor of two.

“If they exist, these things would have sucked up a lot of angular momentum,” Vitale says. “They’re really vampires.”

The researchers also accounted for other possible scenarios for generating the black holes’ large spins, while still allowing for the existence of ultralight bosons. For instance, a black hole could have been spun down by bosons but then subsequently sped up again through interactions with the surrounding accretion disk — a disk of matter from which the black hole could suck up energy and momentum.

“If you do the math, you find it takes too long to spin up a black hole to the level that we see here,” Ng says. “So, we can safely ignore this spin-up effect.”

“We’ve basically excluded some type of bosons in this mass range,” Vitale says. “This work also shows how gravitational-wave detections can contribute to searches for elementary particles.”

Boston Globe reporter Charlie McKenna writes that MIT researchers have used the spin of black holes detected by the LIGO and Virgo detectors to search for dark matter. "In reality, there is a much broader set of theories that predict or relies on the existence of these very ultra-light particles,” says Prof. Salvatore Vitale. “One is dark matter. So they could be dark matter. But they could also solve other open problems in particle physics.”

A new study by MIT researches finds that some masses of boson particles don’t actually exist, reports Monisha Ravisetti for The Academic Times. “[Bosons] could be dark matter particles, or they could be something that people call axions, which are proposed particles that could solve problems with the magnetic bipoles of particles,” says Prof. Salvatore Vitale. “Because they can be any of these things, that means they could also have an incredibly broad range of masses.”

Full story via The Academic Times →