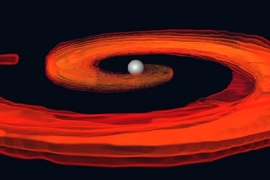 ↓ Download Image
Caption: Artist’s depiction of the last instances of a neutron star and black hole merger, as the neutron star is destroyed by the tidal pull of the black hole (at the center of the disk).
Credits: Image: A. Tonita, L. Rezzolla, F. Pannarale

Caption:
Numerical simulation of the last instances of a neutron star and black hole merger, as the neutron star is destroyed by the tidal pull of the black hole (at the center of the disk).
Credits:
Image: A. Tonita, L. Rezzolla, F. Pannarale

Since it first exploded into existence 13.8 billion years ago, the universe has been expanding, dragging along with it hundreds of billions of galaxies and stars, much like raisins in a rapidly rising dough.

Astronomers have pointed telescopes to certain stars and other cosmic sources to measure their distance from Earth and how fast they are moving away from us — two parameters that are essential to estimating the Hubble constant, a unit of measurement that describes the rate at which the universe is expanding.

But to date, the most precise efforts have landed on very different values of the Hubble constant, offering no definitive resolution to exactly how fast the universe is growing. This information, scientists believe, could shed light on the universe’s origins, as well as its fate, and whether the cosmos will expand indefinitely or ultimately collapse.

Now scientists from MIT and Harvard University have proposed a more accurate and independent way to measure the Hubble constant, using gravitational waves emitted by a relatively rare system: a black hole-neutron star binary, a hugely energetic pairing of a spiraling black hole and a neutron star. As these objects circle in toward each other, they should produce space-shaking gravitational waves and a flash of light when they ultimately collide.

In a paper published today in Physical Review Letters, the researchers report that the flash of light would give scientists an estimate of the system’s velocity, or how fast it is moving away from the Earth. The emitted gravitational waves, if detected on Earth, should provide an independent and precise measurement of the system’s distance. Even though black hole-neutron star binaries are incredibly rare, the researchers calculate that detecting even a few should yield the most accurate value yet for the Hubble constant and the rate of the expanding universe.

“Black hole-neutron star binaries are very complicated systems, which we know very little about,” says Salvatore Vitale, assistant professor of physics at MIT and lead author of the paper. “If we detect one, the prize is that they can potentially give a dramatic contribution to our understanding of the universe.”

Two independent measurements  of the Hubble constant were made recently, one using NASA's Hubble Space Telescope and another using the European Space Agency's Planck satellite. The Hubble Space Telescope’s measurement is based on observations of a type of star known as a Cepheid variable, as well as on observations of supernovae. Both of these objects are considered “standard candles,” for their predictable pattern of brightness, which scientists can use to estimate the star’s distance and velocity.

The other type of estimate is based on observations of the fluctuations in the cosmic microwave background — the electromagnetic radiation that was left over in the immediate aftermath of the Big Bang, when the universe was still in its infancy. While the observations by both probes are extremely precise, their estimates of the Hubble constant disagree significantly.

“That’s where LIGO comes into the game,” Vitale says.

“Gravitational waves provide a very direct and easy way of measuring the distances of their sources,” Vitale says. “What we detect with LIGO is a direct imprint of the distance to the source, without any extra analysis.”

In 2017, scientists got their first chance at estimating the Hubble constant from a gravitational-wave source, when LIGO and its Italian counterpart Virgo detected a pair of colliding neutron stars for the first time. The collision released a huge amount of gravitational waves, which researchers measured to determine the distance of the system from Earth. The merger also released a flash of light, which astronomers focused on with ground and space telescopes to determine the system’s velocity.

With both measurements, scientists calculated a new value for the Hubble constant. However, the estimate came with a relatively large uncertainty of 14 percent, much more uncertain than the values calculated using the Hubble Space Telescope and the Planck satellite.

Vitale says much of the uncertainty stems from the fact that it can be challenging to interpret a neutron star binary’s distance from Earth using the gravitational waves that this particular system gives off.

“We measure distance by looking at how ‘loud’ the gravitational wave is, meaning how clear it is in our data,” Vitale says. “If it’s very clear, you can see how loud it is, and that gives the distance. But that’s only partially true for neutron star binaries.”

In 2014, before LIGO made the first detection of gravitational waves, Vitale and his colleagues observed that a binary system composed of a black hole and a neutron star could give a more accurate distance measurement, compared with neutron star binaries. The team was investigating how accurately one could measure a black hole’s spin, given that the objects are known to spin on their axes, similarly to Earth but much more quickly.

“Because of this better distance measurement, I thought that black hole-neutron star binaries could be a competitive probe for measuring the Hubble constant,” Vitale says. “Since then, a lot has happened with LIGO and the discovery of gravitational waves, and all this was put on the back burner.”

Vitale recently circled back to his original observation, and in this new paper, he set out to answer a theoretical question:

To answer this question, the team ran simulations to predict the occurrence of both types of binary systems in the universe, as well as the accuracy of their distance measurements. From their calculations, they concluded that, even if neutron binary systems outnumbered black hole-neutron star systems by 50-1, the latter would yield a Hubble constant similar in accuracy to the former.

“So far, people have focused on binary neutron stars as a way of measuring the Hubble constant with gravitational waves,” Vitale says. “We’ve shown there is another type of gravitational wave source which so far has not been exploited as much: black holes and neutron stars spiraling together,” Vitale says. “LIGO will start taking data again in January 2019, and it will be much more sensitive, meaning we’ll be able to see objects farther away. So LIGO should see at least one black hole-neutron star binary, and as many as 25, which will help resolve the existing tension in the measurement of the Hubble constant, hopefully in the next few years.”

This research was supported, in part, by the National Science Foundation and the LIGO Laboratory.

A new study co-authored by Assistant Prof. Salvatore Vitale shows that the collision of a black hole and neutron star could provide insight into how quickly the universe is expanding. One such merger could allow physicists to calculate the expansion rate “as effectively as combining data from 50 different neutron-star collisions,” reports Meghan Bartels for Space.com.

A new paper by Assistant Prof. Salvatore Vitale finds that studying the rare pairing of a neutron star and a spiraling black hole could allow researchers to determine the universe’s rate of expansion, writes Jeremy Fox of The Boston Globe. The positive detection of a collision could “potentially give a dramatic contribution to our understanding of the universe,” says Vitale.