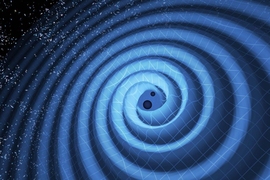 For the second time, scientists have directly detected gravitational waves — ripples through the fabric of space-time, created by extreme, cataclysmic events in the distant universe. The team has determined that the incredibly faint ripple that eventually reached Earth was produced by two black holes colliding at half the speed of light, 1.4 billion light years away.

The scientists detected the gravitational waves using the twin Laser Interferometer Gravitational-wave Observatory (LIGO) interferometers, located in Livingston, Louisiana, and Hanford, Washington. On Dec. 26, 2015, at 3:38 UTC, both detectors, situated more than 3,000 kilometers apart, picked up a very faint signal amid the surrounding noise.

For the second time, scientists have directly detected gravitational waves — ripples through the fabric of space-time, created by extreme, cataclysmic events in the distant universe. The team has determined that the incredibly faint ripple that eventually reached Earth was produced by two black holes colliding at half the speed of light, 1.4 billion light years away.

While LIGO’s first detection, reported on Feb. 11, produced a clear peak, or “chirp,” in the data, this second signal was far subtler, generating a shallower waveform — essentially a faint squeak — that was almost buried in the data. Using advanced data analysis techniques, the team determined that indeed, the waveform signaled a gravitational wave.

The researchers calculated that the gravitational wave arose from the collision of two black holes, 14.2 and 7.5 times the mass of the sun. The signal picked up by LIGO’s detectors encompasses the final moments before the black holes merged: For roughly the final second, while the signal was detectable, the black holes spun around each other 55 times, approaching half the speed of light, before merging in a collision that released a huge amount of energy in the form of gravitational waves, equivalent to the mass of the sun. This cataclysm, occurring 1.4 billion years ago, produced a more massive spinning black hole that is 20.8 times the mass of the sun.

“We did it again,” says Salvatore Vitale, a research scientist in MIT’s Kavli Institute for Astrophysics and Space Research and a LIGO team member. “The first event was so beautiful that we almost couldn’t believe it. Now, the fact of having seen another gravitational wave proves that indeed we are observing a population of binary black holes in the universe. We know we’ll see many of these frequently enough to make interesting science out of them.”

The scientists, as part of the LIGO Scientific Collaboration and the Virgo Collaboration, have published their results today in Physical Review Letters.

LIGO’s two interferometers, each 4 kilometers long, are designed in such a way that each detector should stretch by an infinitesimal amount if a gravitational wave were to pass through. On Sept. 14, 2015, the detectors picked up the very first signal of a gravitational wave, which stretched each detector by as little as a fraction of a proton’s diameter. Just four months later, on Dec. 26, LIGO recorded a second signal, which stretched the detectors by an even smaller amount.

“When we detected the very first signal, it was so short and loud that you could see it in the data, this nice beautiful track,” Vitale says. “With this new event, it’s totally different. It’s not a single bump of power that’s easy to see. It’s totally buried inside the noise.”

To extricate the signal and determine whether it was indeed a gravitational wave or simply noise from the detectors themselves, the scientists employed matched filtering, a signal processing technique that allows scientists to dig deep into LIGO’s noise to detect signals with known waveforms, or patterns.

In this case, the team assembled a bank of hundreds of thousands of known waveforms, each corresponding to different masses and spins of black holes. Then, the scientists ran LIGO’s data through each waveform in the bank, looking for a match.

With some additional analysis, called parameter estimation, they found that the same signal, detected at both interferometers, matched a single scenario: the merging of two black holes, 14.2 and 7.5 times the mass of the sun, colliding 1.4 billion light years away. The colliding black holes are less massive than those that generated the first gravitational wave signal. The masses of the newly detected black holes are also more representative of the black holes that astronomers have observed in the universe.

“In a way this is nice and reassuring — it means we may be targeting the same population that we can observe with traditional astronomy,” says Lisa Barsotti, a principal research scientist at MIT Kavli and a member of the LIGO team. “This is a new era of astronomy, and now we can actually probe the universe in ways that we never imagined we could do before.”

Reaching back in time

In its first four months, the Advanced LIGO detectors have already detected two signals of gravitational waves, produced by the collision of two very different binary black hole systems. David Shoemaker, who led the team that built the detectors, notes that “the observatory is currently offline and undergoing upgrades to improve its sensitivity, and is expected to begin its next observing run in the fall,” when scientists anticipate detecting even more gravitational waves and extreme astrophysical events.

“We are very quickly transitioning from one event every few months, to a few every month,” Vitale says. “We’ll also be able to see objects farther away, in space and time.”

With more detections, the team hopes to answer one central question: How do black holes merge? Astronomers have hypothesized that there are two possible routes by which this might happen. As black holes are “born” from exploding stars, one hypothesis posits that two such stars may have circled each other previously, before collapsing into black holes that stayed together, circling closer and closer before finally merging. The other hypothesis suggests that two independent black holes, existing in a dense population of black holes, may have become gravitationally bound, and eventually merged.

“These are extremely different scenarios, and one thing we want to do in the future is to know which happens more frequently,” Vitale says. “We’ll have to wait for more detections to start making these interesting astrophysical discoveries.”

In the fall, when LIGO is back up and running, it will have additional help from Virgo, a third interferometer located near Pisa, Italy, that will detect gravitational waves with a 3-kilometer-long detector. LIGO scientists, including Barsotti, are also working on a design that is even more sensitive than LIGO, in hopes of observing the earliest events in the universe.

“Gravitational waves are the only way you can do that, that we know of today,” Vitale says. “Because the universe was opaque to light for the first 380,000 years or so. But gravitational waves could get through, and it’s our only potential tool to really probe the very beginning of time.”

“As you can imagine, for most of us, these detections have had a very strong impact on our lives, because we’d been waiting for this for a very long time,” Barsotti says. “It’s been an incredible experience, the last few months.”

This research was funded by the National Science Foundation. LIGO was designed, built, and operated by Caltech and MIT.

Prof. Nergis Mavalvala speaks with Scientific American about black holes, gravitational waves, and attracting more women and minorities to STEM fields. She explains that studying the building blocks of the universe is important for understanding the “big questions: What are we made of? Where do we come from?”

Scientists have observed a second pair of black holes colliding using the twin detectors of the Laser Interferometer Gravitational Wave Observatory (LIGO), reports Dennis Overbye for The New York Times. Overbye writes that LIGO provides “a way of hearing the universe instead of just looking at it.”

In an article for New Scientist, Lisa Grossman writes that for the second time the Laser Interferometer Gravitational Wave Observatory (LIGO) has detected gravitational waves. “This gives us confidence,” says MIT research scientist Salvatore Vitale. “It was not just a lucky accident. Seeing a second one tells us clearly that there is a population of black holes there.”

Boston Globe reporter Eric Moskowitz writes that scientists have been able to detect gravitational waves for the second time. “It’s a wondrous thing,” said David Shoemaker, who leads the MIT lab that helped build the detectors. “Three months apart, 1.4 billion years ago, these two events happened at two different places in the sky.”

For the second time, scientists have detected gravitational waves produced by the collision of two black holes, reports Irene Klotz for Reuters. “We are starting to get a glimpse of the kind of new astrophysical information that can only come from gravitational-wave detectors,” says David Shoemaker, who leads Advanced LIGO.

Ryan Mandelbaum of Popular Science speaks with David Shoemaker, who leads MIT’s LIGO Lab and Advanced LIGO, about the second successful detection of gravitational waves. "It’s wonderful," says Shoemaker. "It’s so different from the first one ... but its importance is no less."