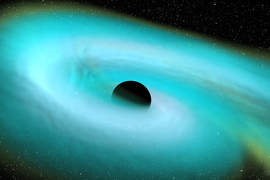 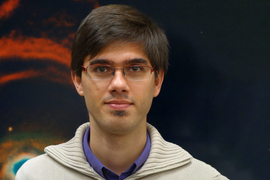 Today, an international team of scientists, including researchers at MIT, have announced the detection of a new kind of astrophysical system: a collision between a black hole and a neutron star — two of the densest, most exotic objects in the universe.

Scientists have detected signals of colliding black holes, and colliding neutron stars, but had not confirmed a merging of a black hole with a neutron star until now. In a study appearing today in The Astrophysical Journal Letters, the scientists report observing not just one, but two such rare events, each of which gave off gravitational waves that reverberated across a large swath of the universe before reaching Earth in January 2020, just 10 days apart.

The gravitational waves from both collisions were detected by the National Science Foundation’s Laser Interferometer Gravitational-Wave Observatory (LIGO) in the United States, and by Virgo in Italy. The events are named GW200105 and GW200115, for the date when each gravitational wave was observed. Both signals represent the final moments as a black hole and a neutron star spiraled in and merged together. For GW200105, the black hole is estimated to be about 9 times the mass of the sun, with a companion neutron star of about 1.9 solar masses. The the two objects are estimated to have merged around 900 million years ago. GW200115 is the product of a 6-solar-mass black hole, which collided with a neutron star about 1.5 times the mass of our sun, around 1 billion years ago. In both events, the black holes were large enough that they likely devoured their neutron stars completely, leaving very little to no light in their aftermath.

LIGO team member Salvatore Vitale, MIT assistant professor of physics, and a member of the Kavli Institute for Astrophysics and Space Research, spoke with MIT News about the rarity of both detections, and what the mergers of black holes and neutron stars may reveal about the evolution of stars in the universe.

Q: Tell us about these extreme, elusive systems. In general, what was known about collisions involving black holes and neutron stars prior to these detections?

A: Both neutron stars and black holes are left behind by massive stars once they run out of nuclear fuel. Since a large fraction of the stars in the universe are in binary systems, one would expect the existence of all possible pairwise combinations: two neutron stars, two black holes, or a neutron star and a black hole.

Neutron star binaries have been known for decades, discovered using electromagnetic radiation. Black hole binaries were observed for the first time in 2015, with the gravitational-wave detection GW150914. After that, gravitational-wave detectors such as LIGO and Virgo have discovered tens of binary black holes and two binary neutron stars. However, binaries with one neutron star and one black hole (NSBH) had never been found using electromagnetic radiation, nor with gravitational waves, at least until now.

Q: What can you tell from the signal about the possible scenarios that could have brought these objects together in the first place?

Sadly, not very much, at this stage! The most likely scenario is that the two objects in each binary have been together their whole life, as giant stars. As they ran out of fuel, they went through powerful explosions known as supernovae, leaving behind a neutron star and a black hole. The two objects in the binary then got closer and closer, since they lose energy through gravitational-wave emission, until they collide. LIGO and Virgo saw the last few seconds leading to the collision.

Theoretically these mergers could produce light, which is extremely exciting! However, for that to happen, one needs some matter to be left around the system after the collision. Unfortunately, if the black hole is too massive, or if it doesn’t rotate fast enough around its axis, it will entirely swallow the neutron star before this has a chance to get torn apart. When this happens, no matter is left behind, and hence no light. This is what might have happened with both of these gravitational-wave detections.

However, it is also possible that light was, in fact, emitted but was not detected by the telescopes that followed-up these systems. This is because their position in the sky — based on the gravitational-wave data — was rather uncertain, which implies telescopes might not have had a chance to find the electromagnetic counterpart before it faded away.

Q: What is the overall significance of this new detection? And what avenues does this open up in our understanding of the universe?

A: These two systems are important since they are the first clear discovery of neutron star black hole binaries, a type of source that had never been observed, with either electromagnetic or gravitational waves. It tells us that these systems do exist but are more rare than binary neutron stars. With only two sources, the numbers are still very uncertain, but roughly: for every 10 neutron star binaries, there is one NSBH merger.

The merger rate that we have calculated using these two signals, and the properties of the compact objects, will be a tremendous help to astronomers and modelers trying to understand formation and the evolution of NSBHs.

In fact, since none had ever been observed before, there wasn’t a good way to refine theoretical and numerical models. Those models are complicated and depend on many of the physical parameters of the binary system, as well as its history. For example: How violent is the supernova explosion that leaves behind neutron stars and black holes? Is it so powerful that it can destroy the binary system altogether?

Finally having access to NSBH mergers will help refine these models, and hence our understanding of the formation and evolution of compact objects.

People rarely vote after being incarcerated. Associate Professor Ariel White wonders what can be done about it.

The Plasma Science and Fusion Center mechanical engineer embraces her role in modeling fusion magnets and in promoting engineering to young women.