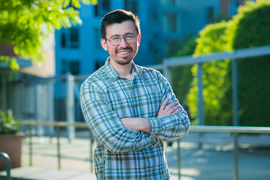 When it comes to journeys to MIT, Manuel Morales, a doctoral candidate in the Harvard-MIT Program in Health Sciences and Technology, has taken a different tack.

As a high school student in Orlando, Florida, Morales admired the Navy, inspired by ideas of commitment and sacrifice for nation and family, as portrayed in old war movies he used to watch at the cinema with his mom, Maria. Morales enlisted in the Navy right after his high school graduation, leaving his hometown for a life at sea.

Looking back, he says, there were a few moments in his naval training that set him on course to MIT. In bootcamp, trainees who got a perfect score on the naval training exam would be allowed a one-hour phone call home — a priceless prize for Morales. He studied furiously and, to his surprise, found that he enjoyed it. Later, after receiving an average score on a job qualifying exam, he was placed as an electrical engineer and assigned to worn-down accommodations. He couldn’t help but notice that the top-scorers were offered hotel-like digs. “I was very salty!” he says, laughing.

Morales was determined to surpass that average test score, and that competitive spark fueled his growing academic talent. Some of his classes on the electrical engineering path were considered more challenging and prestigious, and in those classes, he recalls, “I made it a point to perform better than everyone, and that’s when I started realizing, ‘Oh, I actually like this stuff! Not only do I like it, but I’m actually good at it.’ And that just became the trend overall.” By the time he left training, he was at the top of his class.

Morales was assigned to the USS Kauffman, a frigate in Norfolk, Virginia. Typically, the engineering department on board U.S. ships oversees all aspects of the engineering plan at sea, ranging from power supply to propulsion to life-support systems. Morales quickly achieved every skill and qualification possible in his department. Sometimes, that meant developing his math skills for some of the more challenging leadership roles in the engineering department. Crucially, though, Morales became increasingly motivated by his own curiosity.

“I started taking college classes while I was still on the ship. Some of them were online … but back then, it wasn’t really online,” he says with a smile. “In the ship you couldn’t really do classes ‘online’ because, of course, we didn’t have any internet. For some of these you had to teach yourself, and have a superior officer agree to test you and send your answers in the ‘helicopter’ mail. That’s how I learned calculus! I took Calc I and II like that. It was very hard, but luckily I had time, being inside of a ship for long stretches.” Morales went on to become the ship’s youngest-ever Engineering Officer of the Watch.

Still, during his long nights leading the department, Morales began to realize he might not be on the right track in the Navy. In order to pursue his deepening interest in the fundamentals of mathematics and physics, Morales enrolled at a Florida community college — and never looked back.

The next big turning points in his academic path arrived in the form of two professors, each of whom threw down the gauntlet. His community college physics professor had a reputation for failing students; unsurprisingly, Morales embraced the challenge. In fact, he realized he wanted to study physics instead of electrical engineering. “I didn’t think I had any business doing physics. The way I thought about engineering back then was just making something and, to me, physics was actually really thinking about the nature of the universe, how it actually works, how are things made up,” he says.

Morales went on to pursue a physics degree at the University of Central Florida, where he savored the academic experience he felt he had missed out on while serving in the Navy. In his classical mechanics course, he encountered Richard Klemm, a notoriously unfriendly professor, which inspired him to work double-time. After a perfect score on the final exam, Klemm contacted Morales, encouraging him to apply to graduate school. Morales joined Klemm’s laboratory studying quantum mechanics with just three semesters left in college.

Considering a PhD was a wake-up call for Morales. “I still wanted to do physics, but at that point I realized that catching up was not always going to be as easy!” Then he discovered medical physics, the application of physics principles to developing medical technology. The HST graduate program at MIT seemed like a natural fit.

Home, and where heart research is

Morales is currently wrapping up his doctoral work at the Athinoula A. Martinos Center for Biomedical Imaging, at the Charleston branch of Massachusetts General Hospital. There, he operates his lab’s diagnostic imaging pipeline, from patient recruitment to scanning, using machine learning approaches to improve the diagnostic ability of MRIs — particularly detecting heart disease in young patients.

“I have been able to develop some methods that can look at these images and, in addition to the tools that already exist, they can actually look at the cardiac motion to be able to detect whether there is some dysfunction in there, despite some patients being quite young,” Morales explains.

His success in graduate school hasn’t dimmed his ambition; he will begin work in a “very hard-core” Boston-area postdoc lab in July. Yet, as he approaches the end of his MIT career, he’s taken the time to reflect about his time in the HST program. “Just thinking back on all the friendships that I made in the first year and the experiences that I had, it was just absolutely fantastic, even though it was a little bit difficult,” he says. That camaraderie helped him and his peers weather the program together, including medical courses — uncharted terrain for Morales. “I think HST itself does a really good job setting it up so that you’re well-positioned to succeed and have all the resources you need.”

Morales also gained two best friends through the HST program, Ang Cui and John Samuelsson, who are graduating with him. They have accomplished so many milestones together, from course exams to qualifying exams, that the trio gave themselves a name: the Winners Club. Beyond academics, they have also shared an interest in exploring the greater-Boston area and New England, including hiking and rock climbing jaunts.

Morales says that he and his wife, Paola, have fallen in love with the region. They visit Vermont each holiday season, and they enjoy taking visitors on long walks around Boston with their Welsh Terrier. But it’s also the academic bustle of Cambridge that has charmed Morales.

“One of the things I love is just being able to go to a coffee shop and at any given point and just finding everybody working on some sort of problem or chatting about some interesting topic. It’s not uncommon to find people reading, working on papers, working on their laptops, having a business meeting. There’s always some interesting interaction happening at any given moment. And it is motivating to work in that sort of environment.”

The physicist and the hospital