A logical look at the subjectivity of speech 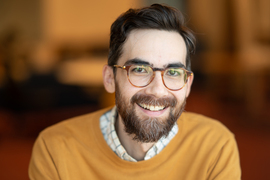 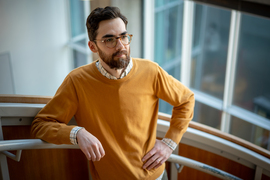 Caption:
MIT philosopher Justin Khoo’s work analyzes the uses of language in relation to question about what we know.
Credits:
Photo: Bryce Vickmark

Suppose you see a Vermeer in a museum and wish to express your reaction to some companions. You could say, “That’s a beautiful painting.” Or you could tell them, “I think that painting looks good.” Surely either of those phrases expresses the same basic point.

“There’s a kind of Janus-faced nature of some language, so certain linguistic expressions allow for a kind of subjective and objective mixing,” observes Khoo, an associate professor of philosophy at MIT.

Sometimes that mixing happens in aesthetics. It also occurs in the realm of knowledge, where modals such as “might,” “must,” and “probably” qualify our certainty about the state of the world. And it often crops up in matters of morality: We may make statements about what we think is right or wrong, then encounter other people with equal certitude but different values.

“That structure arises all over the place,” says Khoo.

That structure is also the kind of thing that fuels his research. As a scholar, Khoo blends philosophy and linguistics to examine the way we communicate about politics, values, knowledge, and taste. Often Khoo examines the tension between “invariantism” and “contextualism” — between seemingly definitive statements and the subjective perspective of speakers. Khoo does so in many ways, from rigorous analysis about particular statements to linguistic studies of language use. He has even conducted experimental research revealing that people seem more relaxed about the coexistence of seemingly competing moral values than some scholars have suspected.

As such, Khoo’s work provides tools for thinking about how we can live together better.

For his wide-ranging research — Khoo has authored or co-authored over 20 published papers and has a new book coming out in 2022 — and for his teaching, Khoo received tenure from MIT earlier this year.

Like many professors, Khoo had a clear goal in mind when he entered college. Less typically, that goal was to become a musician. Khoo first enrolled in music school, but after a year he dropped out, moved home to Northern California, and enrolled in Santa Rosa Junior College.

There, Khoo’s interest in philosophy blossomed, particularly after a class when a professor, Michael Aparicio, outlined the issue of skepticism, as presented by thinkers such as Descartes and Hume: How can we be sure of the things we think we know?

“It gripped me in a way that no other topic had previously gripped me,” Khoo says.

After graduating from junior college, Khoo enrolled at the University of California at Davis. Having satisfied his general education requirements in junior college, Khoo promptly took 24 philosophy classes at Davis. Apart from minoring in sociology, Khoo says, “It was the only thing that I did. It was wonderful. I was able to just entirely pursue philosophy.”

After graduating, Khoo was accepted into the PhD program at Yale University, where he received his doctorate in 2013. Khoo joined the MIT faculty the same year and has been at the Institute ever since — a logical fit in a sense, given that linguists and philosophers are formally linked through the Institute’s Department of Linguistics and Philosophy.

Khoo’s research program is nonetheless distinctively his own. In some ways, his work remains a response to the problem of skepticism — although rather than debating matters on the terms of the skeptics, he examines how language helps shape the way we “know” things. At the same time, Khoo has pursued a breadth of topics, through multiple approaches.

Consider a 2018 paper published in Nous, written with Joshua Knobe of Yale University, in which the scholars conducted a survey. They found that when participants evaluated competing moral claims, to a surprising extent they did not believe those claims must be exclusionary of each other. In fact, they frequently granted that differing moral views may be based on the circumstances in which people exist. At the same time, the participants still thought the people making those claims disagreed with each other. This implies that the participants simultaneously recognize disagreement among people, while still leaving open the possibility that both parties may be right.

Idiosyncratic thought it might seem, that kind of thinking should be kept in mind “if we want to respect ordinary intuitions about disagreement in moral conflicts,” Khoo and Knobe write.

“The Shining”: Not scary, actually

Khoo’s sense of inventiveness also translates into the classroom, where he has often made a point of incorporating current events into his teaching. In his undergraduate seminar 24.192 (Language, Information, and Power), Khoo has had students observe the curiosities of political discourse. When candidates contradict themselves, Khoo notes, citing the work of philosopher Michael Lynch, they may actually gain voters by appealing to more people — because in order to resolve the contradiction, listeners can choose to believe whichever side they want.

Meanwhile, Khoo’s forthcoming book, “The Meaning of If,” digs into hypothetical language and thought, including probabilities, counterfactual scenarios, and many other forms of conditional thinking. It is being published by Oxford University Press in 2022.

As if all this were not enough, Khoo and his wife, Laura Khoo, co-host a film-related podcast, “Cows in the Field,” which ranges widely across the cinematic landscape, discussing one movie per episode. (The title is taken from a Werner Herzog remark.) Film is another of Khoo’s burning interests, and the podcast lets him dig into past movies. For an episode about “The Last Days of Disco,” the film’s director, Whit Stillman, made a guest appearance. When the podcast discussed “Office Space,” Khoo’s parents joined the show and his father related corporate indignities such as having the company-provided coffee taken away.

Apart from Khoo’s sheer enjoyment of the medium, film is another vehicle through which he likes to explore philosophical concepts. Suppose, for instance, after your museum trip where you saw the Vermeer, you and your friends all watched “The Shining” together. And imagine that you found it to be a scary film, and told this to everyone else. That creates another situation where we can examine subjectivity and language.

Such arguments do serve a purpose. “That allows us a kind of common content to disagree over and fight over, and it facilitates our communication,” Khoo says. “I think that’s often what’s going on with this type of language. It gives us a model for thinking about what there is in the world, and how much we need to posit [about the world] to make sense of it.”

Applying philosophy for a better democracy

How philosophy can solve your midlife crisis