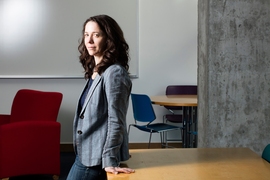 ↓ Download Image
Caption: “I’m really loving MIT so far,” MIT philosophy professor Tamar Schapiro says. “The philosophy department here has a reputation as being the friendliest in the country, and it’s really true. People enjoy it, and that creates a virtuous cycle.”

Caption:
“I’m really loving MIT so far,” MIT philosophy Associate Professor Tamar Schapiro says. “The philosophy department here has a reputation as being the friendliest in the country, and it’s really true. People enjoy it, and that creates a virtuous cycle.”
Credits:
Photo: M. Scott Brauer

Most of us have impulses we try not to indulge: We generally know we should not get too angry, drive too fast, or be unkind to others. And when we refrain from these things, we often congratulate ourselves for an act of willpower, in which our well-established rational side exercises its rightful veto over our nonrational instincts.

Over time, people have interpreted this tension between reason and emotion in diverging ways. One popular trope is that humans are, at our cores, rational decision makers. A different view, popularized by Romantic art and literature, is that our emotions represent our “true” selves, often stifled by reason.

To MIT philosophy Associate Professor Tamar Schapiro, however, neither view accommodates our full human complexity. What is salient about the presence of reason and impulse, in part, is that they are intertwined.

Indeed, as Schapiro has contended in a series of published papers over the last several years, we should regard our instincts as supplying the raw material that our reason acts upon. Far from thinking of our rational and emotional sides as separate, then, we should recognize that in applying reason to emotion — perhaps to calm down, slow down, or treat others well — we come to define our adult selves.

Or, as Schapiro wrote in a widely cited 2012 paper, “It is the activity, and the process, through which we humanize ourselves, over and over again.”

A prominent ethicist in the larger field of philosophy, Schapiro is now in her second year as a professor at MIT, having joined the Institute faculty from Stanford University in 2015. Schapiro’s current work flows from her career-long concerns as a philosopher: how we maintain universal principles of rational ethics while living as, in part, nonrational beings.

“I’m trying to give us a philosophical conception of what we’re doing when we try to live our lives well,” Schapiro says. “That is something I believe has a structure that we can anatomize in a rigorous way.”

Schapiro has found ethical issues compelling for almost her whole life. She grew up in suburban Chicago, in a Jewish family forced to flee wartime Europe.

“My mother was a Holocaust refugee,” Schapiro says. “That got me thinking pretty deeply about morality from a pretty early age.” By the time she was 6 or 7, Schapiro recounts, she had watched newsreels in school of World War II concentration camps. “My moral sensibility was probably pretty alive from an early age. And now I do ethics, so you can kind of draw a line from here to there.”

“I was very attracted to Kant’s moral philosophy because, for Kant, what is central is the idea of respecting other people — their autonomy, their freedom, their authority to make up their own minds about how to live their lives,” Schapiro explains. “It’s really an ethic of respect.”

Even while she was ensconsced in graduate school at Harvard, Schapiro’s teaching experience stayed with her. If universal respect for people’s autonomy is so important, why do we construct different rules and attitudes for, say, children than we do for adults?

After all, as a math teacher, Schapiro says, “I felt a moral tension between wanting to respect the kids and needing to manage the kids.” That led her to a philosophical question: “How can someone who’s attracted by Kantian ideals justify taking a more managerial attitude toward whole classes of people, like children?”

Schapiro’s dissertation, and a prominent 1999 paper she published, “What Is A Child?” analyzed this issue in depth; the work helped establish her scholarly reputation.

“If we were to treat children completely as we treat adults, we would just be abandoning them to their animal nature,” Schapiro says. “Children [are] on the way to becoming themselves … and that both justifies certain kinds of paternalism toward them but also shows us the limits of that paternalism. Our form of rule over them cannot interfere with them becoming people who can master themselves.”

After writing extensively on that issue and related topics for several years, Schapiro shifted her focus to her current work on reason and emotion. But as she acknowledges, there are some clear continuities in these phases of her career; both examine how we impose rationality and order on our emotional and maturing selves.

“A nobility in free thinking”

Schapiro joined the Stanford faculty in 2000, after three years at Harvard’s Society of Fellows, and stayed until 2015, when she moved across the country. Her husband is a theater director in Boston.

“I’m really loving MIT so far,” Schapiro says. “The philosophy department here has a reputation as being the friendliest in the country, and it’s really true. People enjoy it, and that creates a virtuous cycle.”

Schapiro says she enjoys a campus atmosphere at MIT that is “refreshingly unpretentious,” and she describes the undergraduates in her classes as “engaged, hard-working, curious, extremely smart, and fun to talk to.”

Naturally, most of the undergraduate students Schapiro works with — usually in small classes — are majoring in engineering or science fields, and not philosophy. But as Schapiro observes, “Sometimes that makes them hungrier for philosophy. I think all of them are aware that whatever they achieve as an engineer or scientist, they still need values to guide them.”

Philosophy, Schapiro emphasizes, entails rigor and discipline. But — perhaps echoing the substantive themes of her work — she thinks there is plenty of room for creativity and even joy as people search rationally for new answers to essential questions.

“I tell my undergraduate students that philosophy is thinking in slow-motion, and it goes very much against the current and the pace of contemporary life,” Schapiro says. “In order to do philosophy well, you have to shut off the Wi-Fi and shut off the phone, and read a small amount of dense material five times to really grasp its argument. But those who have any taste for philosophy will be rewarded when they do that. There is a nobility in the course of free thinking that disciplines itself.”