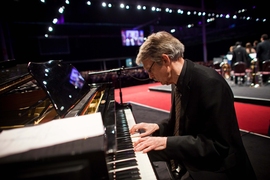 Attention, music fans: The new John Harbison album has dropped. The Nov. 2 release, titled “Diotima,” features three ambitious pieces from the repertoire of Harbison, the acclaimed composer and Institute Professor at MIT — who The New York Times once called “one of the finest American composers” of his generation, for his “willingness to transcend” prevailing conventions.

Two of the works on “Diotima” have never been recorded before: the title track, written for a full orchestra and premiered by the Boston Symphony Orchestra in 1977, and “Milosz Songs for Soprano and Orchestra,” premiered by the New York Philharmonic in 2006. Issued by BMOP/sound, the label of the Boston Modern Orchestra project, the album also includes Harbison’s Symphony No. 6, from 2012. MIT News spoke with Harbison about the recording.

Q: The title piece of this album, “Diotima,” is a 1976 orchestral work referring to the writings of both the German poet Friedrich Hölderlin and Plato. What is the piece about?

A: That piece was my first for a large orchestra. Until I got into the piece I really didn’t realize how different the [compositional] opportunities and responsibilities were. I was then, and am now, very interested in the culture of ancient Greece. I was reading Hölderlin and all the Germans of the Bach era who were also very interested in Greece. In Hölderlin, it’s always about loss.

Q: What should we listen for on this album?

A: The CD is a starting and end point [in my career] for one of the most challenging regions in which we compose, the orchestra. The hardest thing about the full orchestra sound is to individualize it every time. That’s always been what’s interested me. Every full orchestra moment in a Stravinsky piece, for instance, is cockeyed and working very hard not to be generic. I think the listener to these pieces will find one common thing, which is, something’s always missing, or not functioning on all the cylinders we expect from our most familiar encounter with the orchestra — the Hollywood film, which has conditioned the ears of virtually everyone who hears a full orchestra today.

Q: This album has three pieces. What links them together, for you?

A: All three pieces on this disc are about the unrealizable vision of both the ancient and the modern world — the aspirations, both personal and collective, that are out of reach. That’s what Hölderlin, in those giant odes, is trying to convey, that in the loftiest address, he finds himself both lost and unfulfilled. As composers we’re chroniclers of what we think is authentic. “Diotima” strives and strives for a big lyrical ideal, and then with the help of Hölderlin’s conclusion, it essentially says “No, we’re not getting there.” What I don’t feel we have, in the world I’m in, at least, is the [grand, triumphal] end of Beethoven’s 7th or 9th symphonies. That was available to Beethoven, in his vision of the destiny of the human spirit. I don’t find that in my world. I always need to do something that denies that.

That’s [also] in the much later piece on this CD, the “6th Symphony,” which has recourse to a poem by James Wright, in which he also imagines a vision of the ancient world. I was fortunate to get access to more writing about his thoughts on that period from his widow, Annie Wright, an extraordinary person.

Q: The second piece features songs using the poems of the Polish-American poet Czeslaw Milosz. What drew you to his work?

A: His range is so large and his experience is so apocalyptic. For him, daily life has largeness. Milosz’s experiences are much more violent and wild than anything I’ve ever known. He was in a nation that other nations just walked across repeatedly [militarily], and of course he was exiled, and ends up in Berkeley, California, looking back on all that. I had been very aware of him as a regular poetry reader — a huge poet with unbelievable range. He is so intent upon making all of his experiences not seem anomalous but absorbable. The lines are packed with both emotion and fact.

Q: It seems like a motif of this album that it features risks you’ve taken — new explorations in composition. Is that fair?

A: Writing the “6th Symphony” was an amazing experience. I was teaching at Tanglewood and the late-night hours were most productive. I wound up with pieces [of the symphony] spread out in this little apartment, moving them around, and the result is, some parts will recur in another movement, which is something I had  always been uncomfortable with.

Composing “Diotima” was quite different, because “Diotima” keeps not being able to leave behind its initial purpose. … The way I thought about music in those days is that our job is to identify the center of this piece and wrestle it to the ground. By the “6th Symphony,” I didn’t know what that center was, but something was bleeding out of that James Wright poem. I had a feeling: This is going to fit together in a way I don’t know about right now. That would have seemed very irresponsible to me as a composer in my 30s.

Q: It’s great hearing you describe this, because it helps us understand your pieces from the inside out.

A: A lot of the composer’s responsibility is, you want the listener to be as inside as you can get them. I listen to a lot of new music, and I listen in bafflement sometimes. But I am happy with pieces where, even if it’s all new as an experience, I don’t feel baffled. Something purposeful is going on, and I’ll get there. In the journey of the composer who works for a long time, that’s what changes the most, how you get there.