Longtime MIT professor who laid the foundations for the development of index theory was a recipient of both the National Medal of Science and the Abel Prize.
Watch Video
Department of Mathematics
Publication Date:
Press Inquiries 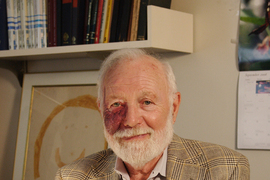 Caption:
Isadore Singer is seen here with his Atiyah-Singer Index Theorem, which, with Michael Atiyah, deeply and irrecoverably tied together the mathematical fields of analysis, geometry, and topology.
Credits:
Photo courtesy of the MIT Museum

In a career that spanned more than 50 years, Singer not only profoundly affected the development of mathematics, but discovered connections between math and physics that led to the creation of a new field, index theory. Singer was the recipient of numerous awards and honors for his pioneering work, including the National Medal of Science and the Abel Prize, often considered the Nobel Prize of mathematics.

Among his greatest achievements, Singer and Richard Kadison formulated the Kadison-Singer Conjecture in 1959 as part of their work on formalizing the foundations of English physicist Paul Dirac’s quantum mechanics. It was later found to be equivalent to key problems in applied mathematics, engineering, and theoretical computer science and was proved only in 2013, more than half a century years after it was initially posed.

In 1963, Singer and Michael Atiyah hit upon an even more profound connection with the Atiyah-Singer Index Theorem. This theorem deeply and irrecoverably tied together the mathematical fields of analysis, geometry, topology. A key part of their work was Singer’s rediscovery and generalization of the Dirac operator, fundamental to the understanding of the quantum theory of the electron. The newly generalized Dirac operator unlocked deep mysteries in mathematics, setting mathematics and physics on a collision course that continues to play out to this day.

Since first arriving at MIT in 1950, Singer always credited the Institute for giving him the freedom to pursue that interdisciplinary research. For years, his well-known weekly physics-mathematics seminar served as a hotbed for new ideas, inspiring new collaborations between mathematicians and physicists.

His success was all the more remarkable because of his humble beginnings. Born May 3, 1924, to Polish immigrants, Singer grew up in Detroit during the Great Depression in a household where money was tight. His father was a printer and his mother was a seamstress; his younger brother, Sidney Singer, would later become a particle physicist at the Los Alamos National Laboratory.

Singer attended the University of Michigan on a scholarship, where he worked in Professor Harrison Randall’s spectroscopy lab. He often recalled how he sold the weekly football tickets that Michigan students were given to pay for his food. After graduation, he served as a Signal Corps lieutenant in the Philippines, before attending graduate school.

Singer’s drive for understanding physics through mathematics was already formed by this time. “My inclination toward intellectual pursuits was encouraged by my English and chemistry teachers in Central High School, Detroit. I majored in physics at the University of Michigan (1941-1944) but regret not availing myself of their marvelous mathematics department,” Singer said in a lecture at the Smithsonian in 1979. “Puzzled by both relativity and quantum mechanics, I tried to master both these subjects while serving in the U.S. Army. Having failed, I concluded I needed a year of mathematics before I returned to physics, and I became a graduate student at the University of Chicago in 1947. That [one] year stretched to a [lifetime].”

Singer graduated from the University of Chicago with both a master’s (1948) and doctorate (1950) in mathematics, studying under Irving Segal. He later attributed his strong background in analysis to Segal’s instruction. During Singer’s final graduate year, mathematician Shiing-Shen Chern arrived from Europe to introduce American scholars to the latest advances in geometry. Singer took notes from Chern’s class that were to prove critical to developing his research program in differential geometry at MIT. 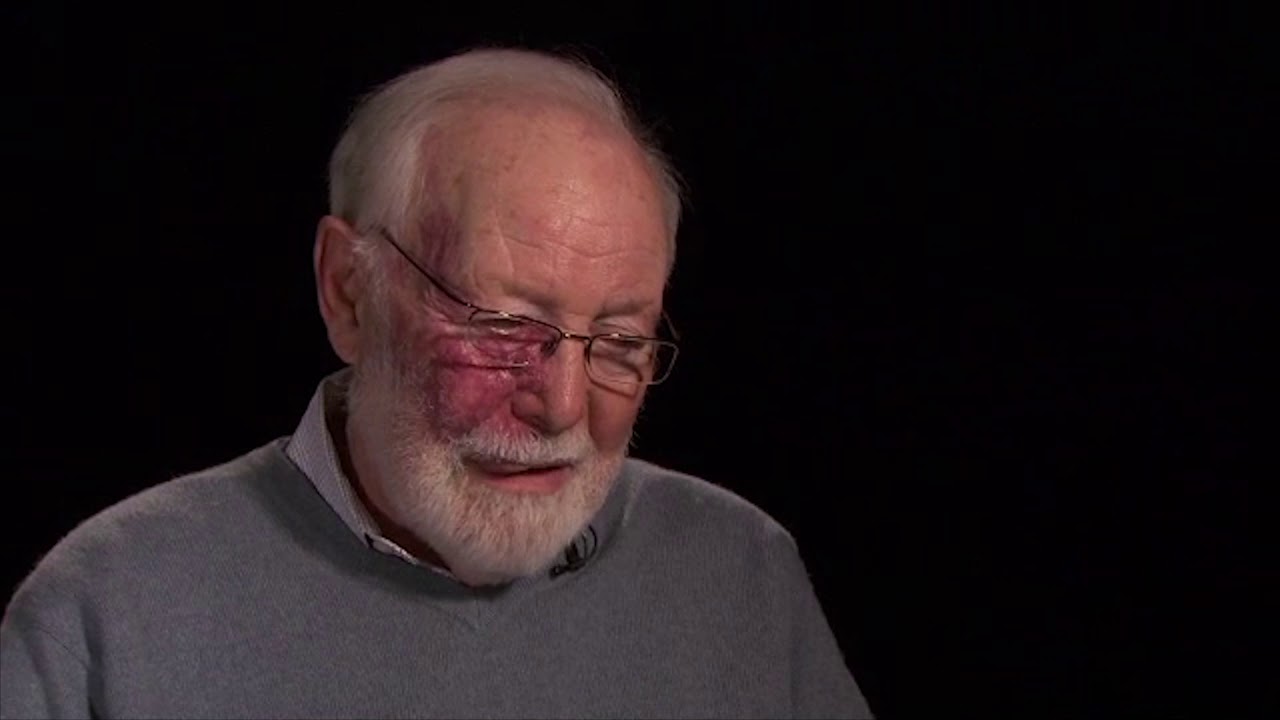 Singer arrived at MIT in 1950 as a CLE Moore Instructor working with Warren Ambrose and influenced by George Whitehead. Often, when they were working late on geometry as revolutionized by Chern, he and Ambrose would head over to Jack and Marion’s, then a popular deli on Harvard Street in Brookline, Massachusetts, to order rounds of corned beef sandwiches and coffee, and keep working until the early hours of the morning.

“What with interpreting my notes [from Chern’s University of Chicago lectures], reading Chern’s papers and Ambrose insisting on absolute clarity in every detail, we learned differential geometry together,” he said in a tribute to Ambrose. Equally important, “Ambrose taught me jazz.”

Between 1952 and 1956, Singer took appointments at UCLA, the Institute for Advanced Study, and Columbia University. He made deep contributions to analysis and geometry during this period.

In 1963 Singer’s career took a decisive turn during a sabbatical at Oxford University at the invitation of Michael Atiyah. Within the first day, Atiyah challenged Singer to look further into a well-established theorem in topology.

“What Michael had in mind are what are now known as integrality theorems, explaining why certain integrals are integers,” Singer later stated. Atiyah’s query was compelling to Singer, who couldn’t stop thinking about it. In six or so weeks, he approached Atiyah with an answer.

“Surprisingly, it involved analysis and the generalization of the Dirac operator to Riemannian spin manifolds,” Singer said. “I explained to Michael what I thought was going on and how most of the known integrality theorems fit together using the Dirac operator. It was not hard to conjecture the index formula; we obtained the proof of the index theorem in September.”

The major implications of their theorem would become clear only years later. Looking back, Singer would recall: “In 1962, while a Sloan Fellow ... Michael Atiyah and I discovered an index theorem that combined topology, geometry, and elliptical partial differential operators in a new way. Our results extended, unified, and gave insights to some older theories. Exploring the consequences of this startling combination of different fields has kept us busy since then. Deep applications continue to be discovered. Some of the most interesting ... are in high-energy theoretical physics. Mathematicians and physicists now realize the underlying gauge theories is the mathematical structure of fiber bundles. As a result, global geometry has applications to elementary particle physics, and at the same time, physicists are asking many new geometric questions. It is exciting to search for the answers.”

After the work on the index theorem, Singer’s career moved closer to the theoretical high-energy physics community, making numerous contributions there including to gauge theory, the theory of quarks, and anomaly cancellation.

His work garnered a tremendous number of distinctions. Singer was a Sloan Research Fellow from 1959 to 1962, and twice received a John D. Guggenheim fellowship in 1968 and 1975. In 1969 he received the Bôcher Memorial Prize from the American Mathematical Society. In 1985 he was awarded the National Medal of Science. The following year, Singer was selected for MIT’s highest faculty appointment as Institute Professor. In 1988 he received the Eugene Wigner Medal. In 1993, he was honored with the Distinguished Public Service Award, and in 2000 the Leroy P. Steele Prize for Lifetime Achievement, both by the American Mathematical Society. In 2004, Singer, jointly with Sir Michael Atiyah, received the Abel Prize from the Norwegian Academy of Science and Letters, and he was selected for the 2005 MIT James Rhyne Killian Faculty Achievement Award.

Singer’s service to the mathematical and broader scientific community was also prodigious. He chaired the Committee of Science and Public Policy of the National Academy of Sciences from 1973 to 1979. He co-founded The Mathematical Sciences Research Institute (MSRI) in 1982 with Shiing-Shen Chern and Calvin Moore. From 1982 to 1988, Singer served on the White House Science Council. He was a member of the President’s Committee for selection of the National Medal of Science, ending in 1989. Between 1995 and 1999, he was on the governing board of the National Research Council.

Singer was equally committed to teaching. Singer advised many graduate student advisees — 31 from MIT and 2 from the University of California at Berkeley — and had nearly 200 mathematical descendants. Among these students were Dan Burns, Dan Freed, Dan Friedan, John Lott, Hugo Rossi, Linda Rothschild, and Nancy Stanton. He was a mentor to computer scientist Lenore Blum, helping her get into graduate school in 1963. Singer also influenced the budding young MIT student James Simons, who after a distinguished but short career in mathematics went on to a hugely successful career in finance and philanthropy.

Even late into his career, Singer insisted on teaching undergraduates, volunteering to work for several semesters as a teaching assistant for the introductory calculus course for first-year students at MIT. He liked to say that empathy made him a good teacher.

Institute Professor Emeritus Isadore Singer, who became “one of the most important mathematicians of his era,” has died at age 96, reports Julie Rehmeyer for The New York Times. “Dr. Singer created a bridge between two seemingly unrelated areas of mathematics and then used it to build a further bridge, into theoretical physics,” writes Rehmeyer. “The achievement created the foundation for a blossoming of mathematical physics unseen since the time of Isaac Newton and Gottfried Wilhelm Leibniz.”