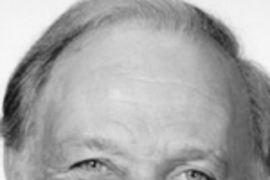 Caption:
Isadore M. Singer
Institute Professor Isadore M. Singer shares the 2004 Abel Prize for the discovery and proof of a theorem that is one of the great landmarks of 20th-century mathematics.

The Abel, which has been likened to the Nobel Prize, but for mathematics, was announced by the Norwegian Academy of Science and Letters March 25. The prize was awarded for the first time in 2003.

Singer and Sir Michael Francis Atiyah of the University of Edinburgh will receive the prize from King Harald of Norway on May 25. They will share $875,000 "for their discovery and proof of the index theorem, bringing together topology, geometry and analysis, and their outstanding role in building new bridges between mathematics and theoretical physics," the academy said in its announcement.

The two are also being honored for being instrumental in repairing a rift between the worlds of pure mathematics and theoretical particle physics, initiating a cross-fertilization that has been one of the most exciting developments in recent decades.

"I am delighted to win this prize with Sir Michael," said Singer. "The work we did broke barriers between different branches of mathematics and that's probably its most important aspect. It has also had serious applications in theoretical physics. But most of all I appreciate the attention mathematics will be getting. It's well deserved because mathematics is so basic to science and engineering.

"I've been at MIT on and off for most of 50 years, and the support MIT has given me has been very special and important in my own research. MIT is an enabling institution that allows people to do 'their thing' very well."

According to Professor David A. Vogan, head of MIT's Department of Mathematics, "Isadore Singer has been the very best kind of intellectual leader, in every way imaginable--from doing great mathematics himself, to teaching undergraduates, to bringing great mathematicians to MIT.

Vogan describes how when he came to MIT as a graduate student in 1974, "almost the first course that I took was from Isadore Singer. The first lecture was delivered by Atiyah. That lecture was over my head, but close enough to admire."

"After listening to Singer for the rest of the semester, I began to understand a little. Thirty years later I'm still listening, still blown away, but more admiring all the time," said Vogan.

Scientists describe the world by measuring quantities and forces that vary over time and space. The rules of nature are often expressed by formulas, called differential equations, involving their rates of change. Such formulas may have an "index," the number of solutions of the formulas minus the number of restrictions that they impose on the values of the quantities being computed. The Atiyah-Singer index theorem calculated this number in terms of the geometry of the surrounding space.

A simple case is illustrated by a famous paradoxical etching of M.C. Escher, "Ascending and Descending," where the people, going uphill all the time, still manage to circle the castle courtyard. The index theorem would have told them this was impossible.

In the 40 years since its discovery, the theorem has had innumerable applications, first within mathematics and then, beginning in the late 1970s, in theoretical physics: gauge theory, monopoles, string theory, and the theory of anomalies.