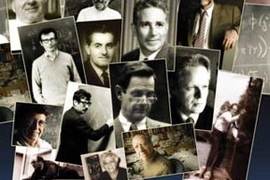 A new book, "Recountings: Conversations with MIT Mathematicians," tells the story of the rise of MIT's Department of Mathematics through the eyes of 13 influential MIT mathematicians.

The book traces the development of these individuals, who describe their first attraction to mathematics and the inspiration of past giants in the field.

MIT's math department is one of the strongest in the world, representing a broad spectrum of fields ranging from the traditional areas of pure mathematics such as analysis, algebra, geometry and topology, to applied mathematics areas such as combinatorics, computational biology, fluid dynamics, theoretical computer science and theoretical physics. The department currently has about 50 faculty members, many of whom have received the highest distinctions including an Abel Prize, a National Medal of Science, two MacArthur Awards, and BÃ´cher, Cole, Veblen, Fulkerson and Steele prizes.

"Recountings: Conversations with MIT Mathematicians," is edited by Joel Segel, a writer whose father, Lee Segel, received a PhD in applied mathematics from MIT in 1959. The book will be published by AK Peters on Dec. 31.