Ijeoma Oluo: “What we are fighting for is Black joy” 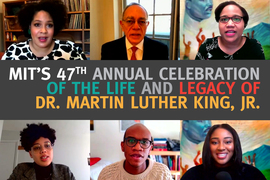 In a moving and deeply personal address at MIT’s annual celebration of the life and legacy of Martin Luther King Jr., bestselling author and speaker Ijeoma Oluo described her journey toward a life’s work focused on issues of racial equity and justice. She urged the audience to go beyond merely working to remove the most overt manifestations of racial injustice, and toward a full rethinking of social, educational, and work structures that limit the full expression of people’s identity.

As important as the ongoing struggle is, it’s not enough just to work against racial injustice, she said, “if we are not spending at least as much effort to building up our community, building space for joy.”

Oluo, a Seattle-based author of the New York Times bestseller “So You Want to Talk About Race,” has written for the Washington Post, Time, and the Guardian, among others. Before turning to writing, she spent more than 10 years in the tech industry. “It was that environment that brought me to what I do,” she said.

Even in famously liberal Seattle, she said, “I needed people to understand why [racism] was an issue we needed to talk about. I got tired of living my days in spaces where I could only live part of my life.” So, she quit her job and has devoted her career to writing about issues of race and equity in this country. “What I realized was that often in order to survive, people of color, especially Black and Native people in this country, have to shut down part of themselves,” she added.

It’s important not to turn away from the injustices around us, she said, but to face them squarely. “When we engage in the work, when we open ourselves up to it and say, no we will face this, and we will not face it alone, we also open ourselves to the joy that we cannot feel when we are too afraid of losing it.”

For universities, “It is not enough to try to reduce the harm being done,” Oluo said. Rather, institutions must “fully embrace a joyous experience for Black students, staff, and faculty. It is important to recognize that your college years are supposed to be years of exploration and freedom and joy and friendship, but for many students of color, especially for many Black students, these are years that are simply survived.”

“Our Joy, Our Liberation” was the theme of this year’s MLK Celebration, the 47th such annual event held by MIT. The celebration usually takes the form of a luncheon or breakfast on campus but was held online this year. The program retained its traditional format, with multiple speakers as well as musical performances, plus tributes to five recipients of this year’s MLK Leadership Awards – senior Dayme Delgado, graduate student Marisa Gaetz, MIT Sloan Assistant Director of Undergraduate Education Natalie Petit, Professor Helen Elaine Lee, and the PRIMES program for high school students.

Before introducing Oluo as the keynote speaker, MIT President L. Rafael Reif spoke of the difficult past year, saying, “In some aspects of that experience, we are all united — united in the sudden disruption, the isolation, the frustration, and uncertainty. But as this year unfolded, what became increasingly obvious was the unevenness of those impacts. From Covid, to America’s political turmoil, to the nation’s ongoing racial reckoning, the struggles of this year have hit some much, much harder than others. And as we have all seen, among those carrying the greatest burdens have been our communities of color, including here at MIT.”

In response to that, Reif said, everyone must strive harder than ever to ease these burdens, “whether we are fighting climate change and environmental injustice, or shaping the work of the future, or inventing tomorrow’s technologies or educating our students to work for the betterment of humankind.”

He added that we also must “listen as closely as we can to the voices of people outside our sphere of comfort,” and also “make MIT a place where every one of us can feel at home and feel the liberty to do our best work.”

Corban Swain, a graduate student in biological engineering, in his remarks said that at MIT, “we have to question if it’s enough to be proponents of diversity and inclusion.”

Quoting Dafina-Lazarus Stewart, he said, “Diversity asks: Who’s in the room? Equity responds: Who is trying to get in the room but can’t? Whose presence in the room is under constant threat of erasure? Inclusion asks: Is this environment safe for everyone to feel like they belong? Justice challenges: Whose safety is being sacrificed and minimized to allow others to be comfortable maintaining dehumanizing views?’”

Swain asked, “Can we stretch our imaginations to take actions that uphold equity and justice holistically?” He said that “I want us to see liberation as bound to the humanization of the most minoritized among us, even when it comes at a significant sacrifice of our own. Let’s honor the marginalized not on our terms, but theirs.”

Senior Mimi Wahid spoke of growing up in a southern city that was known as “Klansville,” and the emotional impact of her first real academic job when she was researching the history of lynchings. “I was excited to be doing something meaningful,” she said, but the experience was hard emotionally. “I understood the work was necessary, but the toll was real,” she said. “Joy will come from the work of reconciling with the past and imagining a better future.”

Lana Scott, manager of media services for MIT’s Open Learning and the event’s first staff speaker, recalled the guidance she received from her father when she was a child experiencing bullying and racism at school. “Don’t let them take your joy away from you,” he would tell her. If he were alive today, she said, her father would be saying, “We’ve been through a lot, beaten, broken, but we made it. It’s not over, racism will never be over, but look at what we did in spite of it. Look at Obama, a Black president. I grew up with segregated bathrooms, restaurants, churches, being spat on, called names. And for eight years, a Black man was in charge of everything. A Black woman is vice-president. We go through pain, but we persevere.”

His advice to her, she said, would be “Don’t be quiet. Make some noise! You have a voice! The trauma that lives inside of you will not define you. It will inspire you and you’ll start to see the joy. Resistance is to choose to enjoy every aspect of your life. Use it to rise!”

MLK Luncheon speaker describes “dealing with scars nobody can see”